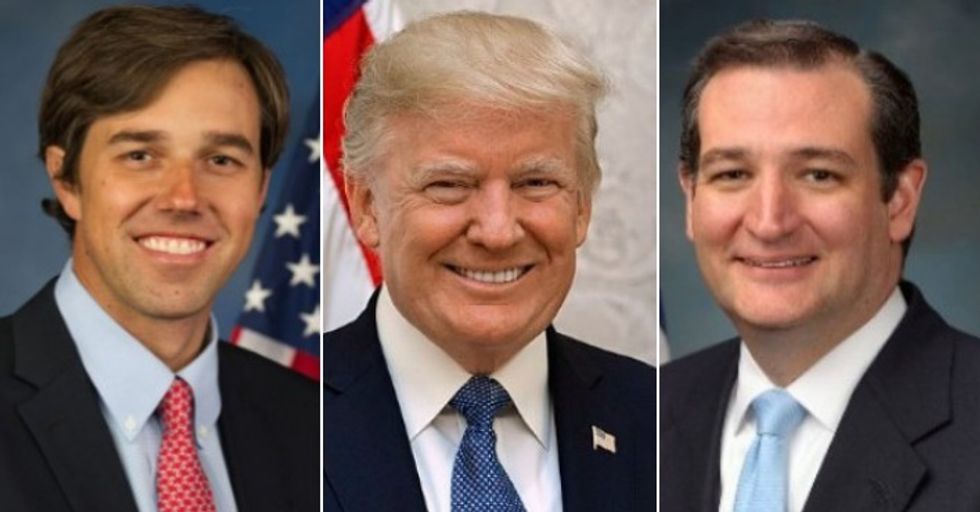 Republican incumbent Senator Ted Cruz is in a tight race to retain his Senate seat. Canadian born Cruz faces El Paso born and raised Democrat Beto O'Rourke who hopes to trade in his seat in the House of Representatives for Cruz's seat in the Senate.

With the competition tight and time running out, President Donald Trump took to Twitter Friday to try to bolster Cruz's support in Texas by attacking O'Rourke. In his tweet, the President said:

"Beto O’Rourke is a total lightweight compared to Ted Cruz, and he comes nowhere near representing the values and desires of the people of the Great State of Texas. He will never be allowed to turn Texas into Venezuela!"

But people never forgot that back during the 2016 presidential campaign, candidate Trump had something very different to say about Ted Cruz. And his wife. And his father.

@realDonaldTrump Is there another tweet today or was this your full purge of BS, exaggerations and fear mongering r… https://t.co/xToJG7cmCu
— The Wiseman Said🗨️ (@The Wiseman Said🗨️) 1539974112.0

@realDonaldTrump So Lyin' @tedcruz, whose dad killed Kennedy, is bringing you to Houston with his ugly wife to fill… https://t.co/WODGUCnNAK
— Nita Cosby (@Nita Cosby) 1539974788.0

@realDonaldTrump Sure Donnie, Ted Cruz can’t even stand up to a putz like you calling his wife a dog and accusing h… https://t.co/rAAYFHFiAb
— Hadley Sheley (@Hadley Sheley) 1539976233.0

@realDonaldTrump Are you talking of the guy you nick named "Lyin' Ted", and insulted his WIFE ON TWITTER BY PERSONA… https://t.co/QNNgbWSenb
— Bonnie Boden (@Bonnie Boden) 1539974740.0

Others did not see an endorsement from Trump as a positive for Cruz.

On Thursday, another President posted their endorsement of Beto O'Rourke for Senate. Vicente Fox Quesada, the former President of Mexico, posted a video on his Twitter feed supporting O'Rourke. He captioned his video:

"[Beto O'Rourke], what a candidate you are! You not only understand America, you know about humanity. This is what the U.S. needs: someone compassionate yet firm. I stand with you because I believe you’re what America needs."