It's a perfect match. 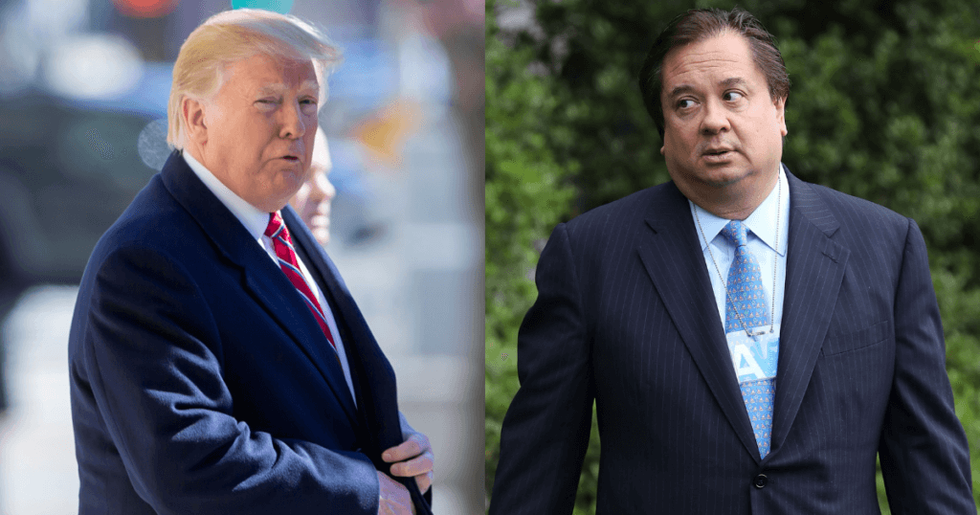 After President Donald Trump spent much of Saint Patrick's Day rage tweeting, George Conway, the spouse to one of Trump's closest advisors, is warning that the president may be suffering from two diagnosable psychological conditions as outlined in the Diagnostic and Statistical Manual of Mental Disorders.

"*All* Americans should be thinking seriously *now* about Trump’s mental condition and psychological state, including and especially the media, Congress—and the Vice President and Cabinet."

Agree with this, but would add that *all* Americans should be thinking seriously *now* about Trump’s mental conditi… https://t.co/3ngSwxOlf8
— George Conway (@George Conway) 1552907733.0

Conway also included Antisocial Personality Disorder in his alarm-sounding about Trump's increasingly erratic behavior. APD has symptoms such as excessive lying, impulsiveness, aggression, and the inability to show remorse.

Granted, Conway is not a mental health professional. But Trump's blizzard of tweets from Sunday into Monday carry many of the characteristics associated with those two conditions.

It began Sunday morning. Trump was unhappy about his portrayal on a rerun of Saturday Night Live and suggested that the show should be penalized for satirizing his likeness. (NPD)

He then claimed, falsely, that the Russia investigation was launched over the infamous Christopher Steele dossier. (APD)

As Trump continued his Twitter fit, he whined about the suspension of Jeanine Pirro by Fox News and the closure of a General Motors plant in Ohio. (NPD)

It was shortly after this, however, when the president crossed the line from unhinged to reckless.

He accused Democrats of trying to steal the 2016 election and hinted that it would happen again next year. (APD)

"What the Democrats have done in trying to steal a Presidential Election, first at the “ballot box” and then, after that failed, with the “Insurance Policy,” is the biggest Scandal in the history of our Country!"

Conway thinks the writing is on the wall.

So does conservative Bill Kristol.

To Republicans who've been inclined to acquiesce in a Trump re-nomination in 2020: Read his tweets this morning. Th… https://t.co/XjoHLDSmwc
— Bill Kristol (@Bill Kristol) 1552830963.0

Trump has the nuclear codes, after all, yet no one with the power to do something seems to be willing to act.

Then came the humblebrag about his approval ratings. (NPD)

Joe Biden got tongue tied over the weekend when he was unable to properly deliver a very simple line about his deci… https://t.co/HCBKB5DZg0
— Donald J. Trump (@Donald J. Trump) 1552914854.0

And, of course, Trump maintains that he had nothing to do with Friday's terrorist attack in New Zealand, despite the white supremacist shooter naming Trump and his anti-Muslim rhetoric as an inspiration. (APD)

The fears of Conway and others do not exist in a vacuum. Last November, after Trump lavished praise upon himself following the midterms, Rolling Stone interviewed mental health professionals who believe Trump is a ballooning danger.

“I mean, everyone’s shell-shocked," said John Gartner, a clinical psychologist. "It’s almost beyond this fine point of diagnosis — just the sense that someone who is very ill and dangerous is completely out of control, and no one seems to be stopping him.”

The pathology is readily apparent.

“People like Donald Trump who have severe narcissistic disturbances can’t tolerate being criticized,” said Lance Dodes, a former professor of psychiatry at Harvard Medical School, “so the more they are challenged in this essential way, the more out of control they become. They change reality to suit themselves in their own mind.”

Gartner added that the tensions between Trump and the Democrat-controlled House of Representatives will only drive Trump further into madness.

“The more desperate he is, the more aggressively and the more recklessly he’s going to lash out — and not just lash out on Twitter, but really lash out in ways that are destructive to the bones of our institutions," Gartner said. "So, he’ll try to declare criminal investigations on his enemies or anyone who criticizes him. He’ll fire everyone involved in the Mueller investigations. He’ll fire Sessions. He’ll ramp up his attack on civil liberties and the rule of law. He’ll escalate his incitement to violence, whether it’s supporting white nationalists or demonizing minority populations. Things that we think, ‘Oh, he could never do that, because that would be so outrageous,’ he can and he will. There’s no restraints here. There’s nothing he won’t do. And if it’s enormously destructive, that’s not actually a negative for him, that’s a positive.”