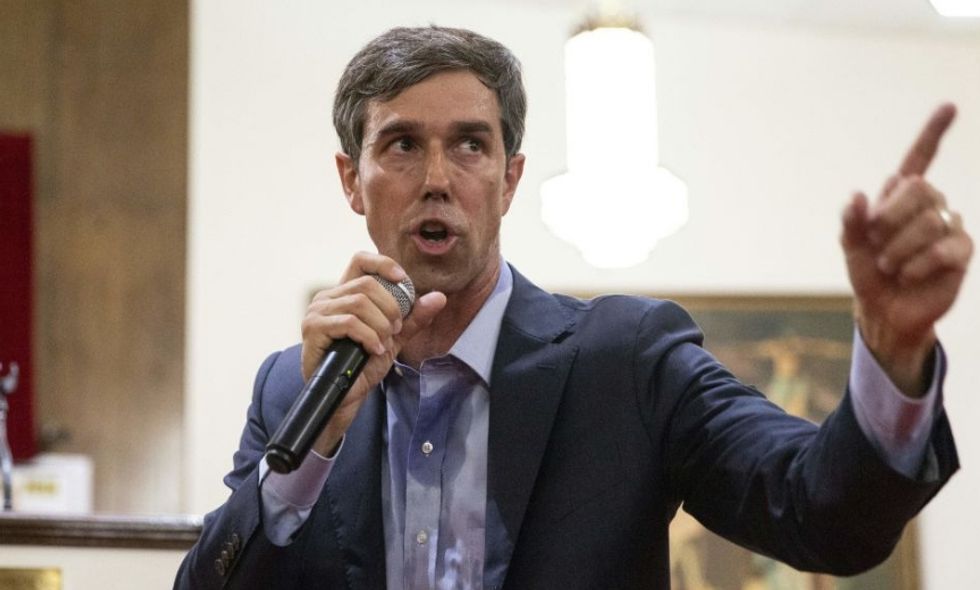 Texas Democratic candidate for Senate Beto O'Rourke has been transforming the state's political landscape with his progressive platform and Texans' embrace of it.

While speaking to a crowd at Good Street Baptist Church in Dallas, O'Rourke spoke out passionately against the murder of Botham Jean, the young African American man who was killed in his own apartment when a white police officer mistook his apartment for her own.

Off-duty police officer Amber Guyger shot Jean in his own home, supposedly mistaking him for a burglar. Guyger remains on paid administrative leave despite facing charges for manslaughter. In a move that angered many Texans, a search warrant was granted for Jean's apartment (rather than Guyger's) where authorities found a small amount of marijuana in his kitchen.

O'Rourke said about the shooting:

"How can it be, in this day and age, in this very year, in this community, that a young man, African-American, in his own apartment, is shot and killed by a police officer and when we all want justice and the facts and the information to make an informed decision, what's released to the public? That he had a small amount of marijuana in his kitchen. How can that be just in this country? How can we continue to lose the lives of unarmed Black men in the United State of America at the hands of white police officers?”

The crowd immediately rose to its feet in a standing ovation, hailing O'Rourke's testament, with many appearing to be in tears.

You can watch it for yourself below:

But it wasn't just those lucky enough to witness the rousing speech who were lauding O'Rourke's unambiguous stance. Twitter immediately began praising the candidate.

Beto O’Rourke continues to remind everyone why we kneel speaking about the unjust murder of Botham Jean. To the b… https://t.co/0OwdCB6MGB
— StanceGrounded (@StanceGrounded) 1537221803.0

Glad to see @BetoORourke speaking out on the murder of #BothamJean - an injustice that's ongoing, as police try to… https://t.co/U0oAxR26Ne
— Leah Greenberg (@Leah Greenberg) 1537229158.0

Some compared his charisma and courage to that of other legendary politicians.

@sahluwal @BetoORourke reminds me of @BarackObama. It's his intelligence and the way he speaks with that confidence… https://t.co/L1hn0bTCJi
— Victor Richardson (@Victor Richardson) 1537237772.0

Meanwhile, the statement on Botham Jean from O'Rourke's opponent Ted Cruz stands in diametric opposition. Ted Cruz's statement is being widely rebuked for grasping at straws in a case of home invasion--however inadvertent--that resulted in someone's murder.

it may well be that two lives were destroyed that night. That obviously the individual that was at home in his apartment and found himself murdered—that is horrific and a nightmare...It’s possible what happened was a horrifying and horrific misunderstanding. Or it may be something else...I wish Beto O’Rourke and Democrats weren’t so quick to always blame the police officer.

"Found himself murdered." The use of the passive tense tries to absolve guilt from the actions of a shooter who kil… https://t.co/yqCcEeb9Ro
— Yolanda Pierce (@Yolanda Pierce) 1537277975.0

Here’s @tedcruz talking about #BothamJean over the weekend: “The individual ... was at home in his apartment and f… https://t.co/h4eita2ExN
— Andrew Weinstein (@Andrew Weinstein) 1537247133.0

Polls show that O'Rourke is gaining ground on Cruz. While the Texas senate race is sure to be a nail-biter, if O'Rourke keeps courting all voters of Texas from a place of empathy and passion, he may well clutch the win.