Congresswoman Marjorie Taylor Greene (R-GA) continues to face backlash for endorsing multiple conspiracy theories and calls for the execution of her now-colleagues on social media before her election.

Greene has previously expressed support for the QAnon conspiracy theory, which hinges on the delusion that former President Donald Trump was sent to expose a network of satanic cannibal pedophiles secretly controlling the United States government.

She's suggested that mass shootings in the United States are coordinated by Democratic lawmakers to weaken public support for the Second Amendment. Greene has also supported a deranged lie that former Secretary of State Hillary Clinton murders children and drinks their blood.

Now, yet another conspiracy theory supported by Greene has come to light and this time it has to do with the devastating California wildfires in November 2018 which killed nearly 100 people. 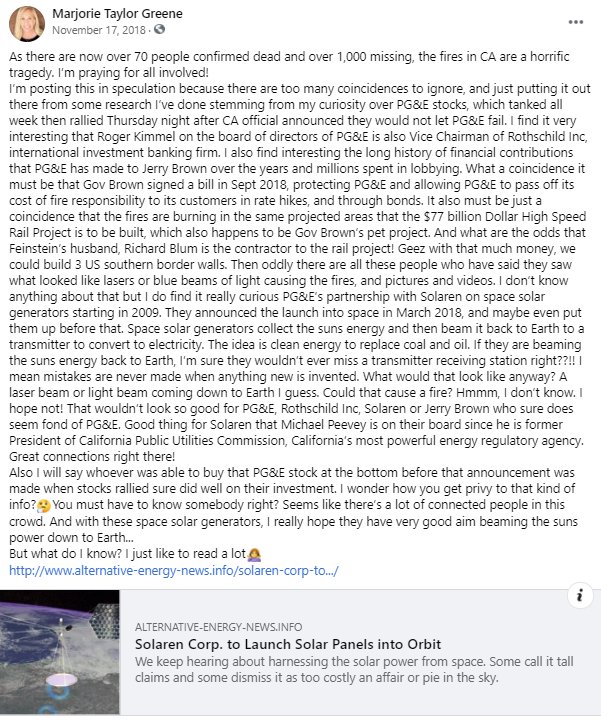 Greene said there were "too many coincidences to ignore," suggesting that California lawmakers coordinated laser beams to strike the terrain and potentially clear the way for a high-speed rail.

The theory has been a component of the broader QAnon conspiracy web and has roots in the longstanding anti-semitic trope that wealthy Jewish people—in Greene's case, the Rothschilds—have deep influence on the machinations of global power.

"If they are beaming the suns energy back to Earth, I'm sure they wouldn't ever miss a transmitter receiving station right??!! I mean mistakes are never made when anything new is invented. What would that look like anyway? A laser beam or light beam coming down to Earth I guess. Could that cause a fire? Hmmm, I don't know. I hope not! That wouldn't look so good for PG&E, Rothschild Inc, Solaren or Jerry Brown who sure does seem fond of PG&E."

At my bar mitzvah I was given a space laser from the Rothschilds (as is every jewish boy upon becoming a man). It's not a big deal. I used mine to clear space for high speed rail in CA. Again, no big deal.
— david cross✍ (@davidcrosss) January 29, 2021

THIS is a Jewish space laser. Don't f...k with me, ⁦⁦@mtgreenee⁩. pic.twitter.com/Xcl4TEUvBv
— Marianne Williamson (@marwilliamson) January 29, 2021

May I present to you: the Jewish Space Laser pic.twitter.com/93CR1LfRGv
— Grace Friedman (@FriedmanGrace) January 29, 2021

You think the Qanutters are mad now? Wait until they find out we've been storing the Jewish Space Lasers in the Comet Pizza Parlor's basement and only Hillary Clinton knows the launch codes.
— Joshua Gale (@joshuafett75) January 29, 2021

Don't anyone even THINK of starting a band called Jewish Space Lasers, because I'm already on it.
— michael musto (@mikeymusto) January 29, 2021

Jewish Space Lasers are not a thing. But with YOUR help, they CAN be! Donate to the #SorosAntifaLaserFund TODAY and get a 15% discount on all your purchases.
— Thorisy (@Th0risy) January 29, 2021

Though the theory is comical in its absurdity, Twitter users reminded their followers of the underlying anti-semitism predicating it.

All jokes aside, from “Jews shall not replace us" shouted in Charlottesville; to QAnon; to Camp Auschwitz & 6MWNE t-shirts worn by rioters on Jan.6; to Marjorie Taylor Greene suggesting Jewish space lasers started forest fires, rising anti-Semitism is no joke at all #JewsSpeakUp
— Marianne Williamson (@marwilliamson) January 29, 2021

We laugh at the space lasers because it's ridiculous and because for Jews, humor is survival. But we can't ignore conspiracy theories or the people spreading them, because conspiracy theories about Jewish power have gotten us killed and probably will again.
— hodel in the streets, chava in the sheets (@mrotzie) January 29, 2021

Stop glossing over the blatant racism & anti-Semitism of the QAnon movement. This is not a new conspiracy theory phenomenon. Folks have been doing this for centuries & without using social media. This is about ideological & structural whiteness. https://t.co/1dJjhVqpAG
— Unite in justice for the poor & oppressed (@BreeNewsome) January 29, 2021

Congressman Jimmy Gomez (D-CA) has introduced a resolution to expel Greene from Congress.