A QAnon Conspiracy Theorist Just Explained Why She's Overjoyed About Julian Assange's Arrest and, Yeah, It's as Bonkers as You'd Expect 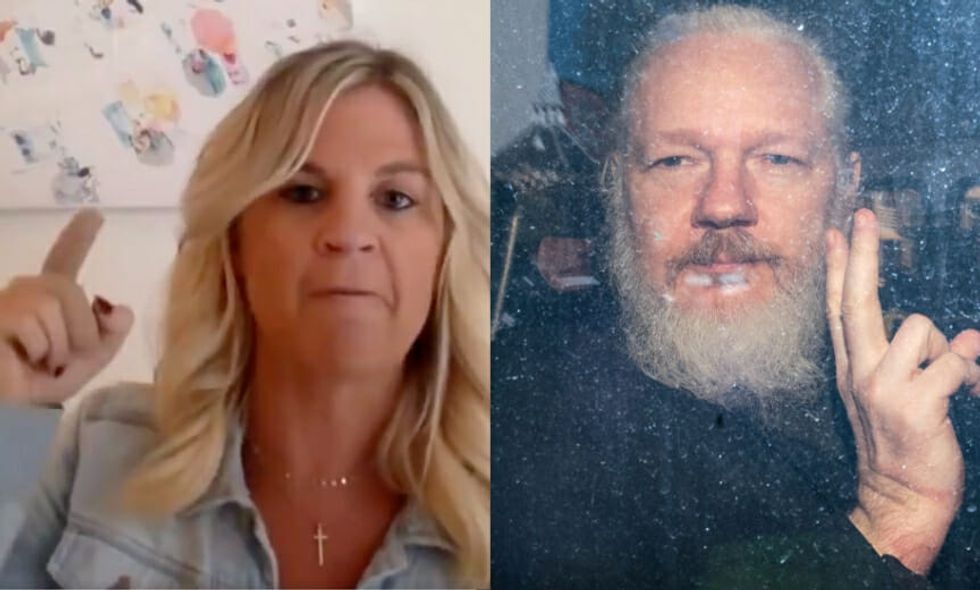 The QAnon conspiracy theory began on 4chan in October of 2017 and since then has garnered legions of delusional followers. The theory envelopes conspiracy theories on everything from birtherism to the assassination of John F. Kennedy, amounting to the idea that a deep state of sinister institutions and individuals are working against President Donald Trump and his supporters to upend the perceived threat he poses against the imaginary entities.

One of the conspiracy theories QAnon followers subscribe to is Pizzagate—the debunked idea that the government was trafficking children out of a local pizzeria in Washington, D.C. The notion is as ridiculous as it sounds, but it hasn't stopped the Pizzeria from routinely receiving threats of violence and even led one self-appointed investigator and QAnon follower to show up to the restaurant defending the imaginary children and firing shots within the eatery.

Pizzagate was borne from a stolen batch of emails from Hillary Clinton's 2016 campaign manager John Podesta, made public by WikiLeaks. The so-called incriminating emails were nothing more than pizza orders, but those who bought into the conspiracy theory were certain that pepperoni meant pedophilia.

After the recent arrest of WikiLeaks founder Julian Assange, one popular QAnon conspiracy theorist, Liz Crokin, recorded a video sharing her excitement that his arrest would lead to his exoneration, hailing his actions, which she believe exposed the imaginary pedophilia ring.

Liz Crokin is "beyond ecstatic" and on the verge of tears at the news that Julian Assange was arrested, because it… https://t.co/Ek1XvksUUq
— Right Wing Watch (@Right Wing Watch) 1555078031.0

Crokin may be celebrating, but many who came across the video were mourning an upheaval of the importance of truth.

Crokin's diatribe was widely met with dismissal and mockery.

While Pizzagate and the web of conspiracies constituting QAnon are laughable, they're still no laughing matter. Liz Crokin alone has over 30,000 Instagram followers. QAnon signs and merchandise can often be spotted at Trump's rallies. Contradictory facts aren't rebuttals, just additional conspiracies.

The country will be hard-pressed to turn back these tides of delusion.