After U.S. Intelligence Chiefs Contradicted Donald Trump in Sworn Testimony, Trump Says It's the Media's Fault, and Yeah, There's a Word For That 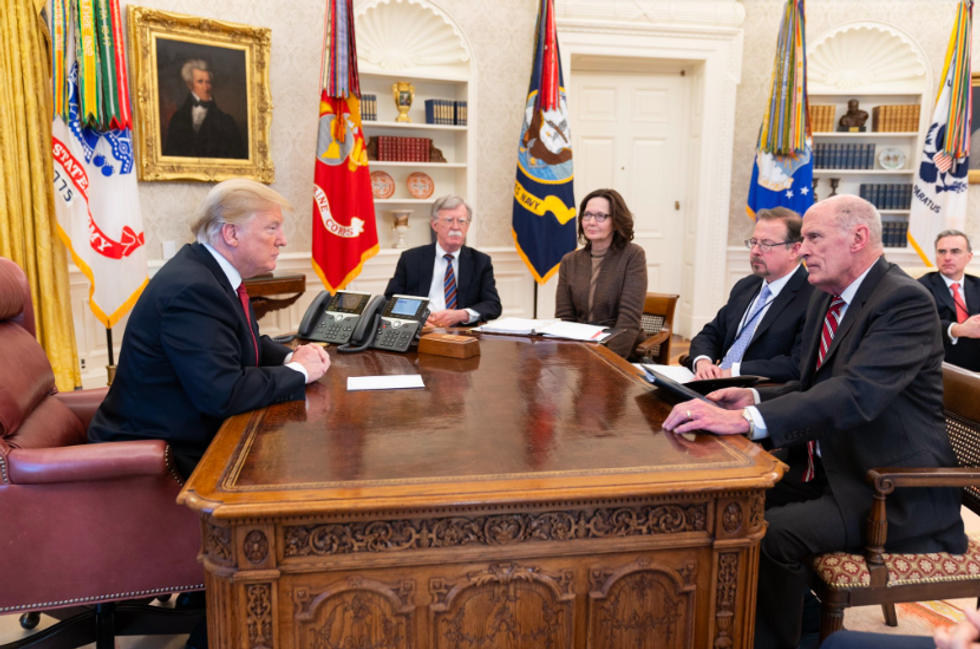 After CIA Director Gina Haspel and National Intelligence Director Dan Coats contradicted a number of President Donald Trump's foreign policy claims under oath, the President dismissed his own officials as "naive" and suggested they go back to school.

The officials contradicted Trump's claims that ISIS is largely destroyed, that North Korea is on a sure path to denuclearization, and that Iran poses an immediate nuclear threat.

Despite his public disagreements with these officials, the President is blaming the media for allegedly misrepresenting Trump's relationship with the intelligence leaders.

Just concluded a great meeting with my Intel team in the Oval Office who told me that what they said on Tuesday at… https://t.co/5TOGeWqtmX
— Donald J. Trump (@Donald J. Trump) 1548970801.0

The President claimed that the media spun the leaders' testimonies, but the questioning was broadcast live in its entirety. The disagreements are coming from the officials themselves, exacerbated by the President's dismissal of their testimony and ability.

Many are accusing the President of "gaslighting," or deceiving a subject to the point that the victim begins to doubt their own judgment and sanity.

@realDonaldTrump This is gaslighting. They were giving sworn, televised testimony in front of the United States C… https://t.co/NS77utCGmr
— Robert Maguire (@Robert Maguire) 1548971925.0

Indeed, Trump is attempting to distort reality and people are calling him out on it.As many pointed out, the testimony was aired live, in full, with no chance to be distorted.

@realDonaldTrump How does the media mischaracterize testimony in front of Congress that is live and televised? Oh,… https://t.co/5rUgmakXS3
— John Lamoureux (@John Lamoureux) 1548993644.0

Not to mention, Trump insulted the intelligence leaders only days before, doing a lot more to paint a picture of discord between them than the media did.

@realDonaldTrump That doesn’t address why he insulted them: the briefing was live streamed, he received the classif… https://t.co/KqbuDDg9lz
— Sam Vinograd (@Sam Vinograd) 1548973815.0

@realDonaldTrump Someone needs to go back to school and I am sure it is not the intel team.
— Alejandro Borda (@Alejandro Borda) 1548995968.0

@realDonaldTrump This tweet is so inane on its face but we'll play along for a minute, Biff. Since their testimony… https://t.co/UdtKla5Jri
— Tim Jackson (@Tim Jackson) 1548997563.0

Pay no attention to the man behind the curtain.