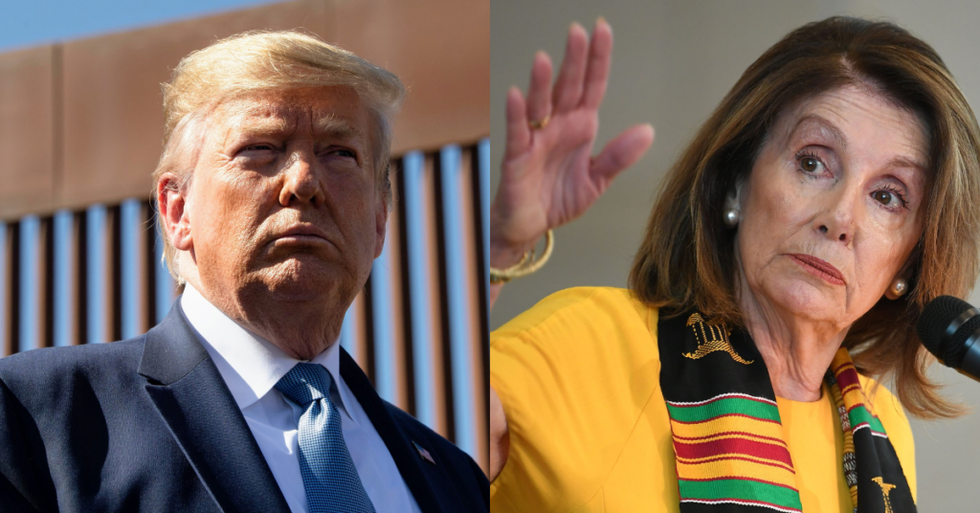 President Donald Trump spent more time over the weekend making his case for why the House of Representatives should not proceed with an impeachment inquiry. Speaker of the House Nancy Pelosi (D-CA) made the announcement September 24.

Rather than appeal to the public with constitutional law or proof of his innocence, Trump did what he usually does. Sunday night the President took to Twitter and resurrected a previously abandoned nickname for Nancy Pelosi.

"Nancy Pelosi knew of all of the many Shifty Adam Schiff lies and massive frauds perpetrated upon Congress and the American people, in the form of a fraudulent speech knowingly delivered as a ruthless con, and the illegal meetings with a highly partisan 'Whistleblower' & lawyer."

"This makes Nervous Nancy every bit as guilty as Liddle’ Adam Schiff for High Crimes and Misdemeanors, and even Treason. I guess that means that they, along with all of those that evilly 'Colluded' with them, must all be immediately Impeached!"

Nancy Pelosi knew of all of the many Shifty Adam Schiff lies and massive frauds perpetrated upon Congress and the A… https://t.co/jhoHJnCe8W
— Donald J. Trump (@Donald J. Trump) 1570415269.0

Many pointed out Pelosi is not the nervous one.

@realDonaldTrump Nervous Nancy says the guy up in the middle of the night tweeting this crap. I'm sure Nancy was sleeping just fine
— DMcKnight (@DMcKnight) 1570451978.0

@realDonaldTrump Please have one of your hired knuckleheads read you the Constitution. #Tiresome
— John Weaver (@John Weaver) 1570415376.0

@realDonaldTrump That’s not what treason is and members of Congress can’t be impeached and dear God how do you stil… https://t.co/ZHQbXRTjGq
— Kevin M. Kruse (@Kevin M. Kruse) 1570416728.0

Others focused on how absurd the latest presidential diatribe was.

Especially in the context of being a presidential diatribe.

@DavMicRot @realDonaldTrump It is dictatorial behavior pure and simple, just be glad of his incompetence, because h… https://t.co/13FMAl2pg6
— Subitus Nex (@Subitus Nex) 1570440654.0

@realDonaldTrump I think I just heard a baby rattle being thrown across the room in the White House.
— Marc Levesque (@Marc Levesque) 1570445031.0

Subpoenas were issued by the House to past and current members of the Trump administration. No final word yet on who will and who will not adhere to the requests in the House subpoenas.

The book Impeachment: A Handbook is available here to educate the public about the process and history of impeachment.