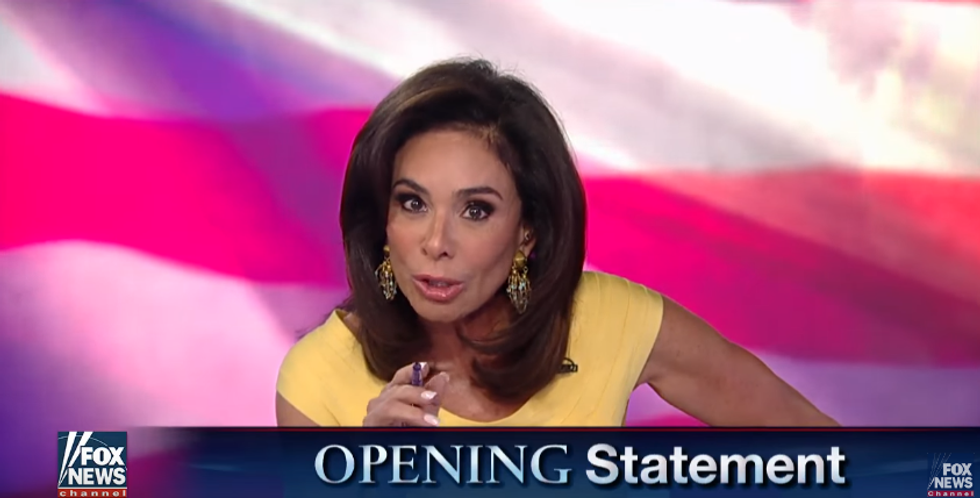 Screenshot of Jeanine Pirro on her Fox News show.

Jeanine Pirro, the host of Justice with Judge Jeanine on Fox News, called for a "cleansing" of the FBI and Department of Justice in a segment over the weekend.

“There is a cleansing needed in our FBI and our Department of Justice,” Pirro said. "It needs to be cleansed of individuals who should not just be fired but who need to be taken out in handcuffs.”

She continued: "There have been times in our history where corruption and lawlessness were so pervasive that examples had to be made. This is one of those times," she said. "I for one am tired of investigations, politicians posturing. Something more has to be done."

.@JudgeJeanine: "There have been times in our history where corruption and lawlessness were so pervasive, that exam… https://t.co/muwDtetGKD
— Fox News (@Fox News) 1512872273.0

Claiming "political hacks" have infiltrated both agencies, she singled out special counsel Robert Mueller and other officials, saying they should be arrested for their attempts to "destroy the republic."

“The stench coming out of the Justice Department and the FBI is like that of a third-world country where money and bullies and clubs decide elections,” she said. “It all started with cardinal [James] Comey destroyed our FBI with political hacks to set events in motion to destroy the republic because they did not like the man we chose to be our president.”

Pirro, a longtime supporter of President Donald Trump, also suggested “Handcuffs for Andrew McCabe, the deputy director of the FBI,” who she referred to as “the man at the hub, protecting Hillary [Clinton] and attempting to destroy Trump.”

Pirro's comments came at the end of a chaotic week which saw Trump, in yet another attempt to discredit the ongoing Russia probe, use his Twitter account to rail against former FBI director James Comey while––once again––evoking the specter of Hilary Clinton and the investigation into her use of a private email server during her tenure as Secretary of State (no charges were brought against Clinton and her team).

“After years of Comey, with the phony and dishonest Clinton investigation (and more), running the FBI, its reputation is in Tatters – worst in History!” the president tweeted. “But fear not, we will bring it back to greatness.”

Trump’s comments about the FBI promoted Comey to defend the bureau in a response on Twitter. “I want the American people to know this truth: The FBI is honest. The FBI is strong. And the FBI is, and always will be, independent,” he wrote.

The president used this past weekend to slam the "fake news" media in several different tweets, particularly over coverage of the Russia investigation.

The president also accused Washington Post reporter Dave Weigel of fabricating a news story after Weigel shared a since-deleted tweet that called into question the president's claim that a rally in Pensacola, Florida, was "packed to the rafters." Weigel shared a photograph of a half-full arena.

Weigel apologized, saying he had been confused by the image of Trump "walking in the bottom right corner." Trump also criticized Weigel after the apology and insisted The Washington Post fire him.

In a statement, The Washington Post declined to fire Weigel: “Dave Weigel relied on an inaccurate image in tweeting about President Trump’s rally in Pensacola. When others pointed out the mistake to Weigel, he quickly deleted the tweet. And when he was later addressed by the president on Twitter, he promptly apologized for it.”

This isn't the first time the president has quibbled over the size of crowds. He criticized the National Park Service (NPS), for example, after the agency retweeted a post comparing the crowd size at his inauguration to the larger crowd at former President Barack Obama’s 2009 inauguration. A report released in June by the Inspector General for the Department of the Interior concluded that NPS officials did not alter records on crowd sizes at the inauguration.