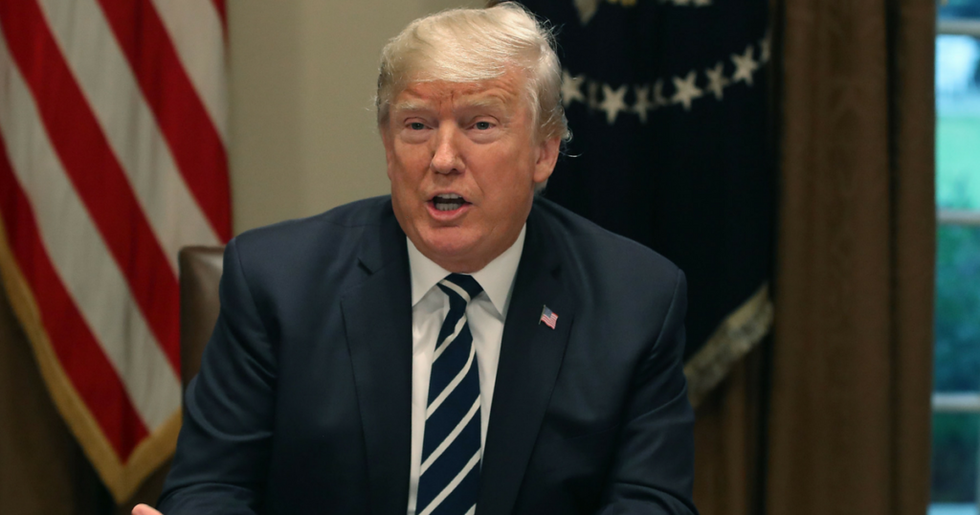 WASHINGTON, DC - JULY 17: U.S. President Donald Trump talks about his meeting with Russian President Vladimir Putin, during a meeting with House Republicans in the Cabinet Room of the White House on July 17, 2018 in Washington, DC. Following a diplomatic summit in Helsinki, Trump faced harsh criticism after a press conference with Putin where he would not say whether he believed Russia meddled with the 2016 presidential election. (Photo by Mark Wilson/Getty Images)

As the American public struggles to process why President Donald Trump came to the defense of Russian President Vladimir Putin in Helsinki, Russian state television threw cold water on his attempt to walk back his comments refuting Russia's role in attacking the 2016 presidential election.

Julia Davis of russianmediamonitor.com tweeted a translation of Russia 1's analysis of Trump's Tuesday reversal, in which the president tried to backpedal remarks he made during a press conference with Putin on Monday.

"It's very simple. First time, he said what he thought," anchor Sergey Fedorov said on Wednesday morning. "Then he got back to the Oval Office, discovered a hysterical reaction & realized he overdid it."

You can watch the Russian broadcast here.

When pressed by a reporter if he believed Russia interfered in the 2016 election, Trump said he has faith in the assessments of American intelligence agencies but "doesn't see why it would be" Russia who hacked the Democratic National Committee and stole voter registration information. Trump added that Putin was "strong and powerful" in his denial of Russian involvement.

I will say this: I don’t see any reason why it would be. I have great confidence in my intelligence people, but I will tell you that President Putin was extremely strong and powerful in his denial today.

This, of course, was three days after Special Counsel Robert Mueller filed indictments against 12 Russian military intelligence officers for their roles in breaching DNC servers and attempting to disseminate stolen voter registration data, including the DNC's voter analytics, which campaigns use for targeted ads and voter outreach.

On Tuesday, Trump attempted to walk back his remarks, which have been widely described as “treasonous,” by claiming he meant to say, “I don’t see any reason why it wouldn’t be Russia.”

"I have felt very strongly that while Russia's actions had no impact at all on the outcome of the election, let me be totally clear in saying...that I accept our American intelligence community's conclusion that Russia's meddling in the 2016 election took place," the president said.

"Could be other people also, there’s a lot of people out there," he added.

"The USA is broken," one person tweeted in response to Davis.

Going one step further, another person suggested Mueller subpoena the translator that accompanied Trump to his closed-door meeting with Putin in Helsinki on Monday. No specifics on what the two leaders discussed have been released, aside from generalizations by the president which remain unverified.

"The Russians don't believe" Trump either, one person wrote.

Trump's 180 on Tuesday was met with massive public push-back, especially after NBC News reported that the president was strong-armed by Vice President Mike Pence and Secretary of State Mike Pompeo into "clarifying" his stance.

"President Trump tried to squirm away from what he said yesterday. It’s 24 hours too late and in the wrong place," Senate Minority Leader Chuck Schumer (D-NY) said.

"I don't accept the president’s comments today," Senator Mark Warner (D-VA), co-chair of the Senate Intelligence Committee fired back at the president. "If he wanted to make those comments, he should have had the strength to make them in front of Vladimir Putin."

This has a strange resemblance to the president's comments after he was so offensive after the disturbances in Charlottesville where he equated the neo-Nazis with the protesters. So, I give these comments about 24 hours before he once again slams the investigation, before he once again sides with authoritarians like Vladimir Putin.

The president proceeded to ignore questions over whether he intends to condemn Putin, with whom he has been obsessed for years.

“Do you think Putin will be going to The Miss Universe Pageant in November in Moscow—if so, will he become my new best friend?” Trump tweeted in June 2013.

The Trump-owned Miss Universe pageant was held in Moscow that year, shortly before Trump began trying to finagle a deal to build a Trump Tower in the Russian capital.