Roseanne Barr Just Retweeted an Offensive Tweet About Valerie Jarrett, and Yep, She's At It Again 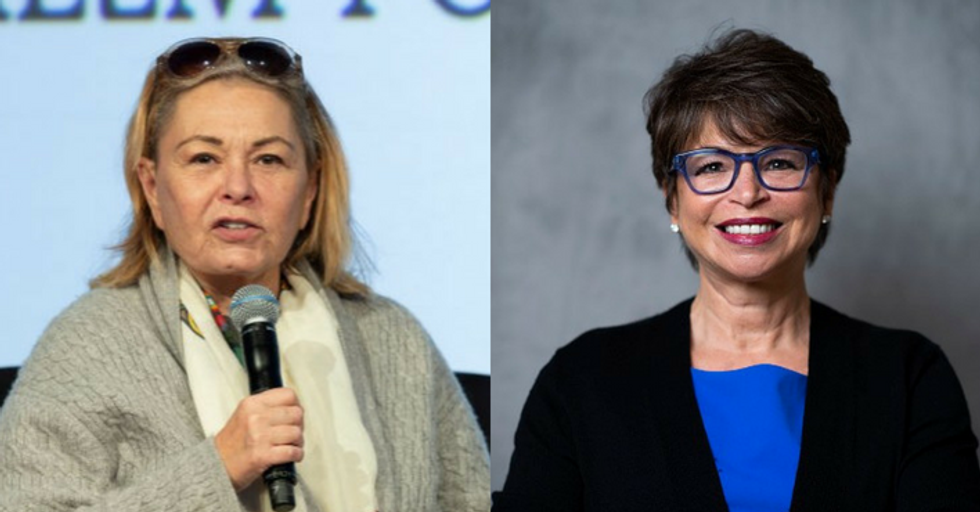 On Tuesday, embattled actress and comedian Roseanne Barr took to Twitter again to state she was "making restitution for the pain I have caused." It's unclear if Barr meant "making amends" or if she actually is making financial remuneration, the definition of restitution, to those impacted by her poor decisions.

But if she did mean financial recompense, she needs to get her checkbook out again already.

A Twitter account that identifies itself as "Ghost of Bull Moose" replied to Barr's tweet with a claim that Valerie Jarrett "wants Israelis and Jews chased into the sea, and she'll celebrate." The claim plays to the falsely held belief that because Jarrett was born in Iran, she must be Muslim.

Jarrett is the woman Barr maligned on Twitter that lead to Barr's current predicament. So of course Barr distanced herself from the comment posted on her original tweet.

Or she should have, if she was interested in "making restitution" or amends or just keeping her nose clean until things died back down.

But instead, Barr retweeted the claim against Jarrett.

But who exactly is Jarrett and why is she such a target for racists and conspiracy theorists?

Valerie Bowman Jarrett was born overseas to United States citizens working in the country prior to the revolution. Her parents were of African-American and White European descent.

At age 5, the family moved from Iran to London then to Chicago within a year. From there, Jarrett, a U.S. citizen by virtue of birth to two citizens, lived in the United States where she became a lawyer and later worked in business administration.

Being of mixed race and born in what is now a conservative Muslim country is not all that makes Jarrett a target however. She worked as an adviser to President Barack Obama, another mixed race American citizen that racists and conspiracy theorists like to compare to a monkey and claim is secretly Muslim.

Reactions to Roseanne Barr once again choosing to spread false information about Jarrett were mixed.

@BullMooseGhost @therealroseanne When people say crazy stuff like this without caring about facts, this causes pain too
— Lulu 🐝🦖 (@Lulu 🐝🦖) 1528291176.0

@BullMooseGhost @therealroseanne She's not even in the picture anymore- why are you so obsessed with VJ? 🤔
— ᴳᴿᴱᴱᴺᵀᴴᵁᴹᴮᴳᴵᴿᴸˢ (@ᴳᴿᴱᴱᴺᵀᴴᵁᴹᴮᴳᴵᴿᴸˢ) 1528301903.0

@BullMooseGhost @therealroseanne I used to love Roseanne, at least who I believed her to be. This is not true. Hat… https://t.co/vANOwjiHKT
— Unite Blue (@Unite Blue) 1528301055.0