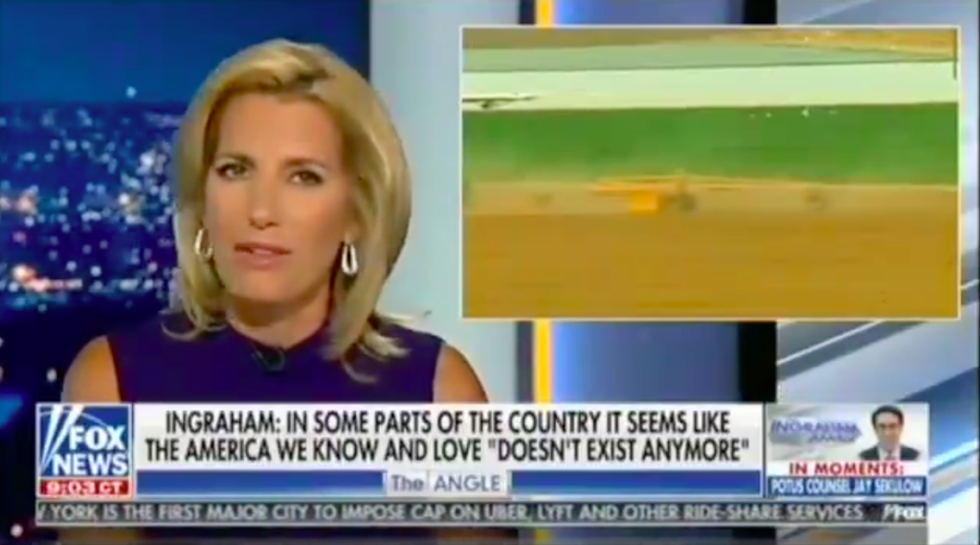 Fox News host Laura Ingraham went on a racist rant Wednesday night on her show, The Ingraham Angle, railing against "demographic changes" that "none of us ever voted for."

As video featuring people working on farms and scaling walls played in the corner of the screen, Ingraham said that the "America we know and love doesn't exist anymore."

"Massive demographic changes have been foisted on the American people," Ingraham whined, forgetting that the United States isn't only for white people. "And they are changes that none of us ever voted for, and most of us don't like."

As more video played of people pulling carrots out of the ground and scaling what could be a border wall (really?), Ingraham blamed immigration for ruining her vision of America.

From Virginia to California, we see stark examples of how radically in some ways the country has changed

According to Ingraham, even legal immigration is a big problem.

"Now all of this is related to both illegal and in some cases legal immigration," Ingraham said, "that, of course, progressives just love."

It seems Ingraham's version of America is one that is by, for, and of white people.

Ingraham later in the same show: Is black on black crime a bigger problem than the racism that you claim exists in… https://t.co/xfJXl34yYB
— Andrew Lawrence (@Andrew Lawrence) 1533784270.0

Twitter scolded Ingraham for her white supremacist comments, which some said tread dangerously close to Naziism.

@ndrew_lawrence when you build an immunity to regular racism and need that pure nazi shit
— raandy (@raandy) 1533785654.0

Normally, calling someone a Nazi for mere racism would be a stretch. Except...

The "14 words" refers to the most popular slogan in the white supremacist movement: "We must secure the existence of our people and a future for white children."

"Fox News isn't even trying to hide it anymore." But "both sides" something or other.

Speaking of demographic changes no one asked for...

Ingraham's hypocrisy regarding her own family did not go unnoticed either.

Ingraham has three adopted children: a daughter from Guatemala and two sons from Russia. Yet she's somehow against legal immigration now?

Others want to know what Ingraham has against them personally.

Is this the America Ingraham wants?

That pretty much sums it up.