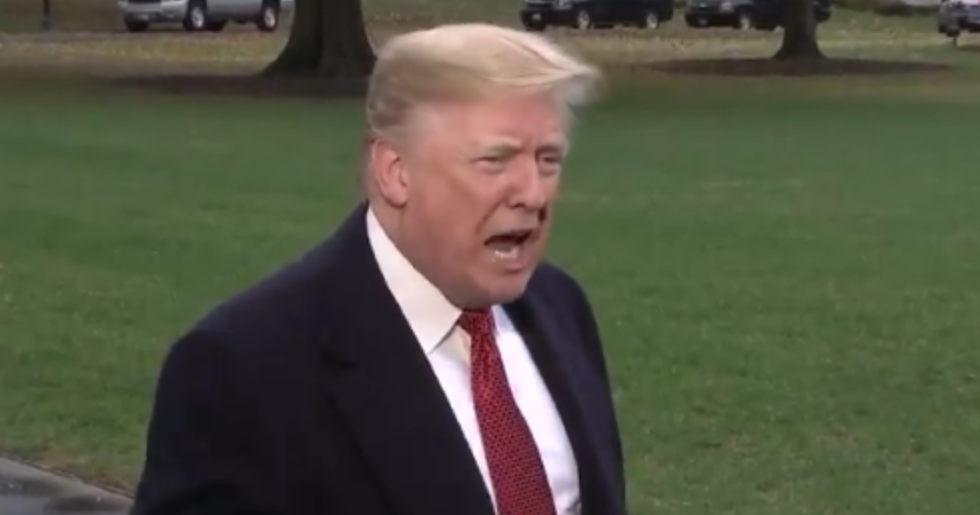 President Donald Trump on Friday jabbed at former First Lady Michelle Obama over her soon-to-be-released memoir in which Mrs. Obama writes she will "never forgive" Trump for his part in the racist "birther" conspiracy theory that targeted her husband.

In her memoir, Becoming, Mrs. Obama savaged Trump for fueling false rumors that the 44th president was not born an American citizen.

"The whole [birther] thing was crazy and mean-spirited, of course, its underlying bigotry and xenophobia hardly concealed. But it was also dangerous, deliberately meant to stir up the wingnuts and kooks, Mirs. Obama writes in her book. "What if someone with an unstable mind loaded a gun and drove to Washington? What if that person went looking for our girls? Donald Trump, with his loud and reckless innuendos, was putting my family’s safety at risk. And for this I’d never forgive him.”

Mrs. Obama knocks Trump's entire presidential bid as a form of "grandstanding," adding that Trump's brand can be summed up as "I can hurt you and get away with it.”

The president went into a tirade against the Obamas Friday morning.

"She got paid a lot of money to write a book and they always expect a little controversy," Trump said of Mrs. Obama.

Trump did not specify what the "many other ways" are.

Watch the president's remarks below:

Responding to Michelle Obama memoir, in which she writes that she'll "never forgive" Donald Trump for his birther c… https://t.co/Q2ihbr8Zaq
— tomorraw.com (@tomorraw.com) 1541785340.0

Trump was blasted, for the comment, as some reminded him of Obama's actual military accomplishments:

Trump slamming Obama for depleting the military? Yet many Trump supporters always say "why does the US have to get… https://t.co/G3CYBLgHhf
— Ryan (@Ryan) 1541789606.0

Not to mention Trump's own hypocrisy on the issue.

We are spending more now on our military than ever before, a trend that has transcended presidencies.

His bitter narcissism is showing, as is his grudge against Obama.

Let's not forget which party was in charge for most of Obama's presidency - Trump's GOP.

Others are simply sick of Trump's non-stop whining. And his unpresidential behavior.

Trump is flat out lying about Obama, but no one is surprised.

@JamilSmith @maggieNYT Mrs. Obama is a beautiful woman with such grace and strength. I believe she will continue to… https://t.co/g2SWUw4qkU
— Flabbergasted (@Flabbergasted) 1541781933.0