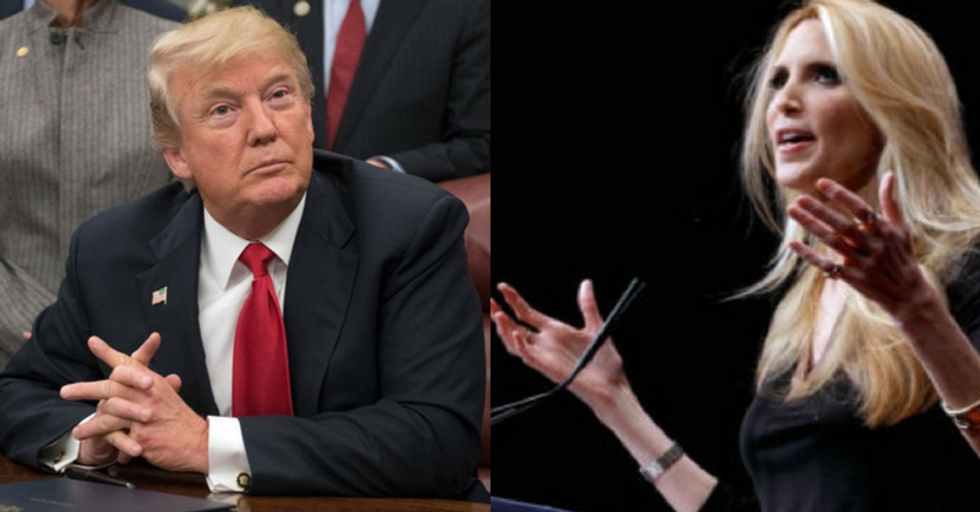 To avoid situations like the one the Trump administration now finds themself in with fired White House staffer Omarosa Manigault-Newman, Coulter advises:

How about hiring smart people?"

When host Steve Robinson asked Coulter "what the Hell [Omarosa]" was doing at the White House in the first place, Coulter maintained the former contestant on The Apprentice and self-described reality TV actress is one of many bad hiring decisions made by the President.

Other bad hiring decisions according to the conservative pundit and author? Those include first daughter Ivanka Trump and son-in-law Jared Kushner.

"On one hand, he could hire people who are smart, know a lot about politics and supported his agenda, but who he's only known since he adopted that agenda when he first ran for president," Coulter responded. "Or, he could hire people with no experience in politics because he's known them a long time, because you know, then at least he's going to get loyalty."

But because he chooses the latter instead of the former, Coulter maintains Trump creates his own scandals and problems.

"How about hiring smart people trying to help you?" Coulter suggested before making certain to state she was not volunteering.

"I'm not bidding for a job, I don't want a job," the currently technically unemployed Coulter stated. While she maintains her website and writes a column carried by a few conservative publications, Coulter no longer enjoys the full-time radio or television jobs she once had.

As someone who now gains most of her media attention by being a vocal critic of Trump, she would hardly qualify as "trying to help" him anyway.

You name all the people who would have been so great in this White House and we would have a wall by now," Coulter added referring again to a frequent target of her Trump criticisms—the campaign promised wall that Mexico would pay for.

But no, it has to be people from The Apprentice and his kids."

Others expressed the same view of how Trump finds himself the center of repeated scandals and investigations since taking office.

In an opinion piece for Business Insider, senior editor Josh Barro made similar points except he added that Trump knew exactly what he was getting when he handed Omarosa a position at the White House with an over $179,000 annual salary.

Barro began by pointing out how Trump talks and tweets about his decisions that backfire.

"When Trump's hires don't work out the way he'd hoped, he has a way of complaining about them as though they were something that just happened to him. Jeff Sessions. Rod Rosenstein. 'Sloppy Steve' Bannon."

He's outraged, he's surrounded by morons and disloyal losers, none of this is his fault, even though he hired these people."

"This is bizarre in general," Barro stated. "But it's hilariously bizarre in the case of Omarosa Manigault Newman, whom he called a "lowlife" to reporters on Saturday (and again on Twitter on Monday)."

Barro stated not only did Trump know Omarosa for over a decade, he bears responsibility for her fame.

Donald Trump created Omarosa. He made her the supervillain she is today. He is the person who fired her three times on national television."

"Sure, she's a lowlife," Barro conceded. "You can't trust her. I'll stipulate to that. So why the hell did Donald Trump hire her to work in the White House?"

Barro then offers his own reason for Omarosa being brought back by Trump over and over again despite knowing exactly what he would get each time.

Trump's own tweets give one reason he hired and retained Omarosa in her job at the White House Office of Public Liaison: She flattered him."

And the President more or less concurred with that assessment when he posted about Omarosa on Twitter back in 2013.

Whether the latest scandal exposes a president who makes hiring decisions based on familiarity and perceived loyalty or how much the applicant strokes his ego, none should trump being qualified for the job.