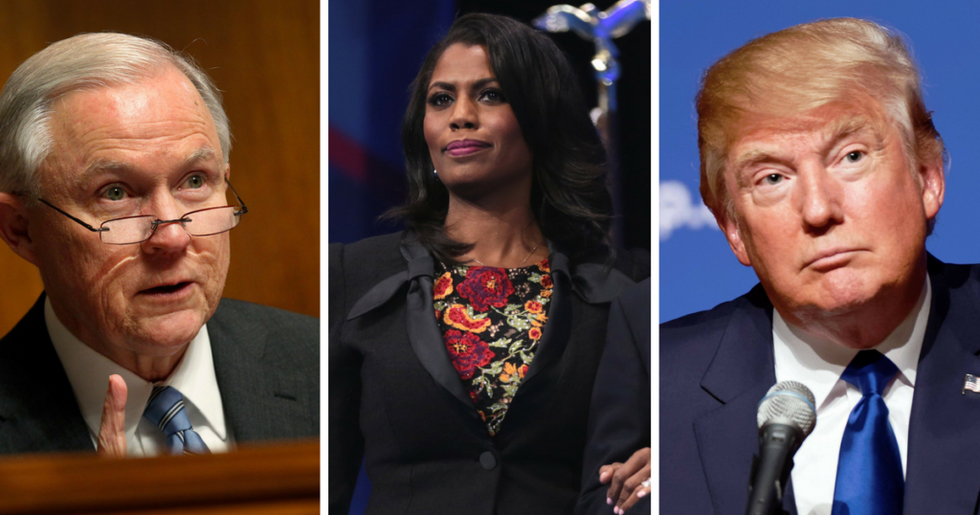 President Donald Trump is furious at his former friend and White House employee Omarosa Manigault Newman and has asked Attorney General Jeff Sessions to have her arrested, according to a Republican with knowledge of the conversations who spoke to Vanity Fair. It's unclear what laws the president believes she broke.

The report notes that another Republican "recounted how over the weekend Trump derailed a midterm-election strategy session to rant about Manigault Newman’s betrayal."

“He’s known her for 15 years and thinks it’s a personal betrayal,” a former West Wing official said. Added another official: She is doing everything perfect if her ultimate goal is to troll Trump,” while another source said Trump has been particularly angry about Manigault Newman's book, Unhinged: An Insider's Account of the Trump White House, because "he instinctively trusts women more than men."

The Trump campaign filed for arbitration earlier this week; the campaign is seeking "millions" in damages. Manigault Newman, meanwhile, has criticized the president for attempting to intimidate and silence her.

In their arbitration action, the Trump campaign alleges that Manigault Newman, a former reality show contestant on Trump’s The Apprentice whose formerly close relationship with the president landed her a position as the Director of Communications for the Office of Public Liaison. At least one campaign aide claimed that Manigault Newman’s book and subsequent tour breached her 2016 confidentiality agreement with the campaign.

Manigault Newman has acknowledged signing a confidentiality agreement in 2016, and writes in her book that following her termination from the White House in December 2017, the Trump re-election effort offered her a $15,000 per month position on the condition she sign a new confidentiality agreement. Manigault Newman says she declined that offer and yesterday she released exclusively to MSNBC a secret tape of campaign official Lara Trump offering her the position, appearing to corroborate the claims she makes in her book.

In one excerpt from the recording––NBC has heard the recording in full and has confirmed that the clips of this conversation are in context–– Lara Trump, who is married to Donald Trump’s son Eric, tells Manigault Newman that “the only thing that we have to consider, where we’re talking salary as far as the campaign is concerned, is that, as you know, everything is public,” adding:

And that all the money that we raise and that pays salaries is directly from donors, small-dollar donors for the most part. So, I know you, you were making 179 at the White House. And I think we can work something out where we keep you right along those lines. Specifically, let me see, I haven’t even added up the numbers. But we were talking about, like, 15K a month. Let me see what that adds up to. Times 12. Yeah.

LISTEN: Omarosa's secret recording of a call she had with Lara Trump in which they discuss Omarosa's potential sala… https://t.co/k8v5udkCw1
— Aaron Rupar (@Aaron Rupar) 1534439268.0

Manigault Newman made headlines earlier this week after she revealed she'd secretly recorded John Kelly, the White House chief of staff, as he fired her in the Situation Room. On the recording, Kelly says Manigault Newman could be facing “pretty significant legal issues” for her misuse of a government issued car. (Manigault Newman denies she misused the vehicle.)

“But I think it’s important to understand,” he adds, “that if we make this a friendly departure, we can all be, you know, you can look at, look at your time here in, in the White House as a year of service to the nation. And then you can go on without any type of difficulty in the future relative to your reputation.”

Manigault Newman's claim that Trump used racial slurs––particularly the "n-word"––during a 2012 taping of The Apprentice has also stirred controversy, and White House Press Secretary Sarah Huckabee Sanders came under fire after she could not guarantee that there don't exist any recordings of the president using such language. Manigault Newman alleges her search for the tape got her fired from the White House.

The New York Times reports that “Mr. Trump’s aides have been concerned that they will make appearances on other tapes, of which Ms. Manigault Newman is believed to have as many as 200.”

Some of the president's major donors have expressed concerns that the Trump campaign may have been used as a "slush fund" to pay employees who've been fired or are otherwise "troublesome" for the campaign.

“It’s diverting donor money that could be used to wage the midterm election battle or store resources for Trump’s re-election,” said Dan Eberhart, an Arizona donor who serves as an adviser to the America First Policies group. “Instead, it’s an elongated hush payment.” Eberhart added, however, that donors "still want to win elections."