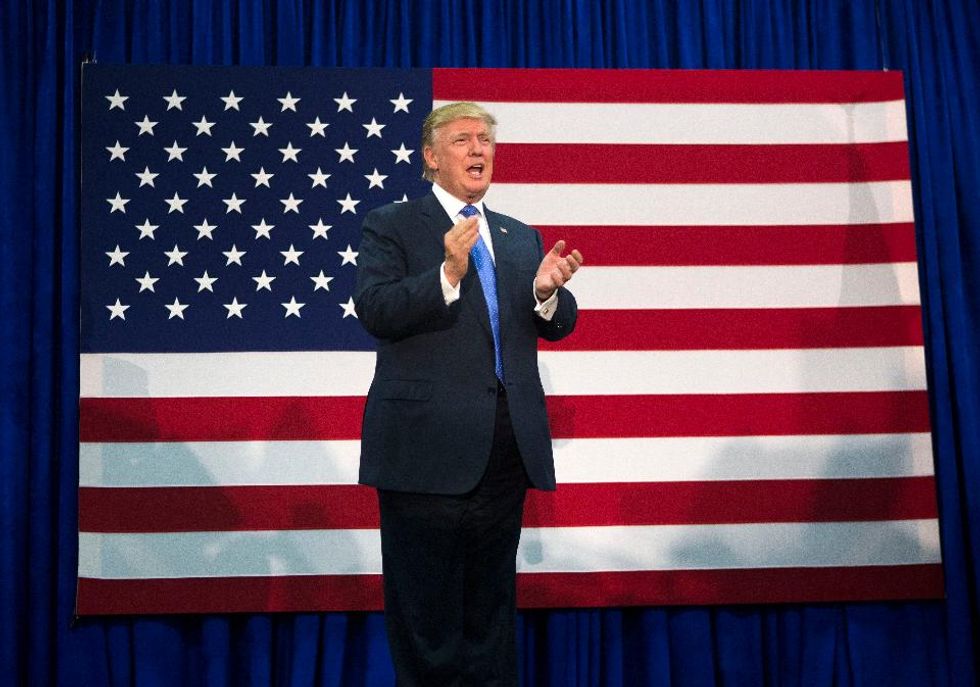 The CIA concluded in a secret assessment presented to lawmakers that Russia intentionally interfered in the 2016 presidential election––specifically to help Donald Trump win. In previous assessments, the CIA characterized Russia's motivations as an attempt to undermine the electoral process. But those assessments always stopped short of saying that Moscow's goal was to help elect Trump.

According to officials briefed on the matter who spoke to The Washington Post, intelligence agencies have identified individuals with connections to the Russian government who provided WikiLeaks with thousands of emails from the Democratic National Committee and others, including those of John Podesta, Hillary Clinton's campaign chairman. U.S. officials described these individuals as "actors" known to the intelligence community who are part of a larger Russian espionage operation targeting the presidential race.

“It is the assessment of the intelligence community that Russia's goal here was to favor one candidate over the other, to help Trump get elected," said a senior U.S. official briefed on an intelligence presentation made to U.S. senators. “That's the consensus view."

Officials within the administration presented their evidence to key senators in a secure room in the Capitol used for briefings involving classified information. They laid out evidence collected by U.S. spy agencies showing Russia's role in cyber-intrusions in at least two states and in hacking the Democratic organizations and individuals. Officials who spoke with reporters on condition of anonymity revealed that agency briefers told the senators that it was now “quite clear" that electing Trump was Russia's goal. These briefers also urged the senators to join a united bipartisan front to combat, as one official described, “the threat posed by unprecedented meddling by a foreign power in our election process."

The Democrats in attendance unanimously agreed on the need to take the threat seriously. At least two Republican lawmakers, however, were reluctant. Several officials have confirmed that one of these was Kentucky Senator Mitch McConnell, whose wife, Elaine Chao, was recently nominated by the president-elect for Transportation Secretary. They told reporters that the adamant McConnell said he would consider any attempt by the Obama administration to challenge the Russians publicly a partisan act. Other Republicans who attended the briefing expressed concerns about going public with the allegations in the final stages of an election, arguing that they would only strike a blow to already shaken public confidence and give Moscow the upper hand.

The president-elect's transition team issued a terse response to the CIA's allegations, and their statement sparked concerns within the intelligence community that Trump risks a rift with the same community on which he will rely for assessments of the greatest threats facing the nation.

"These are the same people that said Saddam Hussein had weapons of mass destruction," they said. "The election ended a long time ago in one of the biggest Electoral College victories in history. It's now time to move on and 'Make America Great Again.'"

Trump has continuously dismissed the assessment from U.S. intelligence that it was confident that Russia was behind the hacks, a belief he expounded upon in an interview with TIME, in which he suggested that the conclusion of Russian interference was politically motivated:

I don't believe they interfered. That became a laughing point, not a talking point, a laughing point. Any time I do something, they say 'oh, Russia interfered.'Why not get along with Russia? And they can help us fight ISIS, which is both costly in lives and costly in money. And they're effective and smart.
It could be Russia. And it could be China. And it could be some guy in his home in New Jersey.
I believe that it could have been Russia and it could have been any one of many other people. Sources or even individuals.

Trump's statements continued to raise questions about Trump's Russian ties and continued affinity for Moscow despite the concerns of 17 intelligence agencies that Russian interference has heightened geopolitical tensions.

According to Politifact, the Pulitzer Prize-winning fact-checking service:

The president-elect's comments received sharp rebukes from both sides of the aisle, amid concerns that he would block inquiries from proceeding. Earlier this week, Democratic Reps. Eric Swalwell (D-California) and Elijah Cummings (D-Maryland) proposed the “Protecting Our Democracy Act," legislation to create a 12-member bipartisan, independent commission to investigate Russian meddling. The commission would operate with an initial budget of $3 million, have members from both parties and chambers of Congress, and would draw upon outside experts in computer security, elections law, and foreign policy. The commission would have the power to interview witnesses, issue subpoenas, obtain documents, and hear public testimony.

The news of the CIA's bombshell assessment comes on the heels of the White House's announcement that President Barack Obama had ordered a “full review" of Russian hacking during the election campaign. Obama wants the complete report before he leaves office on January 20. James Clapper, the Director of National Intelligence, will lead the review.

“We may have crossed into a new threshold, and it is incumbent upon us to take stock of that, to review, to conduct some after-action, to understand what has happened and to impart some lessons learned," Obama's counterterrorism and homeland security adviser, Lisa Monaco, told reporters at a breakfast hosted by the Christian Science Monitor. She did not address the latest CIA assessment, which hasn't been previously disclosed.

Last week, seven Democratic senators, including Sens. Ron Wyden (Oregon) and Mark R. Warner (Virginia) asked President Obama to declassify details about the interference and why officials believe the Kremlin orchestrated the operation. Officials confirmed Friday that the senators were specifically requesting that the White House release portions of the CIA's presentation.

This week, top Democratic lawmakers in the House also requested briefings from Obama on Russian interference.

We are deeply concerned by Russian efforts to undermine, interfere with, and even influence the outcome of our recent election. This Russian malfeasance is not confined to us, but extends to our allies, our alliances and to democratic institutions around the world... To evaluate Congress's response appropriately, we would like all Members to have a comprehensive understanding of what the U.S. Intelligence Community knows regarding Russia's involvement in these actions and attempts to interfere in our election. Specifically, we are requesting a classified briefing that will provide details regarding Russian entities' hacking of American political organizations; hacking and strategic release of emails from campaign officials; the WikiLeaks disclosures; fake news stories produced and distributed with the intent to mislead American voters; and any other Russian or Russian-related interference or involvement in our recent election.

The CIA presentation does fall short of a formal assessment produced by all 17 intelligence agencies. According to a senior U.S. official, intelligence officials voiced minor disagreements about the agency's assessment. Some questions, they say, remain unanswered. None of the intelligence agencies have specific intelligence showing the Kremlin "directing" the individuals identified in the CIA's assessment to pass the Democratic emails to Wikileaks. These actors, according to one official, were "one step" removed from the Russian government; they are not government employees. In fact, Moscow has in the past employed middlemen to execute sensitive intelligence operations so it can retain plausible deniability. Wikileaks founder Julian Assange claimed in a television interview that the “Russian government is not the source."

But the CIA also based their conclusion on another finding: That the Russians also hacked the Republican National Committee's computer systems, yet did not release whatever information they obtained from their networks. But the GOP has an explanation. Officials within the Republican party have stressed over the last few months that their networks were not compromised and that only the accounts of individual party members were attacked.

“We now have high confidence that they [the Russians] hacked the D.N.C. and the R.N.C., and conspicuously released no documents" from the Republican organization, one senior administration official said.

It is still unclear how many files were stolen from the RNC, but the intelligence community's assessment that the RNC's complete network was hacked contrary to what those close to the scandal have insisted continues to raise questions about the Kremlin's evolving––and ultimate––objectives.