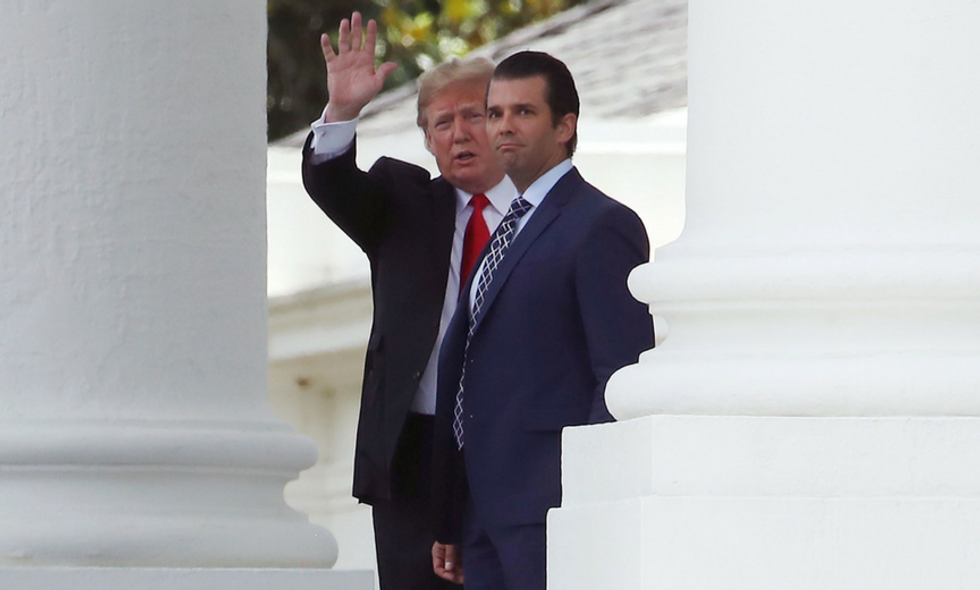 WASHINGTON, DC - JULY 05: U.S. President Donald Trump and his son Donald Trump Jr. walk out onto the North Portico of the White House while departing on a trip to Wyoming to attend a Make America Great rally, on July 5, 2018 in Washington, DC. (Photo by Mark Wilson/Getty Images)

An early-morning tweet from President Donald Trump on Sunday is contradicting a statement he dictated on behalf of his son, Donald Trump Jr., last year regarding the infamous Trump Tower meeting between high-ranking members of the Trump campaign and Russian government liaisons.

A statement dictated by the President but released in Donald Trump Jr.'s name insisted that the topic discussed between Don Jr., Russian lawyer Natalia Veselnitskaya, Trump campaign advisor Jared Kushner and others was primarily Russian adoption.

Fake News reporting, a complete fabrication, that I am concerned about the meeting my wonderful son, Donald, had in… https://t.co/sTbiVC2g4a
— Donald J. Trump (@Donald J. Trump) 1533472543.0

This tweet does line up more closely with uncovered email correspondence between Trump Jr. and Russian intermediaries. When promised dirt on Hillary Clinton from the Russian team, Trump Jr. responded: "If it's what you say I love it especially later in the summer."

The president's tweet is the most forthright statement yet on the motivations of the meeting, which is being scrutinized by Special Counsel Robert Mueller and his team as evidence of possible collusion between Russia and the Trump campaign.

The Russians offered damaging info on your opponent. Your campaign accepted. And the Russians delivered. You then… https://t.co/jMcM63unFJ
— Adam Schiff (@Adam Schiff) 1533484586.0

KEY QUESTION: If there was no underlying wrongdoing why did Trump lie TO HIS OWN LAWYER about his role in covering… https://t.co/HaTQGZyXpz
— Judd Legum (@Judd Legum) 1533500857.0

Trump fails to understand that the very meeting he is acknowledging is collusion — or conspiracy, if you will — to… https://t.co/GkiSwzCKpx
— Jennifer Rubin (@Jennifer Rubin) 1533505504.0

The "totally legal" aspect of the tweet falls in lockstep with the latest spin in an ever-changing narrative put forth by the Trump administration.

While "no collusion" has been repeated incessantly by Trump officials and the president himself, it's only recently that the president's legal team has begun expressing skepticism as to whether or not collusion is, in fact, a crime.

The president first made the claim last year in an interview with the New York Times, saying, "there is no collusion, and even if there was, it's not a crime."

they're not going to be colluding with Russia, which I don't even know if that's a crime, colluding about Russians. You start analyzing the crime -- the hacking is the crime...The President didn't hack.

The president echoed the sentiments in a tweet soon after:

Collusion is not a crime, but that doesn’t matter because there was No Collusion (except by Crooked Hillary and the Democrats)!
— Donald J. Trump (@Donald J. Trump) 1533038338.0

The argument, according to legal experts, appears to be purely semantic.

While the word "collusion" is not specifically used in federal campaign finance laws, Title 52, Section 30121 states in part:

It shall be unlawful for—

(1) a foreign national, directly or indirectly, to make—

Senator Chris Coons (D-DE) recently pointed this out to Trump's legal team in a pointed video via Twitter.

Folks on Twitter broke it down for the president:

@JacobAWohl Aaaaand there it is. From no meetings to no collusion to collusion’s not a crime to collusion is awesom… https://t.co/KpLn4OYNSF
— Lena (@Lena) 1533560361.0

As the president increases efforts to discredit Special Counsel Mueller's investigation and as more revelations unfold, it's likely the tempestuous narratives will continue to shift. Eventually, enough spinning is bound to make anyone dizzy.