Meet The Real Russian Spies Who Inspired FX's "The Americans" 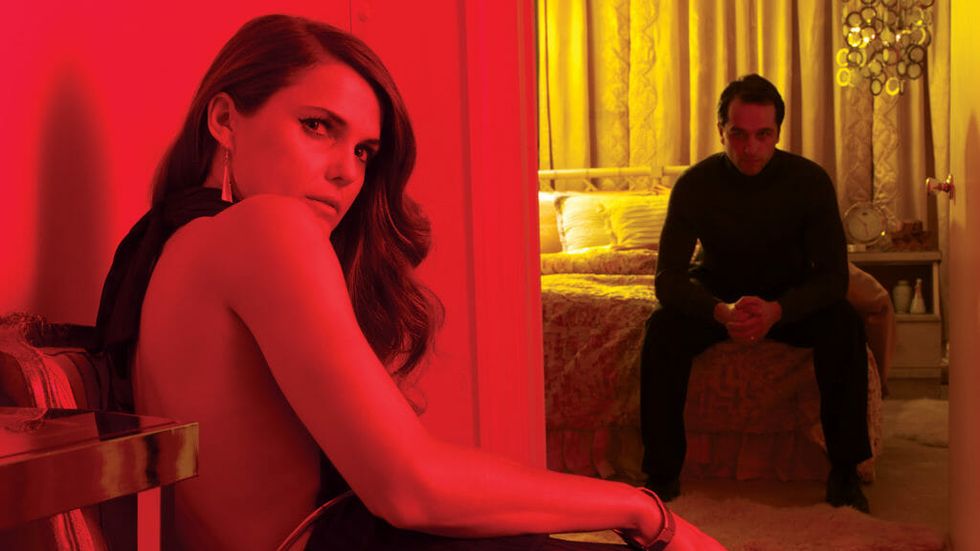 What would you do if you learned that your two friends, Richard and Cynthia, were actually Vladimir and Lydia?

If this sounds straight out of a Cold War propaganda film (or an FX-original drama), ask the residents of suburban Montclair, New Jersey, about the FBI raid that occurred back in 2010 at 31 Marquette Road. As it turns out, the bread-and-butter, all-American family down the street were actually Russian spies.

The two-story, beige, colonial home seemed all-American from the outside. The residents were named Richard and Cynthia Murphy, and they lived with their two daughters: Kate, who was 11 years old, and Lisa, who was 9 at the time.

Richard stayed home with the girls while Cynthia worked as a financial planner at an accounting firm in New York City.

Of course, this was all part of an elaborate masquerade.

The true intention of Richard and Cynthia — who were actually Vladimir and Lydia Guryev — was information reconnaissance for Russia’s SVR, which is essentially the modern-day KGB.

"Richard" and "Cynthia" Murphy, with their children. (Credit: Source.)

For context, the KGB was the national security agency of the Soviet Union during the Cold War. The organization operated a secret police force domestically but also employed international spies. The SVR, as the successor of the First Chief Directorate of the KGB, shares similarities with the infamous agency.

The Guryevs’ clandestine intentions were long concealed from their neighbors, however, until the FBI raided the seemingly inconspicuous home on June 27, 2010.

Much to the neighborhood’s shock and confusion, the identities of Richard and Cynthia were then revealed.

How Did They Manage This?

Apparently, the Guryev family were active spies for quite some time, working for the SVR since the 1990s. Their mission was to learn about nuclear weapons, American policy toward Iran, CIA leadership, the governmental institutions of the U.S. and other varied subjects.

But the Guryevs were not the only Russian spies arrested on that fateful day in 2010. The FBI took in eight other alleged SVR spies in various East Coast locations: Manhattan, Yonkers, Boston, and northern Virginia. One person was also apprehended and arrested in Cyprus, but this was all done in one fell swoop.

The “spy house,” as neighbors termed it, in Montclair was for some time a near-perfect place to hide without either detaching from society or raising suspicions.

With Manhattan a mere 30-minute ride away, and a nature preserve surrounding the back perimeter of the property, there was easy access to information, other agents and travel — but without the fear of discovery.

In addition, these spies endured years of training for their posts abroad, either by the SVR or KGB, depending on when they took the job. Directorate S, the most classified part of the KGB, trained one such spy in the late-1970s for two years in Moscow. Included in these lessons were daily English classes, communicating in code and surveillance. It was all done one-to-one, and no other spies were acquainted with one another during these years.

Naturally, the news of Russian spies made national headlines, regenerating for some a bygone sense of Cold War nostalgia.

These events even prompted the creation of the television series “The Americans,” a Cold War-era spy drama on FX.

The real “Murphys” were significantly less imprudent and precipitous than the Russian spies on the popular show, behaving much more cautiously.

According to neighbor Virginia Bailey, in an interview with CNN, “By all accounts these neighbors were neither reckless nor wild.”

Neighbor Elizabeth Lapin, a poetry professor who still lives down the street from the house, recounted to CNN, “You could have told me they were Martians from space and I would have been less surprised.”

According to others, the spy couple even attended local block parties. They were not overly social, but by no means were they reclusive. One summer, the girls opened a roadside lemonade stand.

Lapin also remarked on this: “The girls built a lemonade stand one summer. That was such an American thing.”

Also, like Lapin, some neighbors were not even sure they heard the couple speaking English with any trace of an accent.

Before the raid, neighbors Virginia Bailey and her daughter, Jessie Gugig, recall “Cynthia” taking her dog for morning walks. They never spoke to “Mrs. Murphy,” but Bailey described her appearance as “very attractive and very well put together. She always dressed very nicely.”

How Were They Found?

The Guryevs and others were discovered by both the FBI and CIA, as word of SVR spies in the United States made the rounds to these intelligence agencies in the early 2000s.

This batch of Russian spies had been surveilled for years. The Guryevs’s house was bugged and even searched in their absence. In an effort to keep up appearances, the family avoided speaking Russian in their own home, using English as a default. The children only knew English.

With no diplomatic protection, the Guryevs were considered illegal. When a fellow spy defected to the U.S. and intelligence cracked a secret code the spies were using to communicate with Moscow, the FBI finally got their evidence.

Finally, when Vladimir Guryev was spotted in 2009 with a Russian government official on video surveillance, the plan for the couple’s arrest moved forward.

Neighbor Gugig, who was only 15 at the time, described the FBI raid and search from memory, years later: “Eventually another car pulled up and guys in suits with earpieces showed up with some papers that must have been a warrant. … The house got lit up like it was Christmas.”

Prior to the arrest, Lapin explained that she saw a police car parked in front of her house. She was not certain why it was there, besides a “premonition” that “something strange” was happening.

Following the dramatic event at 31 Marquette Road, the press maintained a presence in the area for a week or more.

Two weeks following the event, Washington and Moscow agreed to an exchange: because all ten of the arrested spies pleaded guilty to Russian espionage, the U.S. placed them in their government’s custody in a trade for four individuals who were “incarcerated in Russia for alleged contact with Western intelligence agencies,” according to the Justice Department.

This infamous 2010 network of Russian sleeper agents has a Justice Department-sanctioned name based on the Russian nickname for people of this occupation (i.e., illegals). They are called the Illegals Program.

Are The Kids All Right?

Though Kate and Lisa were born in the U.S., they followed their parents back to Russia, after staying for some time with a family friend. Former U.S. Attorney General Eric Holder described this process as “repatriation,” though the girls were never Russian citizens.

It is unusual for spies to have children, since loyalties are divided between duty to the job and family, according to former FBI operative Eric O’Neill.

“When you’re a parent, you’re supposed to take care of your kids. You are supposed to put them first in your life. And a spy can’t do that,” O'Neill explained.

Who Lives in the “Spy House” Now?

Common to its mid-century decennary, the suburban home is two-story and beige, just over 1,800 square feet and valued at $425,700 this year, according to Essex County tax records.

Neighbors associate the house with sour memories following the raid, but those who have not moved explain that the neighborhood is beginning to regain its old feeling. New neighbors obviously do not connect the house with the 2010 event, or the spy family.

“It’s hard to believe it happened,” according to Bailey.

“Nature is kind of taking the house back. … Ivy is starting to eat into the house. The garden is completely overgrown,” Gugig told CNN, adding, “The house just sits there and it's empty. … It's just a constant reminder.”

Lapin looked through the window following the arrest, noticing Lisa’s textbook on Chinese grammar, stacks of coins and a copy of a 1953 post-World War II memoir, “Woman in Berlin,” on a visible table. Near the piano was a “beautiful painting” of a young female, which Lapin assumes was Kate’s self-portrait.

Recently, the house was purchased and there are plans for renovation, so a new era begins for Montclair’s Marquette Road.

Are There Still Russian Spies Living In The U.S.?

A Russian spy ring dedicated to recruiting the children of spies was one of the Illegals Program’s intentions. Though it was unsuccessful regarding the ten spies discovered in the U.S. during 2010, there were additional efforts to recruit university students and otherwise influence public opinion in favor of Russia.

Other families were involved in the 2010 FBI and CIA raids, like the Foley boys, who are children to Russian spies Donald Heathfield and Tracey Foley. These boys, who are now young men, are currently attempting to gain Canadian citizenship, since they were born in Canada prior to moving to the U.S. Unfortunately, they are facing harsh and difficult challenges due to their parents’ actions.

Just this year, current and former U.S. intelligence officials have told CNN that Russian spies are increasing their efforts at acquiring intelligence within the United States. Furthermore, in 2016, multiple Russian diplomats once tracked by the Department of State went missing.

Former Soviet KGB spymaster Oleg Kalugin told CNN he “would not be surprised” to learn that Russia was still involved in similar international spy programs, though he acknowledged these as inefficient and wasteful. He added that they are likely less active than back in 2010.

Of course, the Russian meddling in the 2016 U.S. presidential election and collusion with members of Donald Trump’s presidential campaign do not relieve any suspicions.

Though it may sound reminiscent of the Cold War, the answer to the above question is likely yes — or, at the very least, the possibility is real.