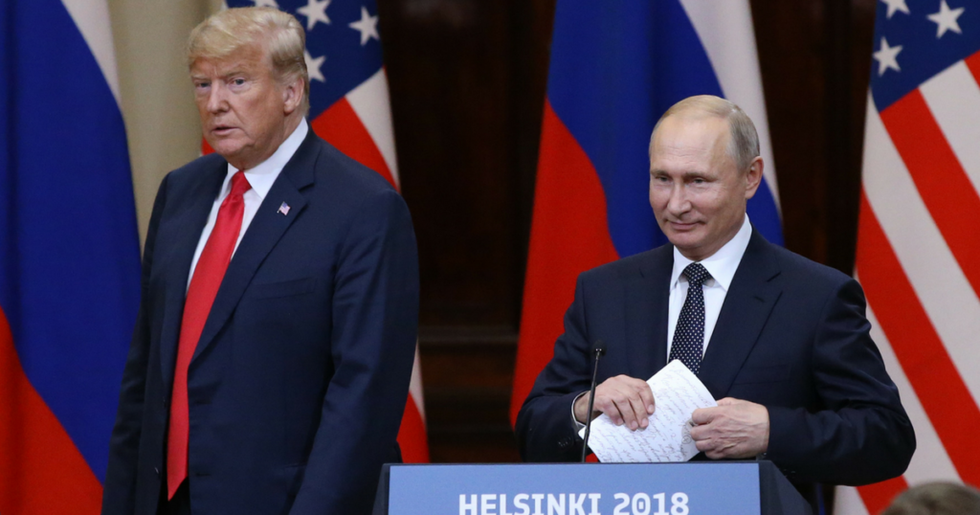 Russian President Vladimir Putin admitted he wanted Donald Trump to be elected president during a press conference following a private meeting the two leaders held on Monday in Helsinki, Finland.

Asked by a reporter if he wanted Trump to win and if he directed anyone to ensure it happened, Putin said:

"Yes, yes I did... because he talked about bringing the U.S.-Russia relationship back to normal."

CRAZY UNREAL! Question to Putin: Did you want Trump to win the election & did you direct any of your officials… https://t.co/ODQxfEIT9G
— ☇RiotWomenn☇ (@☇RiotWomenn☇) 1531761383.0

Putin's remarks were preceded by denials of Russian interference in the 2016 presidential election.

Both Trump and Putin refuted conclusions by all 17 American intelligence agencies that Russia mounted a massive cyber campaign to influence American voters in favor of Trump.

"I don't see any reason why" Russia would interfere in our election, Trump said. Putin also said his country would never meddle in an American election.

Reactions on social media were swift, but people weren't surprised.

Since well before the election, Trump has repeatedly argued that he Russia wanted Clinton to win. Today, we get th… https://t.co/aIIKdXcMmU
— Jeff Zeleny (@Jeff Zeleny) 1531756197.0

@riotwomennn But Trump told us Putin wanted Hillary to win! Yeah riiiiigghht! She was spot-on about EVERYTHING on Trump #PutinsPuppet
— EU Queen FBPE (@EU Queen FBPE) 1531761555.0

“We are the most powerful country in the world and we are getting more and more powerful because I’m a big military person. As an example, if Hillary had won, our military would be decimated,” Trump said.

Trump went on to say he wanted a strong military, therefore Russia wouldn't have wanted him to get elected.

That’s why I say, why would he want me? Because from day one I wanted a strong military, he doesn’t want to see that.

In February, the White House acknowledged the fact Russia interfered in the 2016 election but denied the outcome of the election was affected.

Trump later tweeted: "the results of the 2016 election were not impacted or changed by the Russians." He then accused Clinton and the DNC of colluding with Russia, which is not supported by any evidence.

Later that day, Trump tweeted, falsely, that he had never denied Russia's attack on our election.

FactCheck rated this claim as false, citing nearly two dozen instances in which Trump doubted or denied Russia's actions, despite the evidence and conclusions of the American intelligence community.

You can view FactCheck's list of Trump's Russia denials here.