The Real Wikileaks Smoking Gun Points to Trump, not Clinton 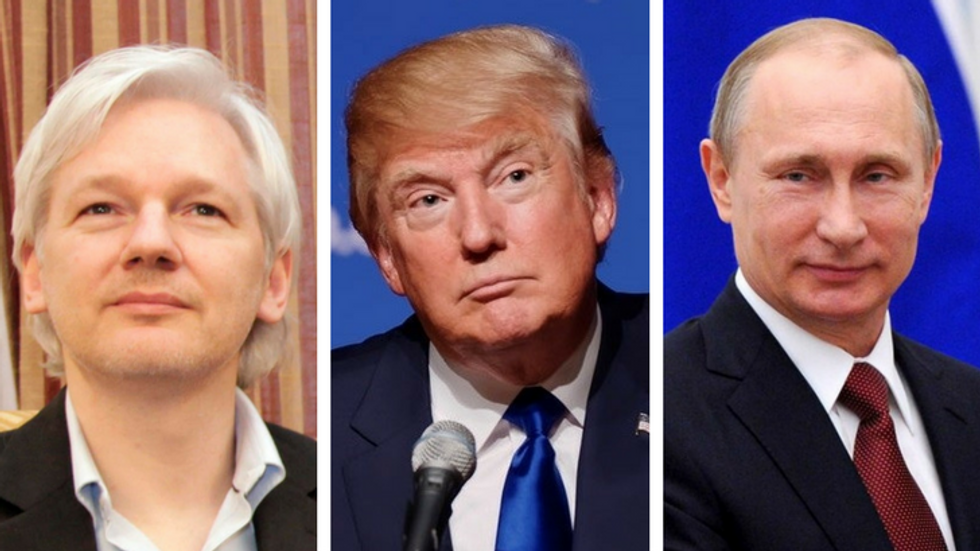 An investigative report published in Newsweek reveals that a Russian news organization falsified information and is leaking phony “Hillary Clinton emails” in an attempt to undermine her presidential campaign.

Despite widespread speculation that Wikileaks would deliver an “October surprise”––information that could effectively end Hillary Clinton’s presidential campaign––its published documents offered no compelling new revelations about the Democratic nominee. Wikileaks released its documents Friday to relatively little fanfare. During Sunday’s presidential debate, Donald Trump preoccupied himself with the allegedly internal emails from Hillary Clinton’s adviser Sidney Blumenthal which showed him “admitting” that Clinton bore full responsibility for the attack on Benghazi and failed in her duties as Secretary of State.

But while attempting to verify the email’s authenticity, Newsweek’s Kurt Eichenwald discovered that the email attributed to Blumenthal did not come from Blumenthal at all––because the email was something Eichenwald himself had written.

Here’s what happened. The documents Wikileaks published over the weekend were emails out of the account of John Podesta, Clinton’s campaign chairman. Sputnik, the Russian online news and radio service, pounced on the documents almost as soon as Wikileaks released them, and claimed to have found an incriminating email from “Blumenthal” that seemed to be, Eichenwald wrote, “the smoking gun finally proving Clinton bore total responsibility” for the attack on Benghazi in 2012. Sputnik even declared the email was likely the “October Surprise” Wikileaks had alluded to earlier in the week.

But the statement Sputnik quoted––”Clinton was in charge of the State Department, and it failed to protect U.S. personnel at an American consulate in Libya. If the GOP wants to raise that as a talking point against her, it is legitimate.”––came from a 10,000-word editorial piece Eichenwald wrote for Newsweek about “the obscene politicization of Benghazi” that Blumenthal had emailed to Podesta. The Russians, Eichenwald continued, “carefully selected” and repurposed a paragraph that happened to mention that there were “legitimate” criticisms about Clinton and Benghazi, “all of which had been acknowledged in nine reports about the attack and by the former secretary of state herself.” They then ascribed those words to Blumenthal.

But here’s the rub: According to Eichenwald, only the Russians, through Sputnik, reported the false story (though a reference did appear in a Turkish publication). Yet last night, while speaking at a rally in Wilkes-Barre, Pennsylvania, Donald Trump told the crowd that he would read out an email from “Sneaky Sidney” Blumenthal.

Trump’s words riled up the crowd,

who called for him to “lock her up.”

Eichenwald was appalled, and today posed a deadly serious question: “So how did Donald Trump,” he wonders, “end up advancing the same falsehood put out by Putin’s mouthpiece?”

The Trump campaign did not respond to Eichenwald’s request for comment.

“I am Sidney Blumenthal. At least, that is what Vladimir Putin—and, somehow, Donald Trump—seem to believe,” Eichenwald wrote. “And that should raise concerns about not only Moscow’s attempts to manipulate this election but also how Trump came to push Russian disinformation to American voters… [But] now that I have been brought into the whole mess—and transformed into Blumenthal—there is even more proof that the Russians are not only orchestrating this act of cyberwar but also really, really dumb.”

It is still unclear precisely why Russian agents would falsify information in an attempt to derail Hillary Clinton’s campaign and aid Donald Trump’s, but the cozy relationship between Trump and the Kremlin can’t help but be highlighted by this. “This is not funny. It is terrifying,” Eichenwald wrote. “The Russians engage in a sloppy disinformation effort and, before the day is out, the Republican nominee for president is standing on a stage reciting the manufactured story as truth. How did this happen? Who in the Trump campaign was feeding him falsehoods straight from the Kremlin?”

“For now, though,” he concluded, “Americans should be outraged. This totalitarian regime, engaged in what are arguably war crimes in Syria to protect its government puppet, is working to upend a democracy to the benefit of an American candidate who uttered positive comments just Sunday about the Kremlin's campaign on behalf of Bashar al-Assad… So no, Mr. Putin, I’m not Sidney Blumenthal. And now that you have been exposed once again, get the hell out of our election. And, Mr. Trump, you have some explaining to do.”