Coming Soon to a Walmart Near You: Robots

Walmart has unrolled a fleet of robots to take the place of humans in its stores. 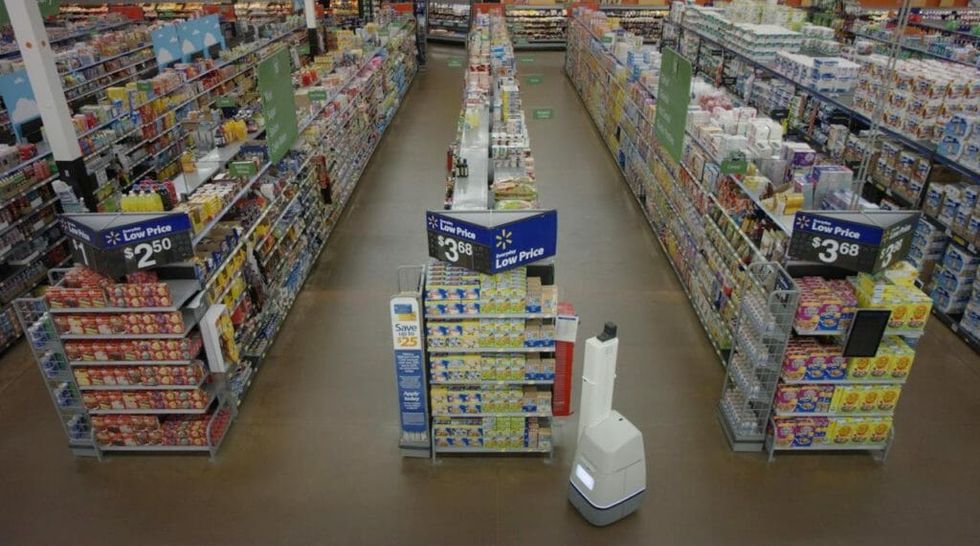 Walmart shoppers can expect to see robots roaming the aisles in 2018. After a successful testing pilot, the retailer plans to introduce robots to 50 stores by the end of January 2018, with more to come. These robots, which do not resemble humans, consist of a large, two-foot high canister base with a tall extension arm outfitted with a scanner and a camera. They cruise aisles, scanning shelves for out-of-stock items, things put in the wrong place by customers, incorrect prices, and wrong or missing labels. They move continuously through the store, alerting human employees of errors.

Walmart says the robots are 50 percent more productive and three times faster than a human. Plus, claims Walmart Chief Technology Officer Jeremy King, human employees are bad at this task. "If you are running up and down the aisle, and you want to decide if we are out of Cheerios or not, a human doesn't do that job very well and they don't like it."

But do they like it better than no job at all? Walmart claims the new robot workforce is designed to help, not replace, human employees. But this isn’t the first time Walmart has brought in automated “workers.” Last year, it introduced kiosks that customers can visit to pickup items ordered online. These huge stations — 16 feet tall and 8 feet wide — eject items on a conveyer belt after customers provide identification.

The next time you see a @BNRobotics robot moving slowly up and down the aisles of your favorite store, please walk… https://t.co/0rVsBJs1Mr
— TribLIVE.com (@TribLIVE.com) 1511289314.0

Customers responded favorably, citing speed and convenience. Walmart is also testing technology that links facial recognition software with video cameras to identify customer dissatisfaction. When the system detects an unhappy customer, it will alert employees to report to a checkout register, in the hopes of improving the experience. The system will also provide Walmart with data about these customers’ buying habits.

But what about the personal touch, the human connection, the face-to-face customer service experience that brings people into the store rather than to a website?

Walmart has struggled to maintain a quality workforce, and the company’s employees (as well as customers) have been the regular subject of unflattering viral videos and commentary on social media. The company also ranks as the lowest-paying large company and is known for being a magnet for crime, including frequent shootings. Rather than investing in its employees and changing its store culture, however, Walmart is focusing on automation and its web operation, in an attempt to take on Amazon, the behemoth that has changed the way we shop.

Walmart’s online strategy includes a better website, acquisitions of smaller companies like Jet.com, Bonobos.com, and Modcloth, and, in the near future, the integration of virtual reality into its website, which will allow customers to “experience” products in greater detail. Another development combines technology with in-store visits: Customers will be able to return an unwanted item purchased from the website by scanning it with a cellphone app and then completing the return by bringing it to the store, where an employee scans it in. The in-store part of the process is supposed to take 30 seconds.

All of these automated processes mean that Walmart’s employees will become less necessary. As many as 7.5 million retail jobs — or 38.4 percent of the current retail workforce — risk being replaced by some form of automation in the next decade, according to a study by financial services firm Cornerstone Capital Group.

"You're not going to see a robot stocking shelves, at least in the near term," said John Wilson, head of research at Cornerstone. "But technology would reduce the need for as many people to do so. More efficiency means fewer things for people to do."

The retail industry has eliminated hundreds of thousands of employees in 2017, and is struggling with the collapse of established retailers like Sears and Toys R Us, as well as widespread store closings across the sector. The most store closings on record have been tallied in 2017.

"Store closings have to do with overbuilding and e-commerce," Wilson said. "But going forward, job losses will really be about automation."