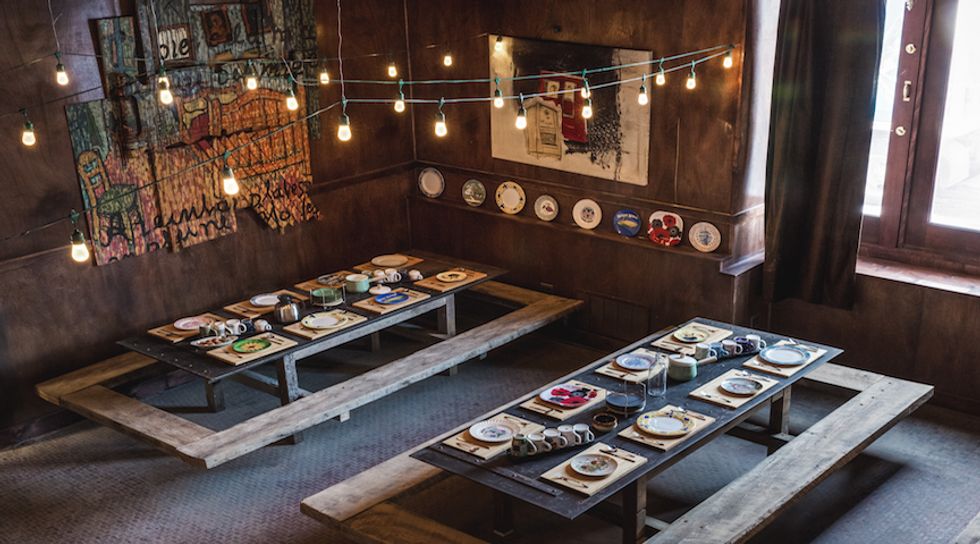 William Street Common has been open for less than two weeks in Philadelphia, but owner Avram Hornik says it’s already hitting its numbers even with a totally different business model than most restaurants.

The “indoor beer garden,” as he calls it, which serves up comfort food and craft beer at communal tables, pays all of its employees, from the servers to the dishwashers, at least $15 an hour plus paid sick leave and health insurance benefits. The customer experience is unique as well: tips aren’t mandatory and all the prices for different beers are the same. So every drink costs $6: $5 for the drink itself plus a 20 percent service charge.

“We wanted people to compare apples to apples,” he said. “Instead of charging $6 and no tip, we wanted the customers to understand that the staff is being taken care of.”

The service charge also doesn’t go straight to the individual server. It goes into a pot that’s used to make sure everyone is making that $15 wage, although management will make up the difference if what they make in revenue falls short. If there’s money left over at the end of a pay period, employees divide it up based on a point system related to experience and other factors. “We’re projecting, based on our budgeting and depending on the employee, between three to ten dollars an hour in addition from that bonus pool,” he said. On top of that, 5 percent of gross sales gets put in a different pot to pay for paid sick leave and health insurance for full-time employees, but any extra after that will be put toward whatever uses a committee of workers wants.

The decision to have such a unique business model came after he thought about the perils of tipping. “Some people just tip the same amount, but some people base it on how quickly the food was there, whether we were out of something, whether the server was there when they wanted them to be,” he pointed out. “So much of that is out of the control of the individual server… So why would it be fair for the service employee to be responsible for the poor decisions of management?” Research has also found that tips vary more on looks and race than on actual service.

It also adds stability to the job. “Being in the restaurant and bar business is a lot like being a gambler or a farmer,” he noted. Given that tips vary so much and owners often don’t make up the difference even if they don’t bring wages up to minimum wage, restaurant servers have a poverty rate nearly triple that of everyone else. His model “essentially creates a guaranteed floor. But we’re also capping the ceiling.” That’s because the tipping gets shared equally with all employees. “We didn’t think it was fair [that] in some places you have dishwashers earning 10 dollars an hour and the bartender earning 30 dollars an hour,” he said.

The hope is that these changes will benefit the customers and, in turn, the restaurant. “That atmosphere among the employees, a sense of community and empowerment and happiness with the job, is going to translate into a better environment for customers,” he said. “By having happy staff customers are going to be happier too.”

The model may also be helpful with hiring: Trisha Noel, who is in charge of talent acquisition and is the restaurant’s employee advocate, said it’s already had between 60 and 70 applications. “I think it’s pretty impressive for a new restaurant,” she said.

It’s definitely more of a gamble for the owners. “It freezes your fixed costs to the point where if you’re wrong, or it snows, you’re losing money on that day,” Hornik said. The goal is to make up for those fixed costs by doing more business. “We’re making less money per person but hopefully serving more people.” And so far it’s panned out: in its first week, “we’ve hit our numbers, we’re right in line with our budget,” he said. What’s more, “it looks like there’s going to be money after the first week in the [tip] pool even though we overstaffed for the opening.”

William Street Common isn’t the only one trying out new models: both high-end restaurants in New York and the West Coast as well as lower end places in Pittsburgh and Kentucky, plus even cafes and bars, have done away with tipping and decided instead to pay higher wages and better benefits.

Hornik calls his business model a “hypothesis,” but doesn’t see much room to be proven wrong. “It’s important to create a brand where we can pay people a fair living wage,” he said. “That’s the challenge. If we can’d do that, then we should be in the business at all.”