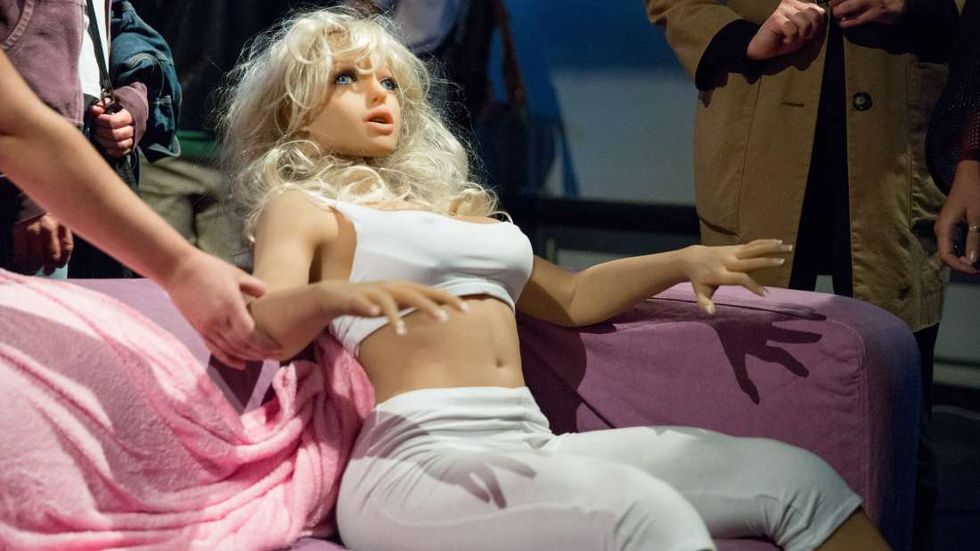 It’s hard to believe, but even Samantha the Sex Robot might need to be reprogrammed to ward off unwanted sexual advances.

It sounds like something out of a futuristic novel, but the robot’s developers were shocked by how Samantha was treated at the Ars Electronica Festival in Linz, Austria.

Developed by Dr. Sergi Santos and Arran Lee Squire at Synthea Amatus, Samantha might be better described as an artificial companion because she’s able to converse about many topics, like philosophy and science, and tell thousands of jokes. She is nothing like a novelty blow-up sex doll, and far more realistic than a high-quality mannequin. Samantha has been available for purchase for several months now for about $5,000 US.

Brimming with the latest in artificial intelligence (AI)  — and with sensors located throughout her body — Samantha responds to many forms of touch, including family, romantic, and sexual.

The company is developing male companions, too. For many early adopters, she’s exactly as her name implies — an incredibly expensive, lifelike, anatomically-correct robot designed to provide companionship.

In truth, Samantha is not so far removed from the “robots “ featured in a few of the original Star Trek episodes and, not surprisingly, many of the same moral questions that this landmark sci-fi series tackled in the 1960s still apply. It’s worth asking if building thousands of robots to do our bidding is really just a high-tech form of slavery, or what rights might accrue to our creations as artificial intelligence moves closer and closer to sentience.

Synthea Amatus robots have been designed with lonely men (and women) in mind, but Samantha isn’t programmed to accept just any sexual advance. Santos says that she is programmed like a game, and she only responds to romance and gentle touch. The men who buy this companion are encouraged to consider what it takes to meet her “needs” for sex, and, later, “pleasure.”

As you might expect, the media — particularly tabloid newspapers — have covered the story extensively since she was introduced to the world. At the Ars Electronica Festival, thousands of people stood in line to meet and interact with Samantha.

On the third day, she was left alone at the Synthea Amatus booth, and passers-by were free to engage without supervision. When the developers returned, Samantha had been prodded, used, and groped so aggressively that she was badly damaged.

"When we got her back it was clear she had been roughly treated, which is not how she should be handled — she should be treated with respect,” Arran said.

"There was damage to the neck and mouth, my business partner described these people as 'barbarians.' This is not how she should be treated, she has sensors all over her body and needs a gentle touch.”

With artificial intelligence, we are entering uncharted territory. We simply don’t know if sex robots like Samantha will prevent antisocial behavior among humans, or encourage it. Were the attendees who roughed up a $5,000 sex doll engaging in boorish, juvenile behavior, or were their impulses darker, and now more likely to be expressed with other men and women?

Some AI experts think it’s far preferable for people to buy a sex robot than to pay a sex worker, but is it really? The sex worker pretends. The sex robot is programmed. Do either solve any societal problems around loneliness and intimacy?

Where will it end? One Hong Kong graphic designer made a $70,000 robot that looks like Scarlett Johannson, he said, to fulfill a childhood dream. That is where technology has taken us.

Some European brothels are already adding sex robots to their list of services to meet demand. In one survey, a surprising 49 percent of American men think it will be commonplace within their lifetimes. In other countries, the timeline is a decade or less.

Right now, we’re not talking about Pris — the realistic pleasure model — from Blade Runner. But that day might not be too far off, and the time to talk about it is now.