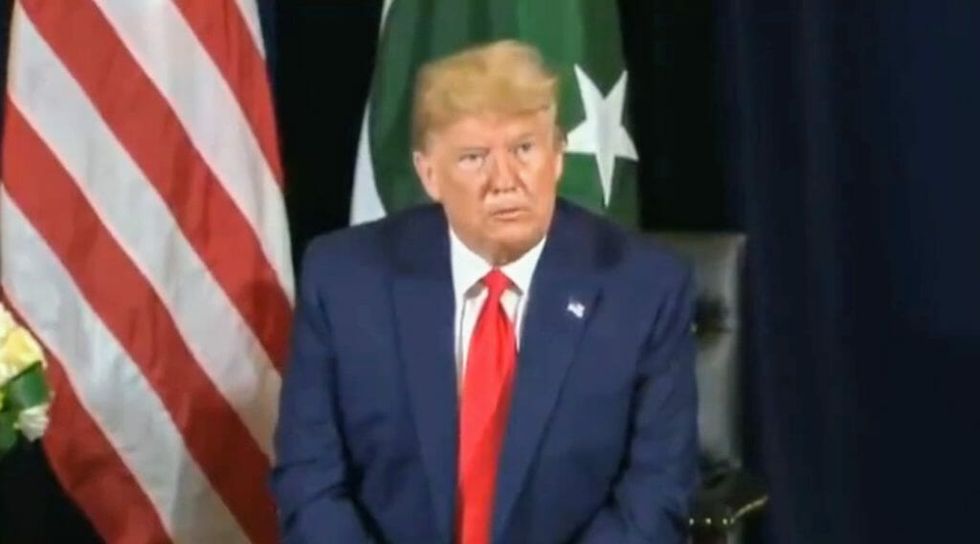 President Donald Trump made an appearance at the United Nations Monday before the first day of the high-level General Debate slated for Tuesday, September 24. Many world leaders were in attendance and the President took the opportunity to sit down with the Pakistani Prime Minister Imran Khan.

During the press conference, the discussion turned to topics other than the United Nations or Pakistan when a member of the Pakistani press asked about the Nobel Prize.

Reviving Trump's prior false claim of being asked by Prime Minister Narendra Modi of India to negotiate between Pakistan and India over the disputed territory of Kashmir, the reporter stated:

"If you can solve this outstanding issue of Kashmir, very likely and definitely you’ll be deserving a Nobel Prize."

Which Trump did not seek to dispute. In fact, he made it clear he already thinks he's earned a Nobel Prize "for a lot of things."

"I think I’m going to get a Nobel Prize for a lot of things, if they gave it out fairly, which they don’t."

The President brought up the Nobel Prize again outside the UN General Assembly stating:

"They gave one to Obama immediately after his ascent to the presidency, and he had no idea why he got it. You know what, that was the only thing I agreed with him on."

Online, Trump got a less than ringing endorsement for his Nobel worthiness—at least for any current categories.

@owillis @ellyay As soon as they start awarding a prize for boastful bullshitting, @realdonaldtrump will have a chance.
— Crummyworld 🍑 (@Crummyworld 🍑) 1569260324.0

Others pointed to jealousy as a motivator for President Trump—and not just envy over the popularity of Barack Obama.

@owillis I doubt Trump even knows what the Nobel Prize is; he’s just insanely jealous that Obama has one and he doesn’t.
— Henry Smiley (@Henry Smiley) 1569260058.0

@owillis Little Timmy sitting in the corner at little Billy's birthday party, upset that the presents aren't being given out fairly.
— A. Brian (@A. Brian) 1569273016.0

Trump's near obsession with the accomplishments of President Barack Obama has dominated his campaign and presidency. Obama is one of four Presidents to win a Nobel Peace Prize.

President Theodore Roosevelt was the first, winning in 1906. Woodrow Wilson followed winning in 1920 for his efforts to create the League of Nations which became the United Nations.

President Jimmy Carter won after his presidential term ended, in 2002, for finding "peaceful solutions to international conflicts, advancing democracy and human rights, and promoting economic and social development." The last President to win was Barack Obama in 2009 for "efforts to strengthen international diplomacy and cooperation."

While Trump claimed Obama had no idea why he won, the 44th President actually gave a humble acceptance speech, stating:

"I would be remiss if I did not acknowledge the considerable controversy that your generous decision has generated. In part, this is because I am at the beginning, and not the end, of my labors on the world stage. Compared to some of the giants of history who've received this prize—Schweitzer and King; Marshall and Mandela—my accomplishments are slight."

The book The World's Most Prestigious Prize: The Inside Story of the Nobel Peace Prize is available for pre-order here.