Trying to save him from himself. 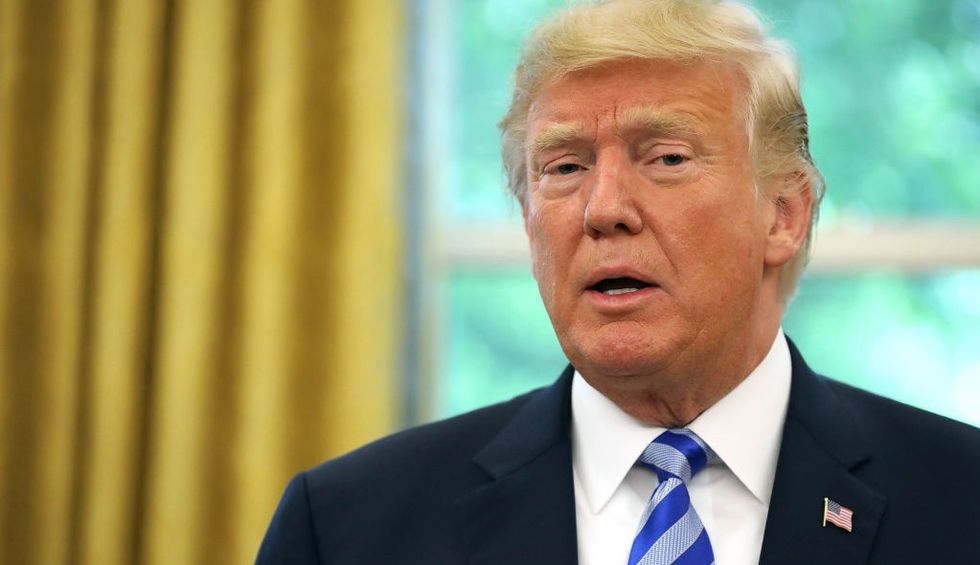 President Donald Trump maintained for months he wanted to speak to Special Counsel Robert Mueller. To that end, his personal legal team worked on negotiating terms agreeable to themselves for an interview between the President and the Special Counsel.

But did Trump really want to speak to Mueller as he so often claimed?

According to a new book from investigative journalist Bob Woodward, the answer is "maybe, but not really."  In Fear: Trump in the White House, Woodward shares the results of "hundreds of hours of interviews with firsthand participants and witnesses."

One area addressed in Fear involved preparations with the President and his then legal team for a potential open interview—without restrictions—between the Mueller investigation and Trump. According to Woodward, Trump's lead lawyer John Dowd set up a practice session with the President on January 27, 2018.

In the comfort of the White House residence, Dowd battered the President with questions regarding details of the Russia investigation. It did not go well.

Political pundits—both critics and supporters of the President—posited Trump speaking to Mueller was ill-advised. According to witnesses of the Dowd practice session in January, it went as poorly as expected.

The rehearsal questions resulted in "stumbles, contradictions and lies" until Trump's temper boiled over. The resulting 30 minute rant ended with the President finally agreeing that sitting down with Mueller for an interview would end badly for him.

The hhalf-houroutburst began when Trump stated:

"This thing’s a goddamn hoax."

...and ended when the President acknowledged:

"I don’t really want to testify."

However, the President notoriously puts great emphasis on public perception. He worried how a President refusing to testify would look. Which led to the real bombshell about January's practice session.

According to Woodward's account, during a March 5 meeting with the Special Counsel, Dowd and another Trump legal team member—Jay Sekulow—pushed to have Trump's name removed from Mueller's interview list permanently.

Dowd also argued Trump's natural tendency to lie made him an unreliable witness. In reference to answers the President gave during his practice interview, Dowd stated:

"He just made something up. That's his nature."

But by the end of March, Trump again stated he wanted to meet with Mueller. Dowd told the President:

"Don’t testify. It’s either that or an orange jumpsuit."

"I’ll be a real good witness."

"You are not a good witness. Mr. President, I’m afraid I just can’t help you."

Dowd resigned as the President's lawyer on March 22.

People reacted to the news of Trump's legal team's intervention with Robert Mueller to head off an interview with the President.

"[Trump's lawyers] literally explained to Mueller how they conducted a mock interview with Trump, and he was so una… https://t.co/l2aTWHmIOg
— Crashing Bore (@Crashing Bore) 1536089493.0

Talk of an interview with Trump for the investigation into Russian interference in the 2016 presidential election and possible ties with the Trump campaign—beyond those already established in the congressional testimony of Donald Trump Jr. and Jared Kushner—died off recently.

The President's current lead lawyer, Rudy Giuliani, spoke to the media on numerous occasions about an interview between Trump and the Special Counsel, but only on the President's terms. But while he spoke of arranging an interview, Giuliani and his boss both attacked Robert Mueller and the Russia investigation online and in interviews.

Both frequently referred to the Department of Justice investigation—which already resulted in multiple indictments, guilty pleas and guilty verdicts—as a witch hunt and demanded it come to an end.

Did Trump ever want to speak to Mueller? Possibly. Was it ever a good idea? Experts and armchair lawyers all said no.