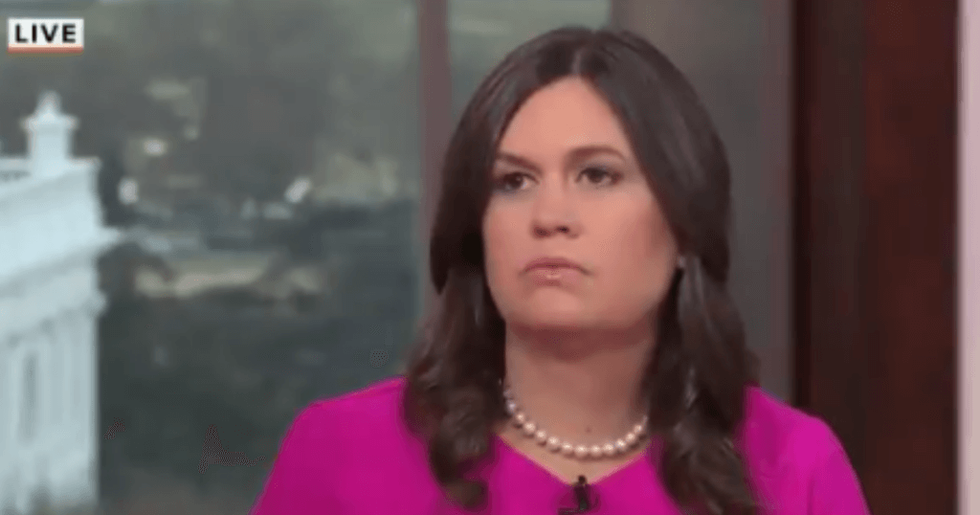 In reality, Barr wrote that Mueller “did not establish that members of the Trump Campaign conspired or coordinated with the Russian government in its election interference activities” and “ultimately determined not to make a traditional prosecutorial judgment” on whether the president obstructed justice.

“The Special Counsel, therefore, did not draw a conclusion – one way or the other – as to whether the examined conduct constituted obstruction.”

Barr noted, however, that although the report “does not conclude that the President committed a crime, it also does not exonerate him.”

On Monday, Sanders was pressed on the discrepancy between her tweet and Barr's summary during an appearance on The Today Show.

Noting Barr's words, Savannah Guthrie asked Sanders regarding obstruction of justice: “Would you acknowledge it is incorrect for the President to call this a total exoneration?"

“Would you acknowledge it is incorrect for the President to call this a total exoneration?” @savannahguthrie asks… https://t.co/tDxEgV8TlQ
— TODAY (@TODAY) 1553512672.0

Sanders replied by doubling down on the administration's dubious assessment.

"Not at all. It is a complete and total exoneration and here's why. The special counsel said they couldn't make a decision one way or the other. The way the process works is they then leave it up to the attorney general."

Guthrie pointed out that some critics, such as House Democrats, are wondering how Barr was able to draw such a "snap judgment" given the length and breadth of Mueller's investigation. Guthrie alluded to a memo drafted by Barr last summer in which suggested Barr opined that there was no obstruction case to be made against Trump.

Sanders brushed off those concerns and praised Barr.

"It's not a snap judgment," Sanders replied. "Anybody that knows Attorney General Barr including a number of Democrats who have known him for decades talked about what a great individual he is."

When Guthrie brought up Barr's memo again, Sanders said that we should "look at Bob Mueller's report... in the legal community when you can't convict somebody on something, you're exonerating them."

Note: Mueller's report - and therefore his findings - have not been made public.

Guthrie explained to Sanders that "to say you can't prosecute someone because they don't meet the legal standards of the statute is not an exoneration."

@TODAYshow @SavannahGuthrie @PressSec It amazes me how she is so loyal to DT but not her own country.
— Donna Neubig (@Donna Neubig) 1553521901.0

@TODAYshow @NBCNews @SavannahGuthrie @PressSec “ while this report does not conclude the president committed a crim… https://t.co/DG5aU2q5JA
— Regina Marie (@Regina Marie) 1553521916.0

Barr made it crystal clear in a 2018 memo to the Justice Department - which he penned as a private citizen - what he thought of Mueller's investigation.

alleged obstruction," Barr wrote in a 19-page memo to the Justice Department in June. "Apart from whether Mueller [has] a strong enough factual basis for doing so, Mueller's obstruction theory is fatally misconceived. As I understand it, his theory is premised on a novel and legally insupportable reading of the law. Moreover, in my view, if credited by the Department, it would have grave consequences far beyond the immediate confines of this case and would do lasting damage to the Presidency and to the administration of law within the Executive Branch."

Barr, in no uncertain terms, had decided even before his appointment that whatever Mueller ended up discovering "should be rejected."

Below are the reasons why, in Barr's own words.

statute's plain meaning and would directly contravene the Department's longstanding and

an application was intended."

Second: the president cannot obstruct justice. Recall that it was Trump's firing of FBI Director James Comey over "this Russia thing" that led to Mueller's appointment.

"Mueller's premise that, whenever an investigation touches on the President's own

conduct, it is inherently 'corrupt' under 1512 for the President to influence that matter is

insupportable. In granting plenary law enforcement powers to the President, the Constitution

places no such limit on the President's supervisory authority. Moreover, such a limitation cannot

be reconciled with the Department's longstanding position that the 'conflict of interest?' laws do

not, and cannot, apply to the President, since to apply them would impermissibly 'disempower'

Third: executive authority is not subject to a review of the president's intent.

on subjective motive, would violate Article II of the Constitution by impermissibly burdening the

exercise of core discretionary powers within the Executive branch."

"Even if one were to indulge Mueller's obstruction theory, in the particular circumstances

here, the President's motive in removing Comey and commenting on could not have been

'corrupt' unless the President and his campaign were actually guilty of illegal collusion. Because

the obstruction claim is entirely dependent on first finding collusion, Mueller should not be

In short: when a president does 'x,' it is not illegal.

Until we see Mueller's report, we are at the mercy of those who wish to use it to fit their own narrative.

Some have even suggested that Barr is intentionally covering up the truth to protect Trump because they believe that is precisely what he was hired to do.

"For staunch supporters of the 'unitary executive,'" Stern adds, "it is a satisfying affirmation of Trump’s sweeping powers to manipulate his subordinates to protect his own skin. For the rest of us, the summary is a riddle, opaque in its reasoning and premature in its conclusions."