States Strike Back on Trump Immigration and Refugee Ban 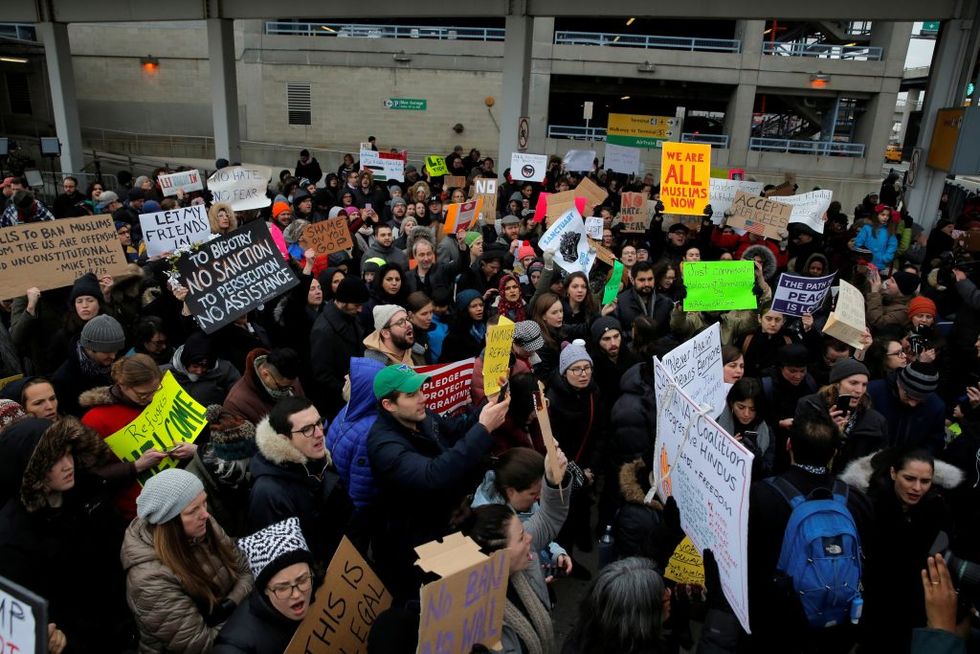 Attorneys General from 15 states and the District of Columbia have issued a joint statement vowing to fight the Trump administration’s executive order barring Muslims from 7 countries from entering the country as well as his permanent ban on refugees from Syria. The group is considering their own court challenge, which would raise the stakes considerably against the White House because, to date, only individual cases have been brought. Court orders came down late Saturday and early Sunday from four separate federal districts in New York, Massachusetts, Washington and Virginia, each affecting the order in some way.

The statement from these attorneys general against the administration minced no words.

“As the chief legal officers for over 130 million Americans and foreign residents of our states, we condemn President Trump's unconstitutional, un-American and unlawful Executive Order and will work together to ensure the federal government obeys the Constitution, respects our history as a nation of immigrants, and does not unlawfully target anyone because of their national origin or faith," they wrote. "Religious liberty has been, and always will be, a bedrock principle of our country and no president can change that truth.”

The states joining in the statement include the populous blue states of New York, Pennsylvania, and Illinois, as well as Washington, Massachusetts, Hawaii, Oregon, Connecticut, Vermont, Rhode Island, Maryland and the District of Columbia but also includes “swing" states of New Mexico and Maine and Iowa.

The statement noted that on Sunday morning, federal courts issued a stay of the “dangerous Executive Order,” a development applauded by the attorneys general. The statement further pledged that they intend to "use all of the tools of our offices to fight this unconstitutional order and preserve our nation’s national security and core values.” Their goals are to have “as few people as possible suffer from the chaotic situation” that the order has created.

On Sunday, spontaneous protests sprang up across the nation's airports as protesters sought to prevent the detention and deportation of a number of persons. Crowds at New York’s JFK, California’s LAX and SFO, Washington’s Seattle’s Tacoma and Illinois’ Chicago-O’Hare were large and boisterous. Protests also sprang up in more conservative areas, including in Atlanta, Georgia, Dallas, Texas and even Boise, Idaho. Meanwhile, large crowds gathered also in public spaces in Boston, New York and Washington, D.C. among many others.

Already, there is significant legal confusion over the scope and legality of the executive order, and perhaps more ominously, there were initial indications from the Trump administration that it might not abide by the judges’ orders. Even after the orders came down, for example, persons being held in detention were not permitted by the Customs and Border Patrol to see their lawyers and were not immediately released. Some were placed on planes to be sent back to their home countries, only to be pulled off again. It is unclear whether all those detained were released into the U.S. or whether any were sent back to their home countries.

Further, the Department of Homeland Security issued a statement that seemed to defy the courts outright: "President Trump's Executive Orders remain in place — prohibited travel will remain prohibited, and the U.S. government retains its right to revoke visas at any time if required for national security or public safety.” It added that the department would "continue to enforce all of President Trump's Executive Orders in a manner that ensures the safety and security of the American people.”

Since then, the Department of Homeland Security issued a follow-up statement indicating that it "will comply with judicial orders; faithfully enforce our immigration laws, and implement the president's Executive Orders to ensure that those entering the United States do not pose a threat to our country or the American people.” It remains unclear what parts of the Executive Orders the latter portion of the statement is referring to, but the compliance portion at least appears to avoid a constitutional crisis, where the Executive would be openly flouting the judiciary.