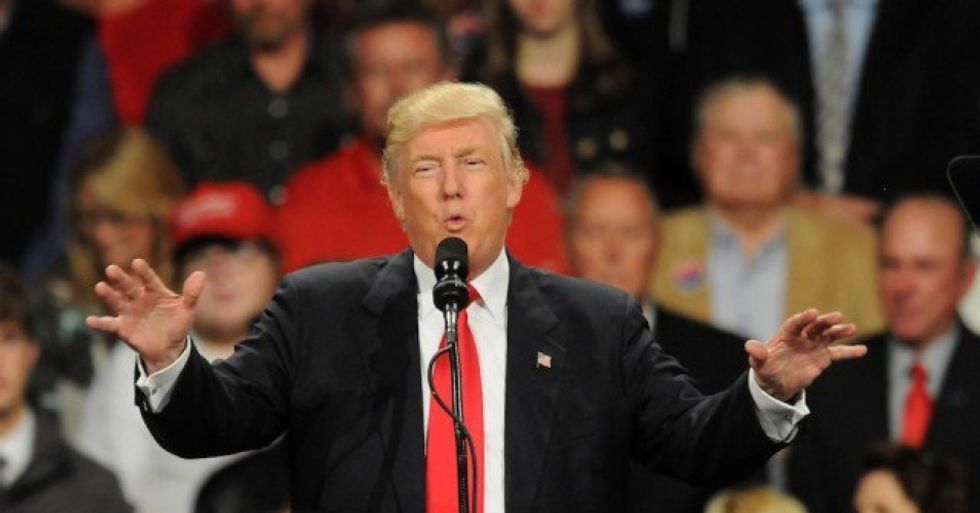 Federal judges in Hawaii and Maryland cited President Donald Trump's own rhetoric and tweets as evidence of his desire to ban Muslims from the United States as they issued nationwide temporary restraining orders on his new travel ban.

In his decision blocking the Trump administration’s revised travel ban, which would have banned people from Iran, Libya, Somalia, Sudan, Syria, and Yemen from entering the US for 90 days and all refugees for 120 days, Judge Derrick Watson of Hawaii wrote that all the evidence he needed was on the news––and on Trump's personal Twitter account. The opinion is replete with the president's own words, including ‘Donald J. Trump is calling for a total and complete shutdown of Muslims entering the United States,'” a quote from the Trump campaign’s own website.

In his decision, Judge Watson cites a tweet Trump wrote in January, explaining why the administration rushed to put the original travel ban into effect. It was enough to convince him that the intention to ban Muslims is clear, even if the word "Muslim" never appears in the executive order.

“These plainly worded statements betray the executive order's stated secular purpose," Watson wrote."The record before this court is unique," he continues elsewhere, and it includes significant and unrebutted evidence of religious animus driving the promulgation of the Executive Order and its related predecessor." He cites the following from an interview Trump gave Anderson Cooper last spring:

In March 2016, Mr. Trump said, during an interview, “I think Islam hates us.” Mr. Trump was asked, “Is there a war between the West and radical Islam, or between the West and Islam itself?” He replied: “It’s very hard to separate. Because you don’t know who’s who... But there’s a tremendous hatred. And we have to be very vigilant. We have to be very careful. And we can’t allow people coming into this country who have this hatred of the United States. . . [a]nd of people that are not Muslim.”

Watson also cites words from presidential staffers, including Stephen Miller, who authored the first ban, who have argued that a temporary ban on travel for refugees and visitors from predominantly Muslim nations is necessary until national security officials reassess vetting procedures. In a February interview, Miller told reporters that the new travel ban would be "responsive to the judicial ruling" holding it up and have "mostly minor technical differences."

The illogic of the Government's contentions is palpable. The notion that one can demonstrate animus toward any group of people only by targeting all of them at once is fundamentally flawed. Equally flawed is the notion that the Executive Order cannot be found to have targeted Islam because it applies to all individuals in the six referenced countries. It is undisputed, using the primary source upon which the Government itself relies, that these six countries have overwhelmingly Muslim populations that range from 90.7% to 99.8%. It would therefore be no paradigmatic leap to conclude that targeting these countries likewise targets Islam. Certainly, it would be inappropriate to conclude, as the Government does, that it does not.

U.S. District Judge Theodore Chuang, who issued the Maryland ruling, also granted a preliminary injunction on a nationwide basis, but declined to stay the ruling should an emergency appeal be filed. On the question of evidence, Judge Chuang agreed with Judge Watson.

"These statements, which include explicit, direct statements of President Trump's animus toward Muslims and intention to impose a ban on Muslims entering the United States, present a convincing case that the first executive order was issued to accomplish, as nearly as possible, President Trump's promised Muslim ban," he wrote Thursday.

"In particular," he continued, "the direct statements by President Trump and [former New York City Mayor Rudy] Giuliani's account of his conversations with President Trump reveal that the plan had been to bar the entry of nationals of predominantly Muslim countries deemed to constitute dangerous territory in order to approximate a Muslim ban without calling it one precisely the form of the travel ban in the first executive order."

In a statement last night, the Justice Department said it will defend the new travel ban. "The Department of Justice strongly disagrees with the federal district court's ruling, which is flawed both in reasoning and in scope. The President's Executive Order falls squarely within his lawful authority in seeking to protect our Nation's security, and the Department will continue to defend this Executive Order in the courts," the agency said.

Trump decried Judge Watson's ruling during a rally last night in Nashville, referring to it as "the bad, sad news." He pledged to take the issue to the Supreme Court, calling Watson's ruling "an unprecedented judicial overreach" to the cheers of enthusiastic supporters.

“Let me tell you something,” Trump said. “I think we ought to go back to the first one and go all the way. The danger is clear, the law is clear, the need for my executive order is clear.”