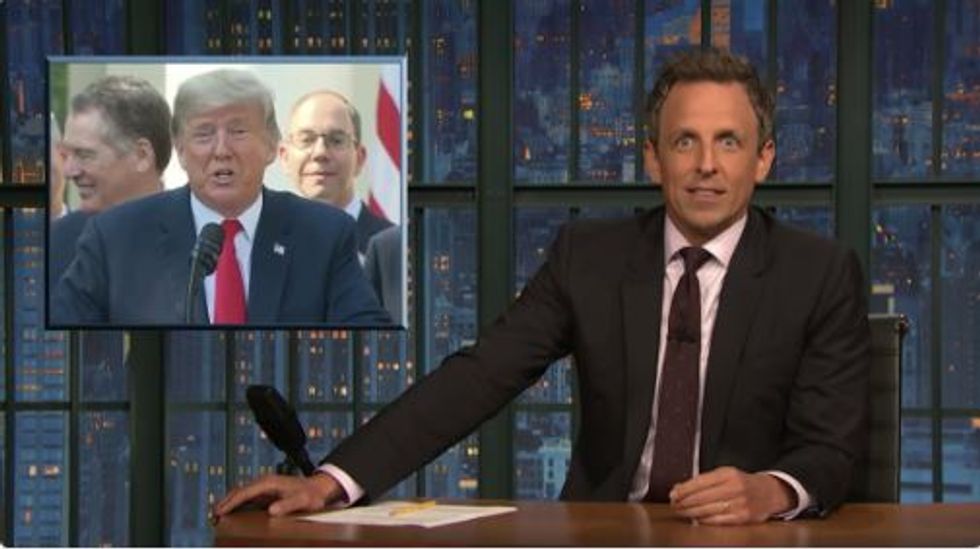 As a former Weekend Update host on Saturday Night Live, Late Night host Seth Meyers is used to eviscerating celebrities and politicians from a news desk.

He reminded Americans during a segment of the popular show: A Closer Look. During the segment, Meyers set his sights on sexist and belligerent remarks made by President Donald Trump to ABC News White House correspondent Cecilia Vega and another female reporter yesterday in a press conference.

After playing clips of the tense interactions, the camera cut back to Meyers, who asked incredulously:

"I mean How much of a sexist dick could you possibly be?"

After holding off the audience's applause, Meyers continued:

“It’s almost like he saw someone else getting attention for acting like a maniac on TV and thought ‘I can top that.'"

That's when Meyers pulled up a picture of Supreme Court nominee Brett Kavanaugh, whose combative testimony during a hearing regarding sexual assault allegations against him alarmed Americans everywhere.

The clip from Late Night with Seth Meyers is available below:

Viewers were quick to agree:

Meyers wasn't the only one to notice.

After Trump told Vega that he "knew you're never thinking. You never do," the misogynistic undertones of his insults stuck out to many others.

my first thought about Trump's exchange with Cecilia Vega, the woman reporter in the Rose Garden: how much pent up… https://t.co/MG9VAWS4XM
— Alex Berg (@Alex Berg) 1538420384.0

The White House exacerbated the matter by editing the exchange in the official transcript of the press conference.

In a rare display of humility, the White House released a corrected transcript on Tuesday with "thanking" changed to "thinking," but, perhaps unsurprisingly, it did not offer an apology on the president's behalf.

It's also unsurprising that Seth Meyers would bring up a picture of Brett Kavanaugh. After his accusers came forward with sexual assault allegations, many have demonstrated blatant or microagressive sexism in an effort to flock to his defense.

Though Trump insulting female reporters is nothing new and though Senate Judiciary Republicans seem determined to "plow right through," Kavanaugh's nomination, the behavior becomes less acceptable each time men like Meyers call it out.