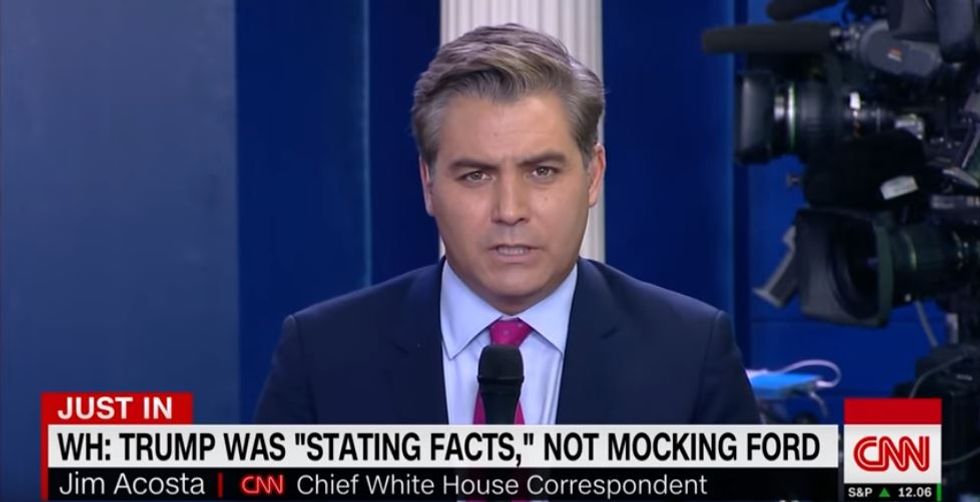 The president mocked Ford's inability to remember some details from the night of the assault, which allegedly occurred in the early 80's.

After national outrage, the White House insisted that Trump was not "mocking" Ford, but simply stating facts.

Of course, by any measure, Trump was mocking Ford's testimony, which CNN acknowledged with this bizarre headline:

The reporter featured in the shot, Jim Acosta, lamented how often these types of headlines prove necessary at this moment in American politics.

Many seemed to agree.

Though Trump mocked Ford for inability to remember certain details, experts have pointed out why that's normal and may even make Ford more credible.

Harvard Medical School consultant Jim Hopper pointed out why this is:

Just because there are pieces missing doesn't mean those that remain aren't accurate, especially those central details of the experience that may be burned into the brain to the day they die.

And while the White House may say that Trump was just stating facts, that aspect isn't true either. Dr. Ford actually answered all the questions the president posed at the rally during her testimony, as late night host Stephen Colbert pointed out by interspersing Trump's words with Ford's.

It's because of statements like this that Acosta was right about chyrons like this frequently being necessary in a time when truth is frequently juxtaposed with lies on a national scale. While some chyrons have been blatantly sarcastic, most are just reiterating the truth, however scary or clear-cut.

With a president that routinely makes false statements, it's good to have no-nonsense chyron writers to call him out.