Who Knew Salmonella Might Be the Key to Fighting Cancer? 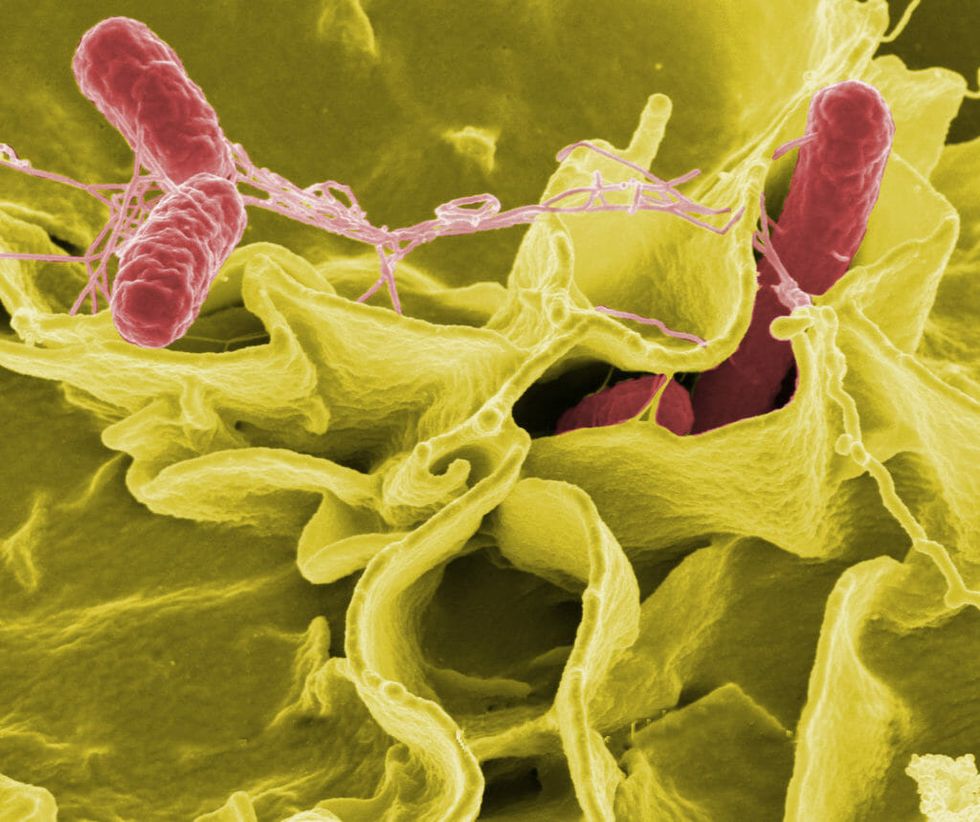 One of the reasons cancer is so hard to treat effectively is because the body doesn’t recognize the cancer cells as dangerous. Because the rogue cells aren’t foreign, the body’s immune system doesn’t activate, and the cells are left to multiply.

New research, reported in Science Translational Medicine, may change that.

Researchers at the Chonnam National University in Hwasun Hospital in Jeonnam, Korea injected a modified strain of the food poisoning bug Salmonella into tumors. The strain was engineered to be much less potent than the strain that causes food poisoning, but it was powerful enough to still be recognized by the immune system as a foreign invader. The researchers then “weaponized” the bacteria by genetically modifying it to secrete a protein known as FlaB.

The results have been compelling. In one set of experiments, biologists Jung-Joon Min and Joon Haeng Rhee injected the Salmonella into 20 mice with human colon cancers. After several days, the mice had cleared the bacteria from their organs, but not from the cancerous tumors. After four months, the tumors were undetectable in more than half of the mice, and they remained healthy throughout the experiment. Control mice infected with bacteria that did not secrete FlaB died from the cancer.

Joon Haeng Rhee, one of the researchers on the experiments and a professor of microbiology at Chonnam, said: “We believe that this was a kind of groundbreaking trial to turn tumor-helping immune cells, Dr. Jekyll, into tumor-killing ones, Mr. Hyde.”

Kevin Harrington, a professor of biological cancer therapies at The Institute of Cancer Research in London, noted that “until now, attempts to use bacteria as anti-cancer therapies have had limited success, both in the laboratory and in the clinic. The current work by [the scientists] represents a fascinating new approach to using bacteria. Instead of asking the bacteria to kill cancer cells directly, the researchers have genetically engineered salmonella so that it triggers the immune system to mount an attack on the tumor.”

The team plans to conduct further animal studies to refine the technique. They hope to run clinical trials on humans in the next few years.

Similar work using Salmonella to fight cancer has been done by a U.S. team based in San Diego. Here, the team used Salmonella to transport an anti-cancer chemical, Haemolysin E, to cancer cells. When combined with chemotherapy in mice, the animals had less tumor activity and a greater survival rate than those who received chemotherapy alone.

These experiments are creating momentum behind the use of bacterial therapy generally. “Bacteria can theoretically deliver any protein or molecule that they are capable of producing,” said Omar Din, a University of California, San Diego graduate student who performed the research. Paradoxically, this means bacteria could be highly effective at treating infections.

But for now, the most excitement is around cancer treatment, both because of its efficacy, and because of the quality of life it would afford patients. “We believe there is huge mileage in pursuing research into this type of treatment,” said Paul Dyson, a professor at Swansea University in England. “Existing evidence indicates there would be few or no side effects.”