Is CERN Opening a Portal to Hell? How the LHC Deals with Conspiracy and Doomsday

As the Large Hadron Collider prepares to start another round of particle-smashing experiments, a fresh wave of conspiracy theorists is growing. CERN addresses some of those fears in its “Surreal FAQ." 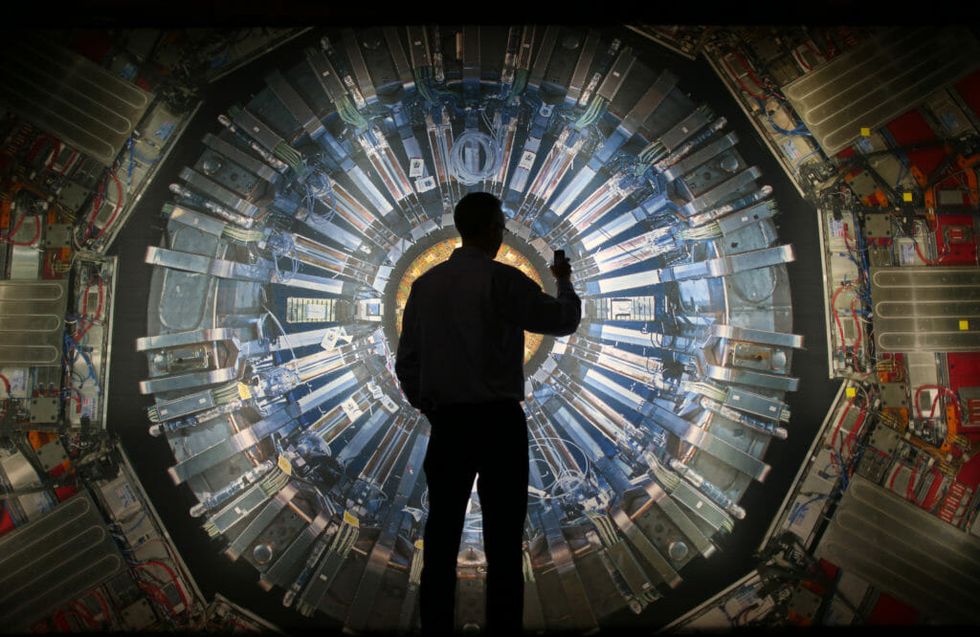 at the Science Museum's 'Collider' exhibition on November 12, 2013 in London, England. At the exhibition, which opens to the public on November 13, 2013 visitors will see a theatre, video and sound art installation and real artefacts from the Large Hadron Collider, to provide a behind-the-scenes look at the CERN particle physics laboratory in Geneva. It touches on the discovery of the Higgs boson, or God particle, the realisation of scientist Peter Higgs theory.

The scientists at CERN, the European Organization for Nuclear Research in Switzerland, are mainly concerned with smashing tiny particles together at high speeds to determine their properties and discover new, smaller particles. Online conspiracy theorists, though, have other concerns.

CERN’s Large Hadron Collider (LHC), an enormous underground loop in which large magnets accelerate particles to high speeds, is about to start another round of experiments, thereby reviving doomsday theories that have been around since the LHC’s inception. There have been several failed attempts to shut CERN down via lawsuits, hundreds of YouTube videos with millions of collective views, and a seemingly infinite number of tweets, all worried that the scientists at CERN are (knowingly or otherwise) on the brink of committing heinous crimes against nature and humanity.

One of the most popular beliefs among conspiracy theorists is that all of that atom-smashing may create a black hole which could swallow up the Earth. This fear was articulated in a 2008 lawsuit that attempted to stop the LHC before it started: “The compression of the two atoms colliding together at nearly light speed will cause an irreversible implosion, forming a miniature version of a giant black hole. […] Any matter coming into contact with it would fall into it and never be able to escape. Eventually, all of earth would fall into such growing micro-black-hole, converting earth into a medium-sized black hole, around which would continue to orbit the moon, satellites, the ISS, etc.”

It would not be possible to create a dangerous black hole using the LHC: quite simply, astronomical black holes are extremely massive. There is not enough mass or energy involved in any LHC experiment to create one. Interactions at similar energies happen all the time in the Earth’s atmosphere: if they could create dangerous black holes, we wouldn’t

be here. Even if a microscopic black hole were created, it would evaporate immediately. As Nobel Laureate Vitaly Ginzburg said, "To think that LHC particle collisions at high energies can lead to dangerous black holes is rubbish. Such rumors were spread by unqualified people seeking sensation or publicity."

Compared to some of the other fears that doomsday theorists have about CERN, the fear of black holes is tame. One group, called the Raelians, believe that life on Earth was created by scientists from another planet, and that there may be similar life forms on the tiny particles that smash together within the LHC’s loops. In their eyes, particle accelerators are tools for minuscule murders (and they are like Horton the elephant, saving their friends on the dust speck from violent extinction).

In 2015, the LHC drasticallyincreased its capability for smashing particles together. Obtainable energy levels within the collider increased by 60 percent, whipping online doomsday theorists into a frenzy. “It got to the point where there really needed to be some intervention,” said Kate Kahle, who is in charge of CERN’s social media presence. In an attempt to proactively mitigate any impact these irrational apocalyptic fears might have on confused members of the general public, CERN posted an FAQ based around them, titled “CERN answers queries from social media” but more colloquially called the “Surreal FAQ.”

This FAQ answers some of the more plausible concerns, like the idea that CERN might be causing natural disasters or affecting the Earth’s atmosphere and magnetic field, stating that “The LHC observes nature at a fundamental level but does not influence it” and that it “cannot influence the Earth’s magnetic field, nor the weather.” CERN may change our

understanding of our world, but it won’t actually change the world. On the question of whether the LHC could create an Earth-endangering black hole, CERN explains “The LHC will not generate black holes in the cosmological sense. However, some theories suggest that the formation of tiny 'quantum' black holes may be possible. The observation of such an event would be thrilling in terms of our understanding of the Universe; and would be perfectly safe.”

Conspiracy theorists afraid of CERN frequently cite religion as the basis for their particularly outlandish concerns and theories. Because CERN has a statue of Shiva, a Hindu god of destruction, on its campus, theorists questioned CERN’s religious affiliations and whether it was truly a scientific and neutral organization. They also insisted that the statue may have caused a destructive earthquake in Nepal. CERN clarified that the statue was simply a gift from India, which is one of its observer states. Sometimes, a statue is just a statue.

On the question of whether CERN’s logo features the 666 symbol of the Antichrist, the FAQ states that “The shapes in CERN’s current logo represent particle accelerators.” On why certain Google Maps searches like “6th Seal” and “1st Trumpet” that are related to the Biblical Armageddon point to CERN, it seems clear that “any of these associations have no grounding in fact”; individual users can rename locations easily as a joke or spur doomsday theories.

Comments on nearly any online article or blog post about CERN and the LHC postulate some version of “CERN is a Satanic illusion” or “all that data is whizzing through the air - Jesus called Satan ‘the master of air’” or “scientists should stay out of the realm of God, demons, and spirits” or “they’re Satanists trying to prove that God isn’t real.” One blogger claimed, “CERN is an abbreviated title for an ancient god of the underworld worshiped by the Celts, CERNNUNOS… Apollyon, Shiva, Dionysis and CERNnunos are Satan’s

representatives.” (In fact, it stands, as it always did, for Conseil Européen pour la Recherche Nucléaire - the European Organization for Nuclear Research.) To the question of whether CERN seeks to disprove the existence of God, the FAQ’s answer is a short “No.”

Theories like this, combining fanaticism with inaccuracies (and falsely attributing them to scientists), are more common than you might think, as are the people who believe them.

A surprising number of conspiracy theorists are concerned that the LHC might open a portal to another dimension and allow demons to run rampant over our world. When Kahle attempted to assuage that fear, one theorist’s response was “What is that a ‘no’ to, the portal or the demons?” Both. As the FAQ clarifies, “CERN will not open a door to another dimension. If the experiments conducted at the LHC demonstrate the existence of certain particles it could help physicists to test various theories about nature and our Universe, such as the presence of extra dimensions.” So while the experiments at the LHC could potentially reveal dimensions beyond our awareness, there’s no need to worry about demons swarming through a portal from that dimension any time soon.

The World Keeps On Turning

The Surreal FAQ has quelled the fears of some doomsday theorists: Steve Andrews, who has written several blog posts about CERN, including “The Cern Large Hadron Collider, Lord Shiva, Satan and the number 666” later updated his posts, saying “perhaps my reaction to this was wrong and born out of my distrust of science?” Of the FAQ, he more recently said that “it does work to explain the actual situation.”

Every time a conspiracy theorist changes his mind or a confused bystander finds the answers to her questions about CERN, the FAQ has done its job. The more the general

public understands about the LHC, the science it does, and the risks (or lack thereof) it poses, the better: CERN is, after all, partially publicly funded by nations and institutions around the world.

In reality, the Large Hadron Collider does play with world-record amounts of energy for a collider: it is able to smash protons together at energies of up to 13 trillion electronvolts (TeV). However intimidating that may sound, in real terms 13 TeV is not so much energy: each individual proton in the collider “has an energy comparable to that of a mosquito in flight.”

Experts in astrophysics, cosmology, general relativity, mathematics, particle physics and risk analysis agree, both personally and in peer-reviewed scientific papers, that the LHC is remarkably safe. In the words of Stephen Hawking, "The world will not come to an end when the LHC turns on. The LHC is absolutely safe. ... Collisions releasing greater energy occur millions of times a day in the earth's atmosphere and nothing terrible happens."

So, while we can expect science seeking answers to some of the great mysteries of physics and the universe, we should not worry about dangerous black holes, demons from another dimension, or a Biblical apocalypse. At least not from CERN or the LHC. As the Surreal FAQ level-headedly reminds us, they are just trying to do science. They won’t destroy the world.