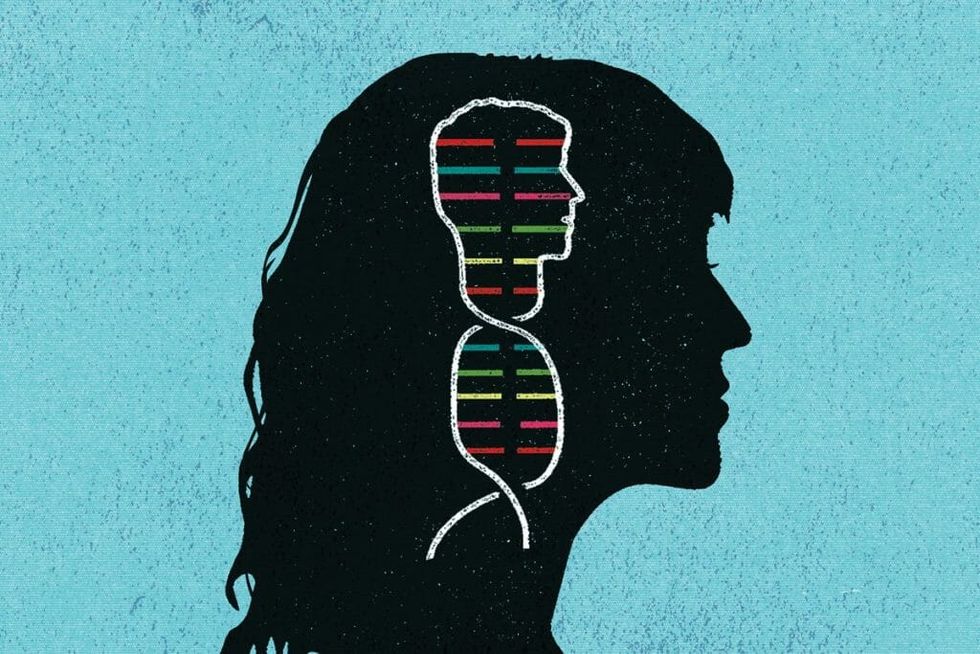 Motherhood is the gift that keeps on giving. But some of its gifts may be lethal.

Basic human biology teaches that children share cells from both their genetic contributors. But during pregnancy, however, cells not only pass from mother to embryo through the placenta, but embryonic cells walk the placental pathway back to the mother.

Science writer Nancy Shute describes this as “a silent chemical conversation throughout pregnancy, with bits of genetic material and cells passing not only from mother to child but also from child to mother. Scientists increasingly think these silent signals from the fetus may influence a mother's risk of cancer, rheumatoid arthritis and other diseases, even decades after she has given birth.”

In 1979, researchers at Stanford University discovered cells containing the male “Y” chromosome circulating in the blood of women after pregnancy. Because these cells were genetically male, they could not have been the women’s own, but most likely came from their babies during pregnancy. More recently, researchers from the National Institutes of Health reported finding male DNA in the autopsied brains of women who had borne sons, sometimes even decades ago.

Experts initially believed that, once the baby was born, any fetal cells transferred to the mother during pregnancy would clear away. But Giovanna Cruz, an epidemiologist at the University of California at Berkeley, discovered that “in a subset of women they actually persist for decades.”

This phenomenon—the harboring of a small number of cells (or DNA) that originated in a different individual—is called microchimerism. You may have cells from a variety of different sources coursing throughout your body: from your mother, from your grandmother, and—if you have ever been pregnant—from your children.

In July 2012, researchers from Tufts Medical Center published a study in Biology of Reproduction's Papers-in-Press indicating they had found cells from the placenta and fetus inside the lungs of late-term pregnant mice. While the team remained uncertain how the fetal cells were able to cross the placenta into the mother, they believed there could be "leaky spots" in the cells that form the barrier between the infant's blood and the mother's blood in the placenta in late-term pregnancy.

Dr. Lee Nelson, an autoimmunity researcher and professor of medicine at the University of Washington acknowledged the transference. “That cells cross the placenta is not surprising. After all, the tissue that connects mother and child is not an impenetrable barricade. It is more like a selective border crossing, allowing passage, for instance, of materials needed for the fetus' development.”

But Nelson went on to note,“[W]hat is remarkable, however, is the extent to which migrant cells can persist in their new host, circulating in the blood and even taking up residence in various tissues. The intermingling of some cells from one person inside the body of another… is now drawing intense scrutiny from medical researchers, because recent work suggests it may contribute to both health and disease.”

A genetic bond between parents

As we consider ourselves unique, many of us harbor cells from other people in our bodies. These cells are not merely dormant souvenirs, but may well affect the health of women in particular. Fetal cells contain genetic information from the male side of the equation, meaning that these adventurous fetal cells, “taking up residence in many organs of the body including the lung, thyroid, muscle, liver, heart, kidney and skin,” actually can pass genetic information from the father to the mother. In effect, via that brief embryonic sojourn, a child may deliver ticking time bombs for diseases that otherwise appear nowhere in the woman’s own medical or family history.

Medical specialists routinely counsel parents about genetic conditions that might pass to their children. But many are startled to learn that a father may pass on those same conditions to the mother of his children. A woman may believe herself protected from various hereditary diseases because no one in her family had ever contracted them. But she may actually be at risk for those ailments by virtue of the baby’s father’s genetic predispositions.

"Normally, the spouse would not be considered family," Cruz points out, when considering hereditary conditions that may pose a risk.  But experts now understand that creating a child together may put the woman at risk for diseases exclusively in the man’s medical history, and this could affect how doctors advise women who are planning to conceive.

Dr. Diana Bianchi, lead author of the Tufts study, predicts "implications for the future health of women who are or have previously been pregnant."

Effects of the microchimeric cells

Scientists investigating fetal microchimerism first explored the cells' role in autoimmune diseases, which are much more common in women. These diseases, explains Louise McCullough, director of stroke research at the University of Connecticut Health Center, “which include rheumatoid arthritis, lupus and some thyroid conditions, occur when the body's natural defense, the immune system, begins

attacking the body as if it were a foreign invader.”

The mother's immune system recognizes a fetal cell left over from a previous pregnancy partly as belonging to the mother, because the fetus is genetically half identical to the mother, but partly foreign, due to the father’s genetic contribution. This may “prime” the immune system to be alert for cells that are similar to the self, but with some genetic differences.

In some circumstances, this causes the immune system to turn against the self, causing significant damage. Dr. Peter Murray, a researcher at St. Jude’s Children’s Hospital, indicates that “[i]t is thought that the… immune cells from the fetus stimulate inflammation and bring about autoimmune disease, such as in graft-versus-host disease in which immune cells from donated tissue attacks the host’s immune system.”

In the past, when tumor sites in the mother bore fetal cells, scientists were unable to determine whether these cells were helping to destroy or speed the tumor's growth.

Microchimerism tends to be more common in patients suffering from multiple sclerosis than in their healthy siblings, suggesting these migrated cells may have a detrimental role in this disease, perhaps by setting off an autoimmune attack.

In addition, women who genetically have a low risk of developing arthritis but go on to develop the disease are more likely to show microchimerism. In a study published in 2014, UC Berkeley researchers looked at over 5,000 men and women, both with and without arthritis, and learned that “regardless of a women's own genetic risk, those with the disease were twice as likely to have given birth to children who had high-risk genes — most likely passed down from the father.”

And now the good news

On the other hand, microchimeric cells might also stimulate the immune response to better fight off conditions already lurking in the woman’s own genetic makeup.

Robert Martone, a scientist at St. Jude Children's Research Hospital, notes, for example, that “[m]any more microchimeric cells are found in the blood of healthy women compared to those with breast cancer... suggesting that microchimeric cells can somehow prevent tumor formation.” In addition, fetal cells have been shown to be less common in the brains of women who had Alzheimer’s disease, suggesting they

may also be related to the health of the brain.

More recent studies suggest that fetal cells may actually protect women against certain other autoimmune disorders. These effects might be caused by the mother's immune response to the child's cells, although it is unclear how long those harms or benefits might last. “The protective effect of the cells on rheumatoid arthritis decreased over time, with no benefit seen 15 years after a woman last gave birth,” according to a study in Arthritis & Rheumatism published online March 2010.

In the 2012 Tufts Medical Center study, researchers noted some of the fetal cells discovered in the female mice were immune cells, while others looked like undefined connective tissue. The scientists posited that the fetal immune cells may ensure that the mother's immune system doesn't reject them as foreign invaders, but they were less certain about the function of the connective tissue cells. They speculated that the tissue cells might play a role in regenerating or healing the mother's tissue. In fact, fetal cells not only appear to occur on tumor sites, but have been integrated into lung tissue and maternal heart tissue.

"They are younger cells and they do appear to have different capabilities," observed Bianchi. "That's an area for future research: to determine if an undifferentiated cell from the fetus has different regenerative capability than the mother's own stem cells."

Martone suggests other ways in which the presence of these fetal cells can do some good:

“For example, fetal microchimeric cells are similar to stem cells in that they are able to become a variety of different tissues and may aid in tissue repair. One research group investigating this possibility followed the activity of fetal microchimeric cells in a mother rat after the maternal heart was injured: they discovered that the fetal cells migrated to the maternal heart and differentiated into heart cells helping to repair the damage. In animal studies, microchimeric cells were found in maternal brains where they became nerve cells, suggesting they might be functionally integrated in the brain. It is possible that the same may be true of such cells in the human brain."

Looking to the future

The link between mother and child has always been a symbiotic one, but until recently, experts believed the health risks and benefits traveled in one direction only. Now they understand that it is a two-way street, and that the genetic information of a baby—and therefore, that of the baby’s father—can directly affect the mother’s health. It remains less clear which fetal cells will make that passage, and why. This will be the next frontier in this cutting-edge field.