Could a Human-Pig Hybrid Be in our Future?

The first peer-reviewed study has been published on the creation of human-pig chimeric embryos. 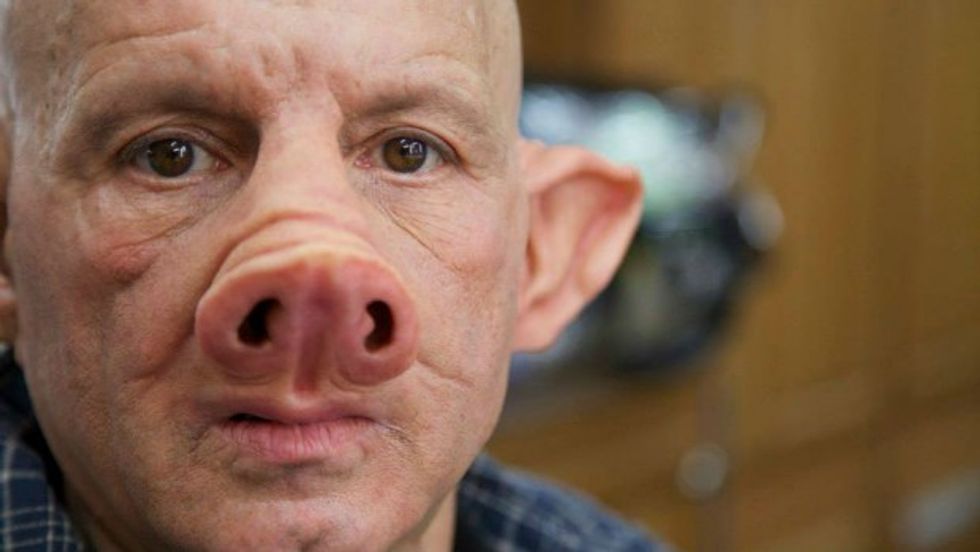 It sounds like the subplot of a science-fiction movie: pig embryos growing human organs such as hearts and pancreases, available to be transplanted into people who are terminally or chronically ill.

Turns out, it’s closer to reality than we think.

Scientists at the Salk Institute for Biological Studies in La Jolla, California, have just published the first peer-reviewed study of the cultivation of human-pig hybrid embryos.

To create the pig-human chimeras (a chimera is a single organism fusing genetic material from different species), the scientists injected human-induced pluripotent stem cells, which are cells that can become anything—from blood and nerves to skin—into more than 1,400 pig embryos. The human-induced stem cells were further modified to fluoresce a green color for easy identification.

While some of the human-induced stem cells did indeed grow, at the end of the three- to four-week development period, only 1 out of every 100,000 cells at best in the pig embryo were human,according to the study.

“I’m not surprised that the human cells don’t do particularly well in the pig embryos,”saidStephen Storm, a professor of pathology at the Karolinska Institute in Sweden who was not involved in the study. “The interspecies differences…are not insignificant hurdles to overcome to try and develop this technology further to make a whole human organ.”

However, the Salk institute’s human-pig chimera experiment was based on a more fruitful one involving rat-mouse hybrid embryos. Rat-mouse chimeraswere first successful in Japan; in 2010, scientists there were able to produce a mouse with a pancreas developed from rat pluripotent stem cells. A furtherstudypublished in late January of this year reports that researchers at the University of Tokyo were able to successfully transplant the rat-grown mouse pancreas back into the mouse. The pancreas remained functional for more than a year.

“The success of the [University of Tokyo] study is a welcome sign that the strategy can actually work,”saidJun Wu, co-author of the Salk Institute study, on the result of the transplanted pancreas. “We are very happy to see those results.”

The Salk Institute scientists’ experimentation with rat-mouse chimeras took things a step further by growing not just a pancreas with rat cells, but eyes and a heart as well. The scientists then moved on to rat-pig chimeras, which didn’t work due to the vast differences between the species, followed by human-cow. The human-cow chimeras were indeed able to grow human cells, but the researchers ultimately decided to switch to pigs due to concerns over ease and cost.

Other concerns regarding the development of hybrid embryos center, unsurprisingly, on ethics. Civilians and experts alike have raised significant alarm over the intermingling of human genetic material with that of other species, especially when it comes to the slim but real potential of human cells developing in another organism’s brain or reproductive system.

“If you have pigs with partly human brains, you would have animals that might actually have consciousness like a human. It might have human-type needs. We don’t really know,” said Stuart Newman, a professor of cell biology and anatomy at New York Medical College, who is not involved in the work.

However, given that 22 Americans die every day while waiting for an organ transplant, others argue that the potential of a sustainable supply of new organs for sick and injured people outweighs any admittedly small risk of rogue cells ending up in critical areas of a chimera.

“In ancient civilizations, chimeras were associated with God,” said Wu, the Salk study co-author; they believed “the chimeric form can guard humans.” Which is exactly what the scientists hope their embryos will someday be able to do.