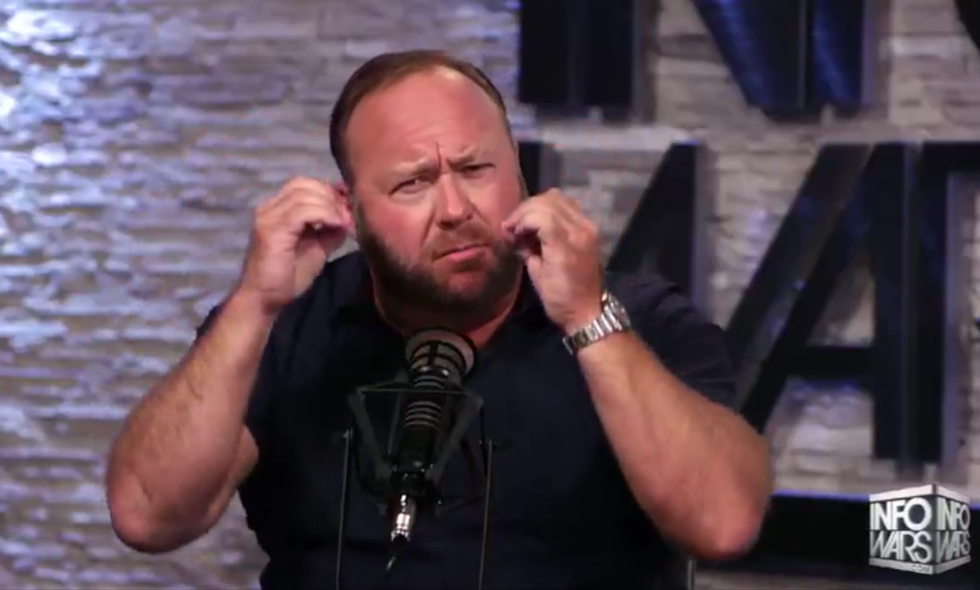 This 4th of July, many people in the United States plan to attend parades, gather for a family Bar-B-Q, possibly see some fireworks.

And if you're a Democrat? You'll take part in the Civil War Democrats have planned for that day.

If you didn't receive your invitation, don't worry. Neither did any other sane individual in the Democratic Party.

In his latest bid for relevance and publicity, right-wing conspiracy theorist Alex Jones posted several times on Twitter that "Democrats Plan To Launch Civil War On July 4th." He even pinned one to his Twitter profile.

Also included in the pinned post is video from his program Info Wars.

Coincidentally, Jones sells survival gear (and other products perfect for surviving the apocalypses he frequently predicts) on his website, as well as other items he hocks during his videos.

It's almost as if the entire thing were a stunt to get people to watch his videos and buy his products.

Jones is currently being sued by several victims of his outrageous claims, like the parents of the children murdered during the mass shooting at Sandy Hook Elementary School in Newtown, Connecticut.

For years Jones has gone on his program and made accusations against the victims and their families, claiming the shooting was a hoax and no one died. Jones' easily disproven theories led the families to be harassed and targeted by those unable to distinguish lies from truth.

So Jones' latest claim, that Democrats have a Civil War penciled in for the 4th of July, is receiving all of the respect it deserves online.

I hope this guy gets sued to a point where he has literally zero money and has to sell his blood and they won’t acc… https://t.co/1ESo3nNqVQ
— Ike Barinholtz (@Ike Barinholtz) 1530489697.0

But many? Many just found it amusingly idiotic and mocked it accordingly.

@HoarseWisperer @RealAlexJones Won’t we be spread to thin to fight a civil war if we’re stiil waging a war on Christmas?
— GuinnessDog (@GuinnessDog) 1530493222.0

Some even managed a swipe at Kellyanne Conway for her fictitious "Bowling Green Massacre."

Most found plenty to mock in various statements made by Jones and the Trump administration...

...and including a dig at a certain EPA head with bad spending habits.

Some questioned how Jones could constantly refer to Democrats and liberals as pansies while claiming they were dangerous. Luckily, someone had the answer.

However, as entertaining as mocking Jones' latest absurd claim is, some also pointed out how false conspiracy theories can be dangerous.

@tonyposnanski @veritasbyvino @RealAlexJones I reported his abusive tweet. He has three others in the last 10 sayin… https://t.co/uTVfM8L35S
— John Young (@John Young) 1530528707.0

So for anyone who might be confused, there is no Democrat planned Civil War slated for the 4th of July. Just enjoy your food and beverage of choice and stay safe around the fireworks.