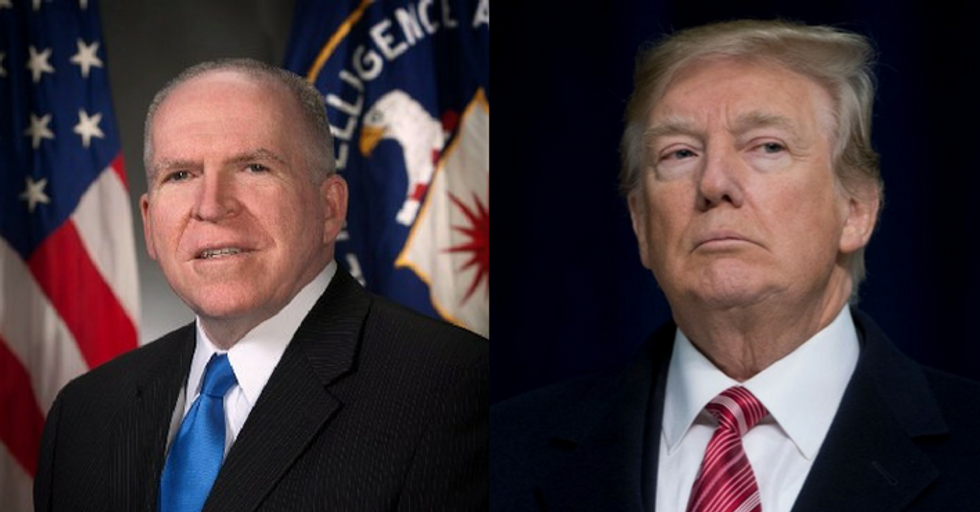 Former CIA Director John Brennan blasted President Donald Trump for revoking his security clearance in a fiery Op-Ed in Thursday's New York Times. Trump yanked Brennan's credentials on Wednesday as a purely political retaliatory move - what Brennan calls an "attempt to scare into silence others who might dare to challenge him."

Brennan, who ran the CIA from March 2013 to January 2017, has been an outspoken critic of Trump and his connections to Russia.

In his New York Times oped, Brennan explains that western democracies have been vulnerable to Russian influence because many of the major players are "readily manipulated, wittingly and unwittingly, or even bought outright by Russian intelligence operatives."

"The very freedoms and liberties that liberal Western democracies cherish and that autocracies fear have been exploited by Russian intelligence services not only to collect sensitive information but also to distribute propaganda and disinformation," Brennan said, "increasingly via the growing number of social media platforms."

Brennan wrote that Russia's "ability to work surreptitiously within the United States" manifests through "cultivating relationships with individuals who wield actual or potential power," specifically focusing on "gullible or unprincipled individuals who become pliant in the hands of their Russian puppet masters."

Too often, those puppets are found.

Brennan said that by the summer of 2016, he and then-FBI Director James Comey "knew that Russian intelligence services would do all they could to achieve their objectives," which was a concerted effort to "undermine public faith in the American democratic process" and "harm the electability of the Democratic candidate, Hillary Clinton, and show preference for Mr. Trump."

Brennan then said that based on the "highly suspicious dalliances of some American citizens with people affiliated with the Russian intelligence services," there is only one inescapable conclusion.

Mr. Trump’s claims of no collusion are, in a word, hogwash.

The extent of Trump's entanglement with Russia, whether "collusion" constitutes a crime such as conspiracy, and whether Trump obstructed justice to cover up said conspiracy, are the "questions that remain" to be answered, Brennan said.

Brennan also wants to know how many members of “Trump Incorporated," like Trump's former campaign chair Paul Manafort and his deputy Rick Gates, "attempted to defraud the government by laundering and concealing the movement of money into their pockets."

Brennan called this "an attempt to scare into silence others who might dare to challenge him."

Social media defended Brennan and his criticisms of Trump.

Brennan is not afraid of Trump.