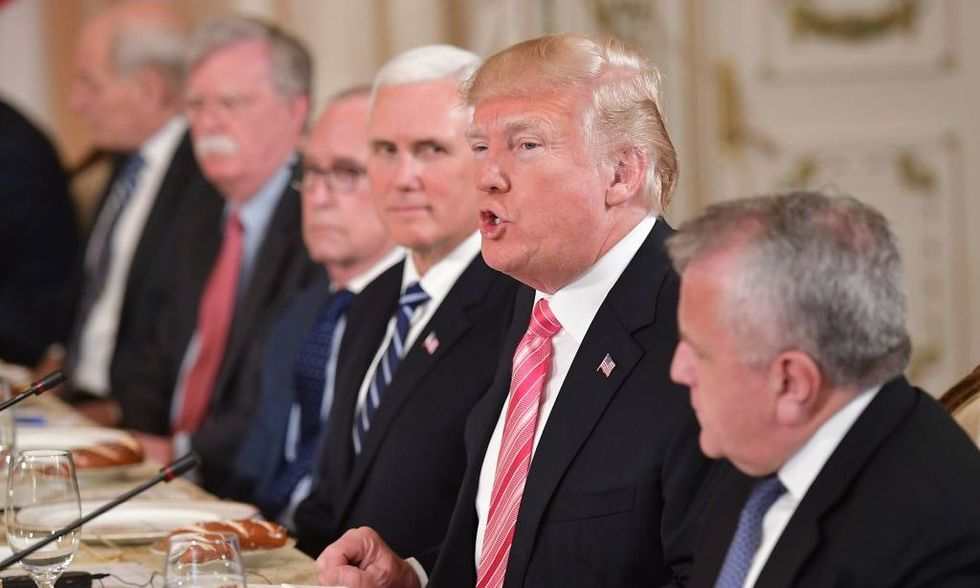 US President Donald Trump speaks during a working lunch flanked by members of his staff at Mar-a-Lago estate in Palm Beach, Florida on April 18, 2018. (Photo by MANDEL NGAN/AFP/Getty Images)

On Wednesday, September 5, The New York Times published an anonymous opinion piece, or OpEd, that claimed members of the Trump administration acted on behalf of the United States as members of the resistance. The Times only identified the writer as a senior member of the administration for whom revealing their identity would jeopardize their job.

Since then, internet sleuths and the White House worked to figure out who it is. Lists of Trump administration staff lined up to declare "not I" before the President and the public.

On Thursday evening, WikiLeaks took to Twitter to give their take on the anonymous writer. They stated:

"Based upon our statistical analysis of the language used in the New York Times anonymous Op Ed, the author is likely to be an older (58%), conservative (92%) male (66-87%). Sources should protect themselves by consulting 'adverserial [sic] stylometry' and 'forensic author profiling'."

Based upon our statistical analysis of the language used in the New York Times anonymous Op Ed, the author is likel… https://t.co/DQMnIgw2Az
— WikiLeaks (@WikiLeaks) 1536284974.0

However, the Twittersphere quickly pointed out that the demographic WikiLeaks pointed to is the same demographic of the majority of the President's staff.

@wikileaks Based on my statistical analysis of the language used in this tweet, @wikileaks is likely to be self-agg… https://t.co/3nfiHNwiPi
— Ω CallanDC (@Ω CallanDC) 1536304360.0

Without statistical analysis of language, a review of White House and Trump administration senior staff photos would also give an identical analysis.

Perhaps their message would fare better if prefaced with "Not to state the obvious, but...."

@wikileaks Great profiling! I expected it to be a young, black female with a girlfriend and membership in the Comm… https://t.co/syP3wwHlC5
— Robert Lee (@Robert Lee) 1536288587.0

@wikileaks Based upon our statistical analysis of the language used in this tweet, the author is likely to be a Cap… https://t.co/uu4wqxwMUR
— Morten Øverbye (@Morten Øverbye) 1536307944.0

@wikileaks Seriously? It took fancy analytics to determine it was an older conservative male? You just described the administration ...
— David Golden (@David Golden) 1536286238.0

But what about that colorful graphic?

The Twitter profile "Alt-Immigration" tracked it down and provided a better image. They expressed their displeasure with the use of the seemingly random graphic rather eloquently.

It is colorful though.

Meanwhile, others provided their own guesses for the identity of the mystery writer.

Sometimes with colorful graphics of their own.