Nikki Haley Just Resigned As Trump's UN Ambassador, and People Think Ivanka Is Going to Be Trump's Pick to Replace Her 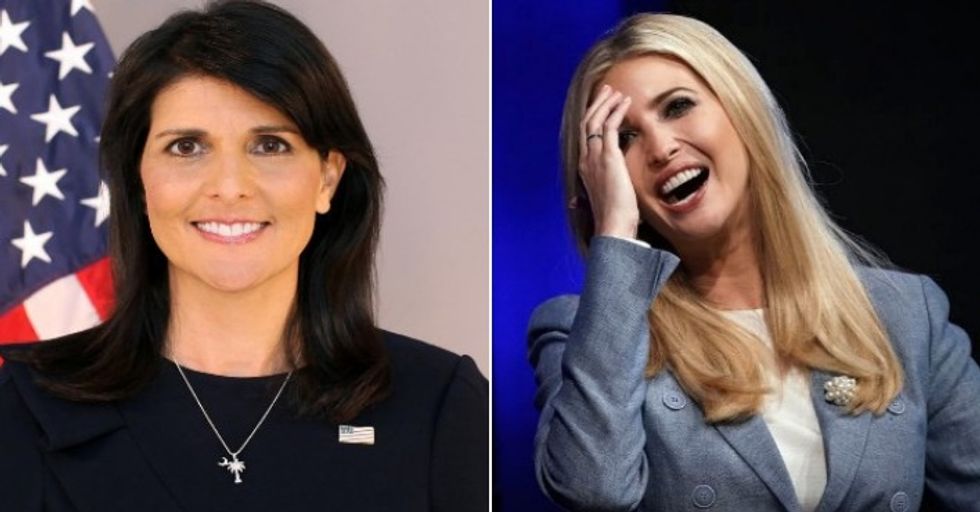 *this story has been updated, see end for latest information

A little before 10:30am EST, both President Donald Trump and White House Press Secretary Sarah Sanders teased of big news to come from the Oval Office.

They took to Twitter to inform the public. President Trump posted:

"Big announcement with my friend Ambassador Nikki Haley in the Oval Office at 10:30am."

President Trump and Ambassador Nikki Haley will meet in the Oval Office at 10:30am this morning. This event will be open to the pool.
— Stephanie Grisham (@Stephanie Grisham) 1539094329.0

The announcement? United Nations Ambassador and former Republican Governor of South Carolina, Nikki Haley will leave her position at the UN in December.

However one portion of Haley's remarks drew more attention than others from people speculating about the latest departure from the Trump administration. Haley gave effusive praise to Jared Kushner and Ivanka Trump and people think that means something.

Nikki Haley thanks Ivanka Trump and Jared Kushner, says they "do a lot of things behind the scenes that I wish more… https://t.co/sp6TeMA7FH
— Evan McMurry (@Evan McMurry) 1539098537.0

So why the speculation?

That coincidence led some to speculate on Haley's UN replacement.

People quickly picked up the theory, but few gave ringing endorsements for a UN ambassador post for Trump's eldest daughter with ex-wife Ivana.

Ivanka Trump to replace Nikki Haley? Would just prove you can buy ANYTHING in the Trump administration. https://t.co/7725nFfMiq
— NannyKat (@NannyKat) 1539106718.0

However some predicted an even larger shuffle on tap.

Many speculated that South Carolina Republican Senator Lindsey Graham's vociferous, rancorous defense of Trump's SCOTUS nominee and frequent mentions of his being a former prosecutor were an audition for Jeff Sessions job as Attorney General. Meaning someone from South Carolina might be needed to fill a vacated GOP Senate seat.

While others pointed out Haley's specific praise of the President's son-in-law's negotiating skills.

People speculated that it might be Jared Kushner, not Ivanka Trump who heads to the UN to replace Nikki Haley.

@washingtonpost Here’s my guess: Jeff Sessions will be fired and replaced by Lindsey Graham. Haley will be appointe… https://t.co/JHjORDaOmZ
— Deb (@Deb) 1539107411.0

Ambassador Haley has served America with dignity + distinction. She is a bold reformer and has been an unwavering… https://t.co/LBPbDmrKA5
— Ivanka Trump (@Ivanka Trump) 1539099192.0

And a little before 5:30pm EST, Ivanka Trump cleared up rumors stating she would not be headed to the UN.

It is an honor to serve in the White House alongside so many great colleagues and I know that the President will no… https://t.co/bzrBDAobCi
— Ivanka Trump (@Ivanka Trump) 1539120451.0

Haley is not schedule to leave her position at the UN until December.