Donald Trump Paid Nikki Haley a Questionable Compliment in Their Oval Office Meeting, and Now Women Are Dragging Him Hard 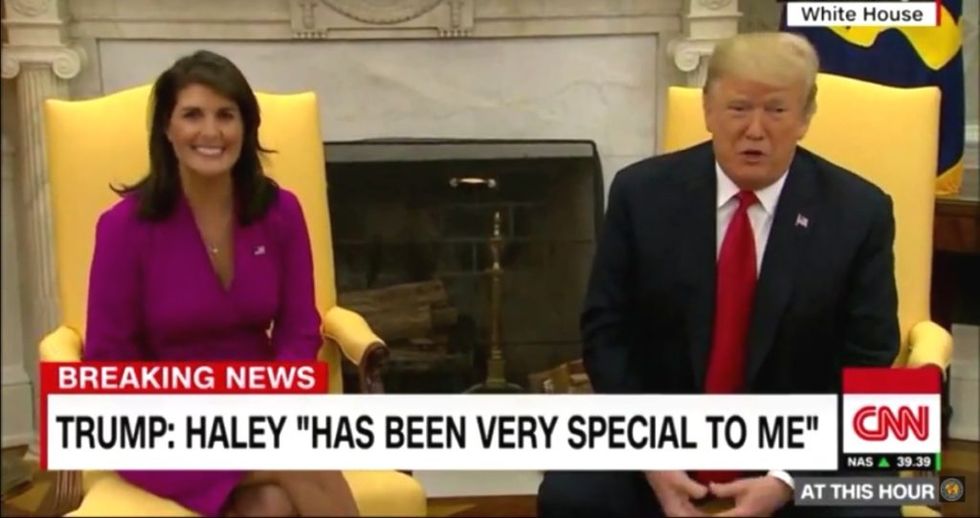 During his announcement of the pending resignation of United Nations ambassador Nikki Haley, President Donald Trump naturally praised her as he has done with all of the people who left his administration.

Trump focused on how friendly and likable Haley was at the UN. She "got to know all the players" according to the President.

But one compliment Trump paid to Haley is rubbing people the wrong way. When asked about Haley's successor, the President said many people wanted the job. Then he stated:

"I think she's helped make it a much better position, if you want to know the truth. I think it's become maybe a more glamorous position than it was two years ago."

"Maybe, I wonder why, but it is. I mean, she's made it a very glamorous position"

People picked up on the disparity of Haley's exit versus those of other administration officials of similar rank. Trump did not mention how glamorous Scott Pruitt made the EPA.

@joshtpm @realDonaldTrump Why “glamorous?” Because Haley is female? As a professional I’m sure she brought commitme… https://t.co/62Iacp8Vie
— Rene Carvajal (@Rene Carvajal) 1539104570.0

@joshtpm Glamorous? It's the freaking UN Ambassador position. When was it decided that it needed to be glamorous?
— Mary Rutledge (@Mary Rutledge) 1539103008.0

@msufans5 @joshtpm Welcome to trumpworld. Are you new here. Women are here to make things pretty and distract from… https://t.co/BilR47eANk
— andsoitgoes (@andsoitgoes) 1539105409.0

Some recalled another UN ambassador.

People were not pleased with an assessment of a woman's job performance being boiled down to how friendly she was and how glamorous she made the position.

Both men and women responded negatively to the assessment.

.@realDonaldTrump says Nikki Haley made the job of UN Ambassador more glamorous. Why? Because she is a woman? Becau… https://t.co/bfQhYj3jLb
— Patti Solis Doyle (@Patti Solis Doyle) 1539099090.0

Although some thought there may have been a specific reason for portraying the position as more glamorous after Haley. Although Ivanka Trump effectively stuck a pin in these rumors Tuesday evening.

But most people just did not like the reference to Haley's appearance over her intelligence or other compliments related to her job performance. Being pretty or glamorous is not a job requirement for a UN ambassador and does not relate to how well Haley may have done her job.

@Acosta Wow. It’s amazing how he can weave misogyny into virtually every circumstance.
— TNWorkingMom 📢 (@TNWorkingMom 📢) 1539098756.0

Haley is slated to leave at the end of December. No successor has been named.