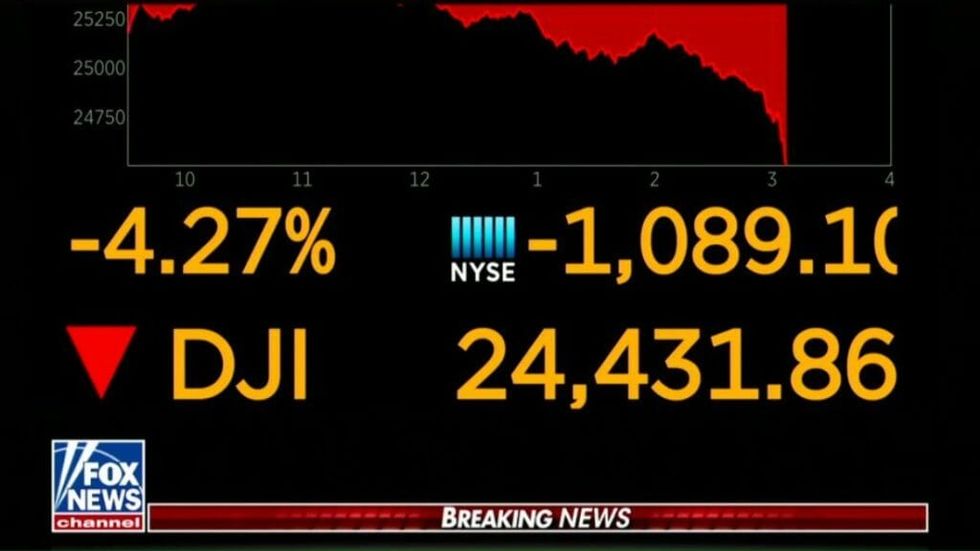 President Donald Trump traveled to Ohio Monday to deliver a speech about the Republican tax cuts, touting economic gains under his administration, and Fox News followed to cover it live. But during his speech, Fox cut away for an important announcement.

Trump stated during his State of the Union speech on Tuesday that the New York Stock Exchange (NYSE) continually set records under his presidency. The president frequently focuses on stock market performance as a sign of his success. However most Americans have no investments in the stock market.

The Stock Market has been creating tremendous benefits for our country in the form of not only Record Setting Stock… https://t.co/ztq2hDJ7rr
— Donald J. Trump (@Donald J. Trump) 1515357733.0

However this latest record, a historic drop, does not fit Trump's narrative of unparalleled economic success since he took office. And the announcement by Fox News, preempting his speech, came at the least opportune time.

The president stated the GOP tax cuts “set off a tidal wave of good news that continues to grow every single day.” But while he made that statement, banners and pop-ups on Fox News reported the stock market steadily dropping.

The stock market already plunged 666 points on Friday. Trump, while speaking of economic gains Monday in Ohio, failed to mention anything about the stock market.

It remains to be seen if Donald Trump or Fox News will attribute the stock market plunge to the GOP tax plan or the Trump administration in the manner they assigned credit for all gains.

No matter what happens with the stock market, can we all agree it's reckless and irresponsible for a president of t… https://t.co/1Nq4koDtru
— Keith Boykin (@Keith Boykin) 1517929343.0

Good time to recall that in the previous administration, we NEVER boasted about the stock market -- even though the… https://t.co/x6cTzMeOZN
— Jay Carney (@Jay Carney) 1517860216.0