Six Years After Fukushima, A Robot May Have Finally Located the Reactor’s Long-Lost Nuclear Fuel

For the first time since the disaster, we have a picture of what happened to Fukushima’s missing uranium. 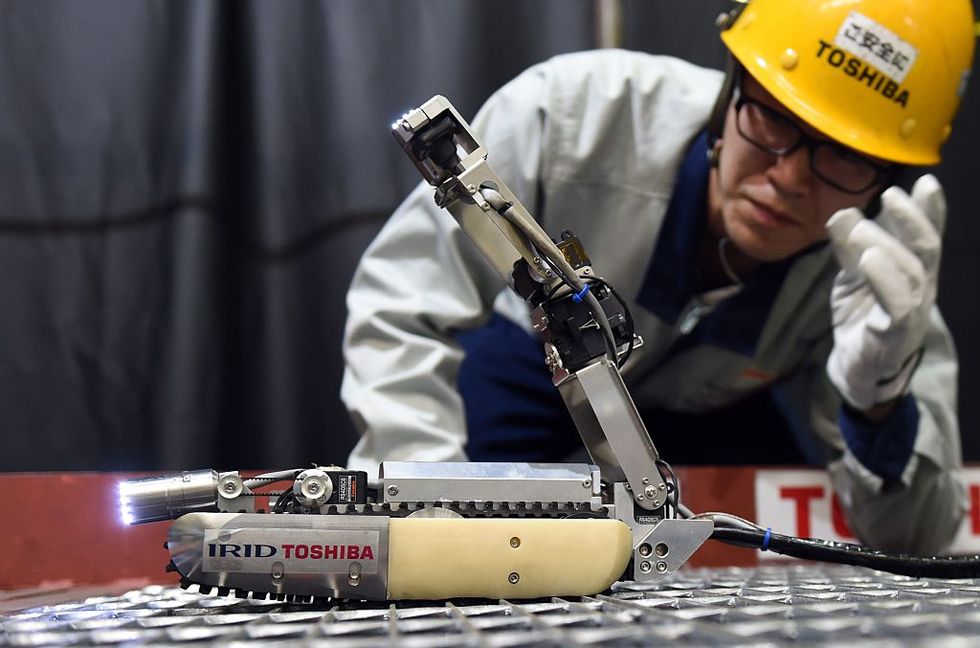 A Toshiba engineer watches a small robot with two CCD cameras developed by Toshiba Corporation and the International Research Institute for nuclear Decommissioning (IRID) moving during its press preview at a Toshiba factory in Yokohama on June 30, 2015. (TOSHIFUMI KITAMURA/AFP/Getty Images)

A robot swimming through a decrepit Fukushima reactor has captured images of what might be solidified uranium — the first images of radioactive fuel since the disaster that crippled the plant six years ago.

In March 2011, a massive tsunami triggered a meltdown at Japan’s Fukushima Daiichi nuclear power plant, causing the cores of three nuclear reactors to overheat and melt, pouring out red-hot liquid uranium. This melted fuel burned through layers of concrete and steel before settling 20 feet below the radioactive water that flooded the reactors.

Tokyo Electric Power Company (TEPCO), the plant’s owners, had previously sent robots to scope out where the uranium had landed. Each time, the robot broke down after being fried by high radiation levels or crushed by debris.

Finally, one survived an excursion into the toxic waters flooding the defunct Unit 3 reactor. The remote-controlled robot, nicknamed “Little Sunfish,” first began plumbing the reactors’ depths this past July. Roughly football-sized, it swims around using five propellers and records its surroundings using two cameras mounted to its front and back.

Little Sunfish spent three days slowly swimming through the wreckage to reach the reactor. On arrival, it beamed back a video of its surroundings: a giant hole was ripped into the reactor’s side, and clumps of brown, lava-like rocks clumped on the ground around it.

Experts believe these rocks might be our first glimpse at the melted uranium fuel from the Fukushima disaster. The fuel, they say, combined with metallic debris before cooling and hardening into these rock-like formations.

In a statement to the Japan Times, TEPCO spokesman Takahiro Kimoto said that “there is a high possibility that the solidified objects are mixtures of melted metal and fuel that fell from the vessel,” and it would take time to analyze which portions of the rocks were fuel.

The robot’s cameras didn’t just capture useful information about the fuel inside the reactor — it also captured images of extensive damage caused by the core meltdown.  This damage is just one of many barriers keeping experts from removing the melted fuel and dismantling the plant; a feat that will take several decades and cost billions of dollars.

“It’s still just the beginning of the decommissioning. There is still a long way to go, including developing the necessary technology,” Kimoto told ABC News. “But it’s a big step forward.”