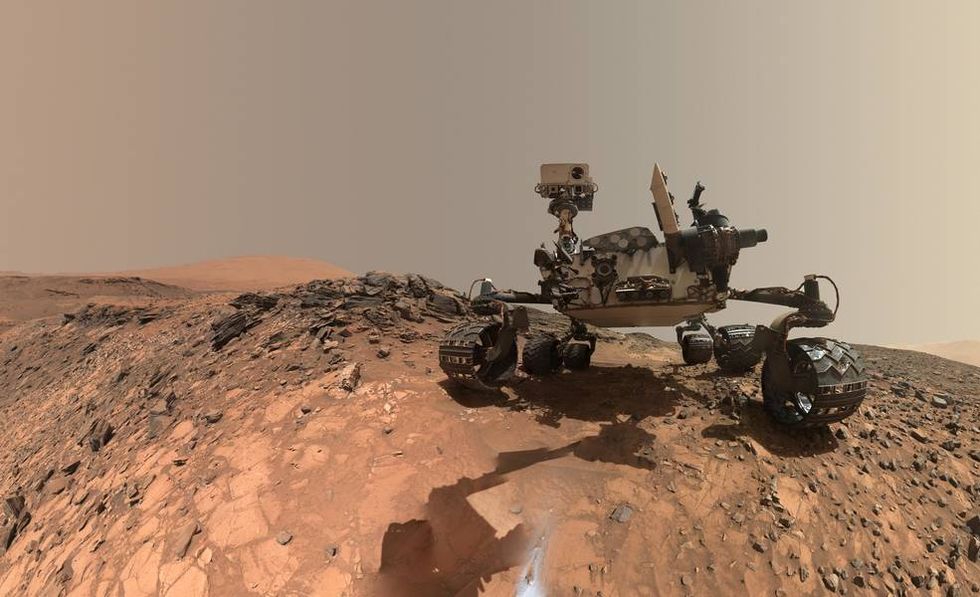 This low-angle self-portrait of NASA's Curiosity Mars rover shows the vehicle at the site from which it reached down to drill into a rock target called "Buckskin" on lower Mount Sharp. (Credits: NASA/JPL-Caltech/MSSS)

NASA’s Curiosity Rover has made a fascinating discovery on Mars:preserved organic matter. The sulfur-rich material was found along the bottom of a long-dry lake, and supports the possibility that life could exist, or may once have existed, on our second closest celestial neighbor.

While not itself evidence of life, the material found in the lake bed does containthe building blocks of life, deposited some 3 billion years ago. But everything else about it is still in question. For one, how did it get there? It could be the natural result of the rock formation process, or it could have been deposited by a meteorite, like the one that formed the lake. Or it could be the result of biological processes within the lake, or in rivers that fed the lake. NASA expert Jennifer Eigenbrode says that it’s too soon to determine where the deposits came from, but it’s a promising starting point for future research.

“While we don’t know the source of the material, the amazing consistency of the results makes me think we have a slam-dunk signal for organics on Mars,” Eigenbrode added. “It is not telling us that life was there, but it is saying that everything organisms really needed to live in that kind of environment, all of that was there.”

The discovery also further confirms the long-held suspicion that Mars was once home to liquid water. Due to low atmospheric pressure, liquid water can no longer remain on Mars’s surface for any length of time. But both of the Red Planet’s poles are covered in ice, and large quantities of water ice may be trapped in Mars’s cryosphere. Elsewhere, the plant’s surface is marked by outflow channels, suggesting ancient rivers — some of which are estimated to be just a few million years old. But the presence of water is itself not a marker of life; it’s just another building block that would have made life possible.

While commonly associated with life, organic molecules — which contain carbon and hydrogen and may also include oxygen, nitrogen, and other elements — can also be created by non-biological processes and are not necessarily indicators of life.

Other than Mars, evidence of liquid water has been found on Jupiter’s moon, Europa, and on Saturn’s moon, Enceladus. NASA continues to study both moons for signs of life. Another target is Titan, Saturn’s largest moon, which may behome to methane-based life forms.

Methane is the simplest organic molecule, and its discovery on Mars (in seasonal plumes, expelled from beneath the planet’s surface) was an earlier encouragement to continue searching for signs of current or ancient life on the planet closest to Earth.

“With these new findings, Mars is telling us to stay the course and keep searching for evidence of life,”said Thomas Zurbuchen, associate administrator for the Science Mission Directorate at NASA headquarters in Washington. “I’m confident that our ongoing and planned missions will unlock even more breathtaking discoveries on the Red Planet.”