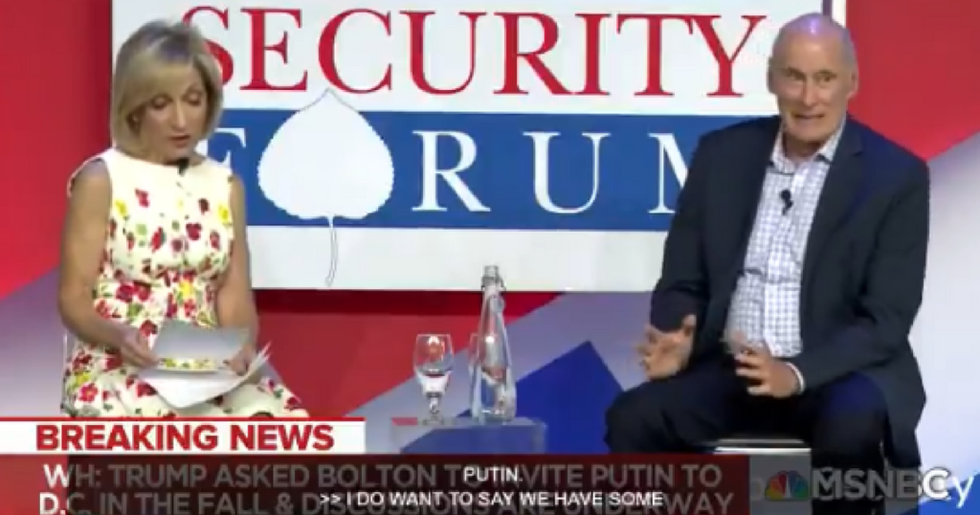 Thursday was day three of damage control after President Donald Trump's meeting with Russian President Vladimir Putin, so when Director of National Intelligence Dan Coats found out Trump had extended a White House invitation to Putin, all he could do was laugh.

Coats was on stage at the annual Aspen National Security Forum when MSNBC's Andrea Mitchell interrupted their interview with some breaking news.

“Say that again?” Coats replied as he squirmed uncomfortably in his chair. Laughter erupted in the audience as the two appeared too stunned to process what they had just learned.

Mitchell: “Vladimir Putin, coming to the…”

White House Press Secretary Sarah Huckabee Sanders tweeted that Trump had asked National Security Advisor John Bolton "to invite President Putin to Washington in the fall" and that "those discussions are already underway."

Social media went off like a nuclear bomb, much like the nukes Russia announced they had begun testing following the Trump-Putin... meeting? summit? secret club initiation? in Helsinki on Monday.

@DeadlineWH @mitchellreports Is he coming for a walkthrough, or is he expected to take possession of the property at that time?
— Shawn Posey (@Shawn Posey) 1532049757.0

Rumors began to fly that Putin's visit may coincide with Trump's desired military parade, and honestly, would anyone be surprised?

The White House responded on Thursday night as well, saying staffers were in an "uproar" because Coats was "laughing at the president."

The news of Trump's invitation to Putin broke almost immediately after Coats told Mitchell he had no idea what Trump and Putin discussed in Helsinki.

“I don’t know what happened in that meeting,” Coats told Mitchell.

“If he had asked me how that ought to be conducted, I would have suggested a different way," Coats added. "But that’s not my role; that’s not my job. So, it is what it is.”

Coats being kept in the dark about what decisions Trump is making affecting our national security also drew the attention of the Twitterverse. The lack of respect Trump has for his intelligence officials is remarkable.

It's been a whirlwind week for the president and the American intelligence community. The press conference Trump held with Putin after their one-on-one in Finland was peak Trump. White House officials said it was "very much counter to the plan."

Trump then sided with Putin, who the president said was “strong and powerful in his denial" about Russia's attack on the 2016 presidential election.

The next day, Trump said he misspoke and meant to say "I don’t see any reason why it wouldn't be" Russia, but the damage had already been done.