The Lights In the White House Went Out Right As Donald Trump Was Walking Back His Helsinki Comments, and the Internet Can't Believe Its Luck 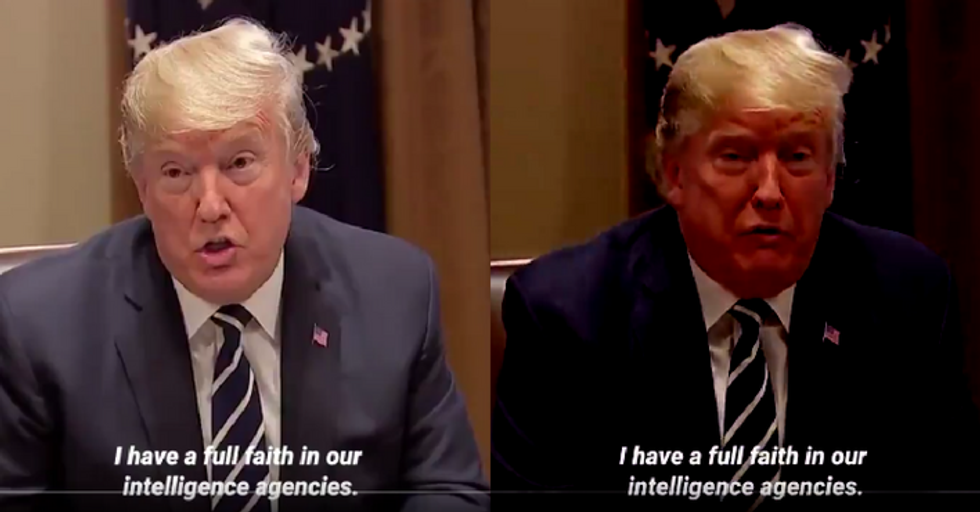 Lights begin to dim at the White House as President Donald Trump speaks to the press about insults leveled at U.S. intelligence agencies. (@JordanUhl/Twitter)

Tuesday, President Donald Trump attempted to walk back his disparaging remarks—both on Twitter Sunday and in Helsinki Monday—about the United States in general and U.S. intelligence agencies in particular.

But after stating he had "a full faith in our intelligence agencies," the lights at the White House dimmed and then went out.

Some online claim it is karmic retribution.

While others are claiming divine intervention.

Trump began by stating to the assembled reporters,

"Whoops, they just turned off the light. That must be the intelligence agencies," the President mocked.

While the cause is likely far more earthbound and electrical, Trump is by no means alone in making light of the timing of the mini-blackout.

Some of the jokes are a bit more pointed than others, however.

As @RealDonaldTrump said he has “full faith and support” in American intelligence agencies, the lights in the Cabin… https://t.co/45oNMuv1cM
— rolandsmartin (@rolandsmartin) 1531853824.0

Some pointed out the President's body language.

Others could not get over how perfectly timed that was.

@PreetBharara It took the entire cabinet to come up with this particular lie? A claim that he just misspoke, althou… https://t.co/1brGP4X54W
— 𝚓𝚞𝚜𝚝⋮ℒℯℯ𝒜𝓃𝓃 (@𝚓𝚞𝚜𝚝⋮ℒℯℯ𝒜𝓃𝓃) 1531861821.0

The lights randomly went out??? Given the timing of the comments and world events and current state of light switch… https://t.co/CuEZtqPZDk
— Gadi Schwartz (@Gadi Schwartz) 1531866138.0

Did someone accidentally lean against a switch on a wall? Was it a power failure? Do they have a lighting switch bo… https://t.co/cmT4doPt9l
— Gadi Schwartz (@Gadi Schwartz) 1531866199.0

Did anyone hear a pop? What was the president told after the press conference? Are the lights manually controlled?… https://t.co/rJRWcAaxKu
— Gadi Schwartz (@Gadi Schwartz) 1531866414.0

@TheTweetOfGod Bernie Sanders had a bird land on the podium, Trump had an eagle attack him and the lights go out on… https://t.co/tPVOI1GeON
— Luna Morgana (@Luna Morgana) 1531857812.0

Some people see a potential conspiracy...

The lights going out in the Cabinet Room during Trump saying he has faith in the intelligence communities might be… https://t.co/BjN0fSWaFg
— Lawson (@Lawson) 1531858748.0

Wouldn’t surprise me if Russia is trying to send a message or show they gained access to the US power grid
— Lawson (@Lawson) 1531858921.0

But most people just thought it was a funny coincidence begging to be made fun of.

Whether it was the result of a storm, as some claim, or someone forgot to pay the electric bill, either way the day the lights went out in Washington DC was memorable.