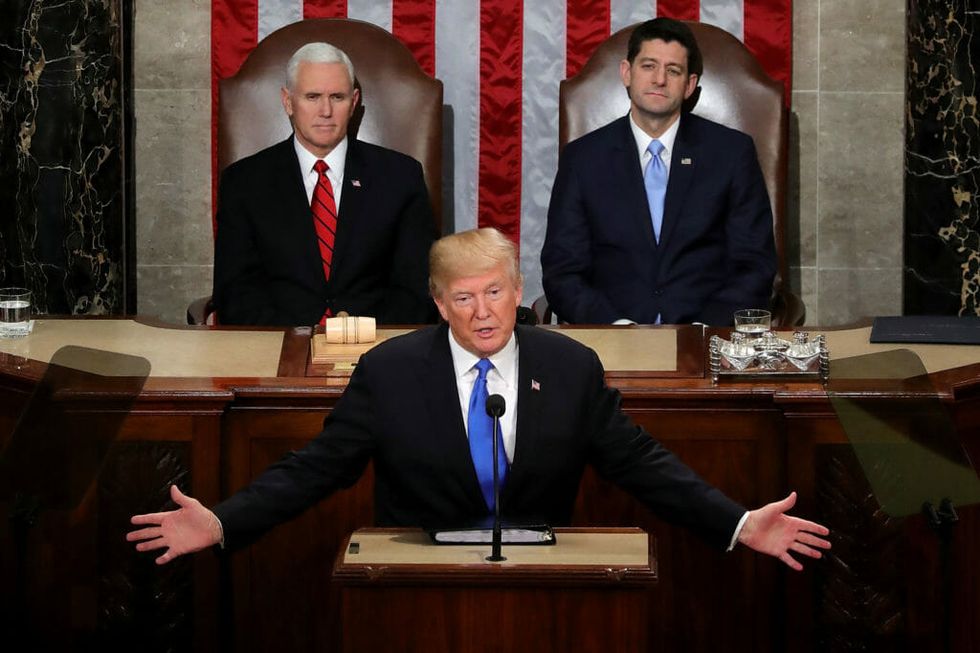 WASHINGTON, DC - JANUARY 30: U.S. President Donald J. Trump delivers the State of the Union address as U.S. Vice President Mike Pence (L) and Speaker of the House U.S. Rep. Paul Ryan (R-WI) (R) look on in the chamber of the U.S. House of Representatives January 30, 2018 in Washington, DC. This is the first State of the Union address given by U.S. President Donald Trump and his second address to a joint meeting of Congress. (Photo by Chip Somodevilla/Getty Images)

Donald Trump held his first State of the Union speech Tuesday night, and while it was previewed as a call for unity across the aisle, what we got was far more divisive, with derogatory references to immigrants and a call to pass legislation to address the rightwing "deep state" conspiracy theory.

But when The Washington Post went to press with their front page, they seemed to buy into the administration's pre-speech spin uncritically, declaring the speech "A Call For Bipartisanship."

But many wondered what speech they were watching:

@washingtonpost You guys might want to watch that new movie, The Post, and see what it looked like when you had a spine.
— Adam Schmidt (@Adam Schmidt) 1517375630.0

It appears the newspaper heard the complaints loud and clear -- or actually watched the speech -- because it wasn't long before another cover emerged.

That other one was just the "first edition" you see...

In contrast, The Washington Post's editorial board published a scathing editorial about the speech this morning that belied the optimism conveyed by both covers.

The editorial was titled:

A divisive and misleading State of the Union

And even came with a handy video:

HAVE A president’s words ever rung more hollow? In his first State of the Union address Tuesday night, President Trump spoke of “what kind of nation we are going to be. All of us, together, as one team, one people and one American family.” Yet Mr. Trump could not avoid, even for an hour, lacing his address with divisive references to hot-button issues and graceless attacks on his predecessors: to “disastrous Obamacare,” “the mistakes of past administrations,” “the era of economic surrender” and more.

The editorial in fact called out the hollowness of the notion that Trump truly was interested in bipartisanship at all:

His desire for bipartisanship has not led him to negotiate with Democrats in good-faith on health care, taxes or immigration. His search for unity did not stop him Tuesday from taking a gratuitous dig at football players who kneel during the national anthem.

And served as a much-needed fact checker:

As he took a victory lap on the economy, Mr. Trump displayed his typical indifference to the truth, claiming he “enacted the biggest tax cuts and reforms in American history.” They are not.

The editorial ended with statements of fact, ignored by the president's speech:

Mr. Trump did not mention many of the nation’s biggest, longer-term threats. The fiscal crisis, worsened by his tax bill, threatens future generations. Economic inequality is high. The world continues to warm. Russia’s meddling poses a threat to U.S. elections. Sadly, the morning after a very long speech, none of that is going to look any different.