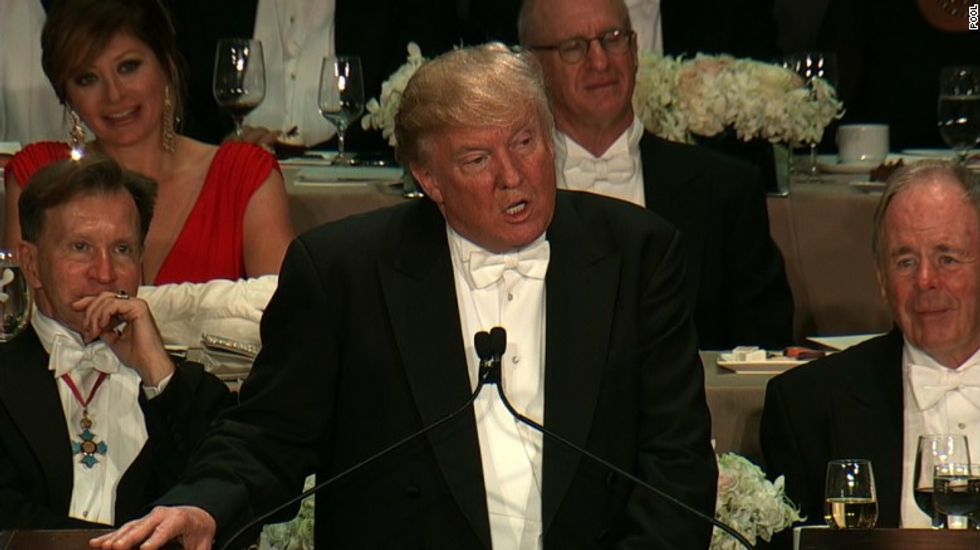 The Alfred E. Smith Memorial Foundation Dinner, a New York City-based white tie event and fundraiser for Catholic charities, is traditionally a time for presidential candidates to offer lighthearted jokes about themselves and their opponent. There was hope the event could ease tensions just 24 hours after a stormy presidential debate. Donald Trump spoke first, scoring decent laughs at the beginning of his speech.

First, the Republican presidential nominee joked about the size of his hands––and he even shook them to demonstrate their largeness.

He poked fun at his wife, Melania, and her plagiarized convention speech."Michelle Obama gives a speech and everyone loves it, it's fantastic," Trump said. "They think she's absolutely great. My wife, Melania, gives the exact same speech, and people get on her case!"

He joked about calling Hillary Clinton, his Democratic opponent, a "nasty woman" at Wednesday night's debate: "But this stuff is all relative," he said. "After listening to Hillary rattle on and on and on, I don't think so badly of Rosie O'Donnell anymore."

But when he decided to tease Clinton more sharply, the audience booed.

The crowd continued to boo Trump, and there were scattered calls for him to get off the stage. Still, he pressed on––and things went south.

Trump ignored the jeers and proceeded to wrap things up: "I don't want this evening without saying something nice about my opponent. Hillary's been in Washington a long time. She knows a lot about how government works. And according to her sworn testimony, Hillary has forgotten more things than most of us will ever, ever know. That I can tell you."

Neither candidate seemed at ease, and Clinton cut less to the bone, but when it was her turn to take the stage, she delivered. "It's amazing I'm up here after Donald. I didn't think he'd be OK with a peaceful transition of power," Clinton said, in a nod to Trump's recent allegations that the election might be rigged and that he might not accept voting results.

She also mocked Trump for his lewd comments about women: "Donald looks at the Statue of Liberty and sees a 4, maybe a 5 if she loses the torch and tablet and changes her hair."

The comment that drew the most laughter, however, was her observation on Trump's debate performance. "Sharing a stage with Donald Trump is like, well, nothing really comes to mind," Clinton said. "Donald wanted me drug tested before last night's debate. ... I am so flattered that Donald thought I used some sort of performance enhancer. Now, actually, I did. It's called preparation. And looking back, I've had to listen to Donald for three full debates, and he says I don't have any stamina!"

Reporters tweeted before the event that Trump and Clinton did not shake hands and entered from separate sides of the room. They sat one seat apart for the evening, with New York's Timothy Cardinal Dolan acting as a buffer between them. Later, Dolan called his seat the "iciest place on the planet."