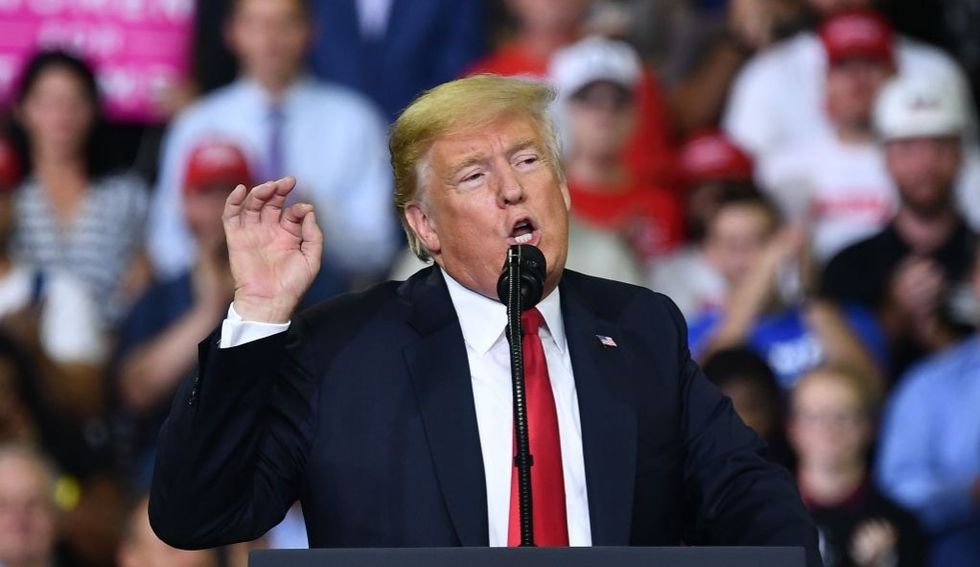 White House counselor Kellyanne Conway said on CNN earlier today that President Donald Trump was "trying to heal the country" in the wake of a mass shooting at a Pittsburgh synagogue over the weekend and a mail bomb plot.

"The president is trying to heal the country," she told reporter John Berman, further accusing Berman of "cherry picking" the president's words after Berman noted that Trump had referred to a Democrat who received a suspicious package in last week's attempted pipe bombings "a lunatic."

But the president quickly proved Conway wrong: He has often characterized the press as "the enemy of the people," and he has not let up, launching new attacks from his Twitter account.

"There is great anger in our Country caused in part by inaccurate, and even fraudulent, reporting of the news," the president said, in part, adding that the press must "stop its open & obvious hostility."

There is great anger in our Country caused in part by inaccurate, and even fraudulent, reporting of the news. The F… https://t.co/qYs0JBXHym
— Donald J. Trump (@Donald J. Trump) 1540814593.0

The president was quickly assailed for his remarks.

Less than a week after a terrorist sent bombs to journalists, Trump showed solidarity with the bomber by repeating… https://t.co/wyFUqJOs4r
— Kara & Deb (@Kara & Deb) 1540819512.0

@realDonaldTrump Trump calls the media "the enemy of the people" Trump tweeted a video of himself body slamming… https://t.co/akBYGdREtI
— Rantt Media (@Rantt Media) 1540774029.0

The president has often come under fire for his assertions that journalists are inherently dishonest. The president has often criticized news outlets for their coverage of Special Counsel Robert Mueller’s investigation into Russian interference in the 2016 presidential election. His attacks on First Amendment rights are well documented; he once infamously claimed that he would seek to amend libel laws and penalize journalists who’ve reported negative coverage about him and his associates.

Last week, the president, in a 3 AM tweet, tore into the media for allegedly “blaming” him for the attempted attacks.

The president’s critics have noted that he has not condemned these acts of violence, and that when he does, his words ring hollow The president has, to name just a few examples, called for violence against members of the press, has labeled the press “the enemy of the people,” and has repeatedly led chants at his rallies to “lock up” Hillary Clinton.

Trump did issue a statement after the Time Warner Center––where CNN’s headquarters are located––was evacuated on Wednesday. He pledged to “bring those responsible for these despicable acts to justice.” But his comments rang hollow for many who pointed out that it was just last week that the president praised Montana Representative Greg Gianforte for assaulting a reporter.

The president railed against Democrats at a White House event meant to call for unity in the wake of the arrest of Cesar Sayoc, the suspect in the string of attempted mail-bombings.

Trump began the event by characterizing the bomb scares as a series of “terrorizing acts” that are “despicable and have no place in our country.”

“We must never allow political violence to take root in America — cannot let it happen — and I am committed to doing everything in my power to stop it and to stop it now,” he added.

Minutes later, the president repeated the phrase “lock them up” about his opponents. He also attacked “globalists” who he says are working with foreign countries to “cheat” American workers.

“They’re called globalists. I like the globe too, but we have to take care of our people,” he said.

The president declined to cancel an appearance at a rally in Wisconsin last week as news of the mail bombs dominated the media. During that rally, he criticized the media as expected.

“The media also has a responsibility to set a civil tone and to stop the endless hostility and constant negative and oftentimes false attacks and stories,” he said, hours after the evacuation of the Time Warner Center. The media “can’t take a joke,” he added.