Finally someone said it. 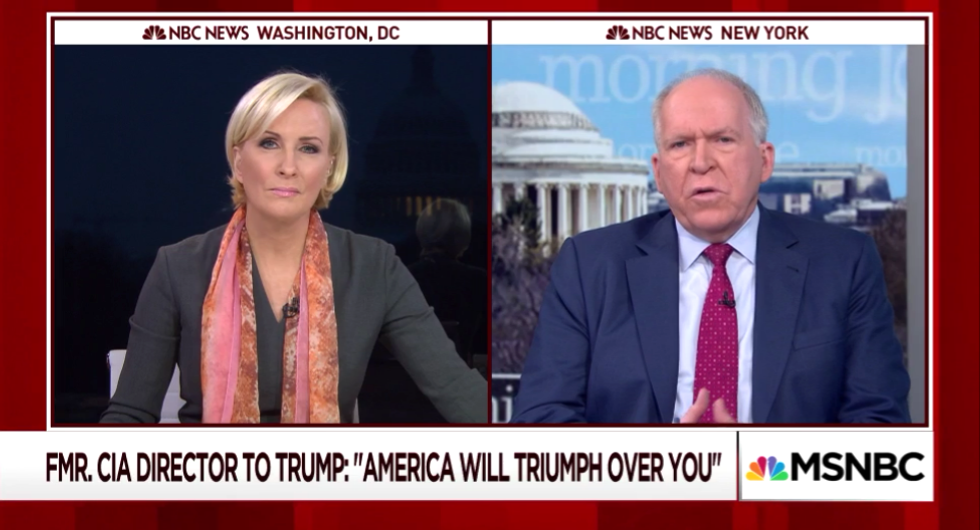 Does Russia have something on Donald Trump?

The Russians, I think, have had long experience with Mr. Trump, and may have things that they could expose.”

Brennan, who served as CIA head from March 2013 to January 2017, made the comment in response to the question of whether he thought Trump feared Russian President Vladimir Putin. He attributed the president's handling of Russia and Putin as a sign that they “may have something on him personally.”

He later clarified and reiterated the concern on a subsequent MSNBC interview.

Brennan presided over the CIA when the Steele Dossier passed into government hands for the first time. That document, a series of 17 memos compiled by a former British intelligence agent, also alleged Russia had information designed to compromise Trump.

As a government official working in national security and intelligence during that timeframe, many speculate Brennan would know if there were any truth to the allegations.

Brennan’s criticism of Trump joins the voices of many other former intelligence officials like him. Given the nature of their professions, these men rarely spoke out to criticize presidents, but now do so about Trump.

These critics served under Democrats and Republicans, such as Michael Hayden who ran both the CIA and NSA under President George W. Bush, and maintain they seek not to participate in partisan politics. According to statements they have made, it is genuine alarm about Trump’s actions, disregard for rule of law, and national security motivating them.

Mr. Hayden, in an interview with CNN, stated "John has a right to say what he says — I also have trouble explaining events with regard to the president and Russia.”

Brennan's latest critical commentary came a day after a widely panned call by President Trump, and Tweet, to Vladimir Putin for winning an election highly criticized by human rights agencies as a sham.

I called President Putin of Russia to congratulate him on his election victory (in past, Obama called him also). Th… https://t.co/GZNDtLqkop
— Donald J. Trump (@Donald J. Trump) 1521658574.0

During his tenure with the CIA, Brennan maintained a fairly low profile with the press. Since leaving office, he adopted the habit of beginning discussions with reporters by stating, “I’m not going to be an anonymous source for any stories.”

But Mr. Brennan is no stranger to Twitter since he left office. He frequently Tweets his responses to the president, Trump's Tweets or his words and actions. And he doesn't hold back there either.

Many are citing a Tweet Brennan made in response to Trump on March 17.

When the full extent of your venality, moral turpitude, and political corruption becomes known, you will take your… https://t.co/xbl1pcESbL
— John O. Brennan (@John O. Brennan) 1521288048.0

But looking at the timeline of Brennan's account, which was created in September 2017, shows a history of frustration and discontent with Donald Trump.