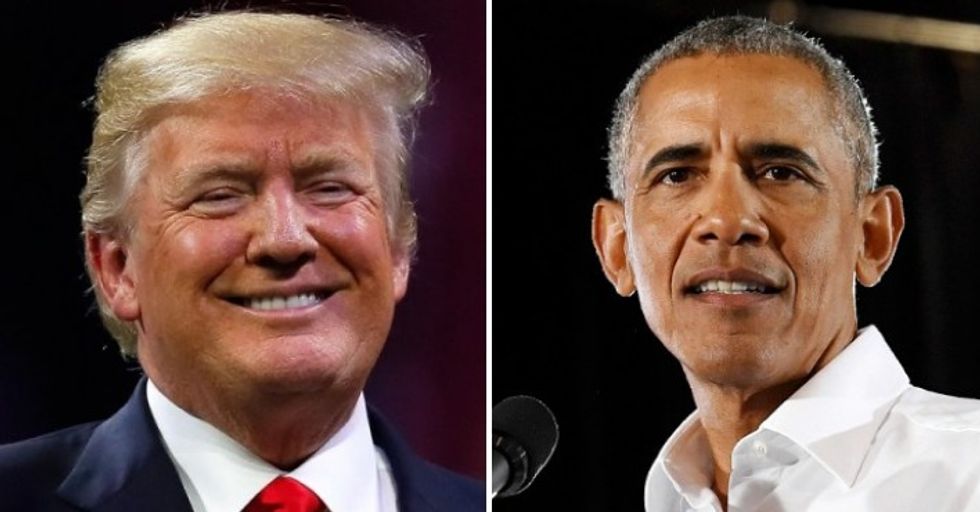 On Tuesday night, President Donald Trump took to Twitter to let his followers know he agreed with President Obama. With his tweet, he included a 2005 31 second video clip of then Senator Barack Obama.

The 44th President spoke about immigration in the clip. Then Illinois Senator Obama stated:

"We simply cannot allow people to pour into the United States undetected, undocumented, unchecked and circumventing the line of people who are waiting patiently, diligently and lawfully to become immigrants into this country."

While Trump tried to portray Obama's comments as being in line with the Trump administration and GOP's hardline immigration policy, Obama's full remarks outlined the Democratic Party's longtime official stance on immigration.

And much like the Bible, cherry-picking a few sentences from any content allows people to morph the actual message to meet their personal agenda. Love equals hate, peace equals war and sensible immigration regulations equal family separation policies.

So what was Obama talking about in Trump's out of context video clip?

The clip is a brief excerpt from a 27 minute long press conference from 2005 where Obama represented the Democrats and former Florida Republican Senator Mel Martinez represented the GOP. And while Kellyanne Conway called Obama's snippet "delicious" while she sat on the Fox & Friends couch Wednesday morning, it is doubtful she would find the 44th President's full statement quite so tasty.

Obama stated the official DNC stance in the 2005 clip Trump shared—that immigration must be regulated and managed—but then he added the other tenets of DNC immigration policy. After the Trump clip abruptly stops, Obama said:

"That’s part of the reason we need a guest worker program to replace the flood of illegals with a regulated stream of legals who enter the United States after checks and with access to labor rights."

Finally, Obama added what he deemed the most important aspect of immigration reform.

"If we hope to bring the 11 million existing undocumented workers out of the shadows into the open, we have to give them a reason. I am sympathetic, and I understand people’s frustrations with respect to those who have come here illegally, but we have to understand that they are now here, they are paying taxes, they are raising families, many of their children are U.S. citizens who were born here and are going to school here, and if we are going to get some handle on that population, then we’ve got to give them some incentive in order to come out into the open.”

"This means that we’re going to have to grant them some sort of interim legal status to work with the opportunity to eventually earn citizenship."

While the full meaning of then Senator Obama's 2005 statement eluded Trump and Conway, their agreeing 100% with the Democratic stance on immigration would simplify immigration reform that remains at a standstill for decades over partisan politics.

People were quick to point out Trump discredited his own claims about the DNC wanting "open borders" by sharing an excerpt of the DNC immigration stance.

Many spoke to the 45th President's supporters.

Some reiterated the full context of Obama's 2005 statement.

@realDonaldTrump And so do Democrats, Independents and Republicans in all states. Virtually nobody supports illegal… https://t.co/otLikhBfsM
— MyPartOfReality (@MyPartOfReality) 1540386015.0

Some saw an entirely different solution being presented by Trump for immigration reform.