Stephen Miller's Uncle Called Him Out For His 'Hypocrisy' on Immigration, And People Are Cheering 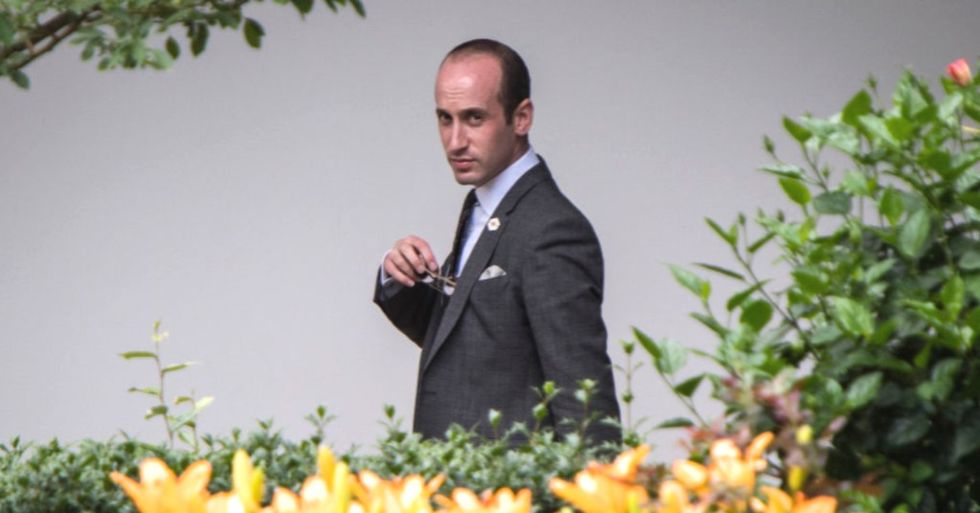 White House senior adviser on policy Stephen Miller—architect of the zero tolerance immigration policy that led to over 3,000 children being separated from their parents—can add hypocrisy to his many talents according to Dr. David Glosser. Strong words of rebuke from Glosser, but he should know Miller well since Glosser is his uncle.

Miriam's son Stephen Miller receives credit for most of the anti-immigrant and white supremacist leaning policies and statements coming out of the Trump White House. Dr. Glosser finds this to be the height of hypocrisy considering the Glosser family's own refugee and chain migration history.

In a piece for Politico Magazine, Glosser shares that story and why his nephew's actions disappoint him.

"Let me tell you a story about Stephen Miller and chain migration," Glosser introduces. "It begins at the turn of the 20th century in a dirt-floor shack in the village of Antopol, a shtetl of subsistence farmers in what is now Belarus."

Beset by violent anti-Jewish pogroms and forced childhood conscription in the Czar’s army, the patriarch of the shack, Wolf-Leib Glosser, fled a village where his forebears had lived for centuries and took his chances in America."

The obvious parallels between Stephen Miller's family story from the early 1900s and tales of refugees fleeing from violence and oppression in many forms in 2018 are undeniable.

"[Wolf-Leib Glosser] set foot on Ellis Island on January 7, 1903, with $8 to his name," Glosser continues. "Though fluent in Polish, Russian, and Yiddish he understood no English." Merit based immigration, touted by Miller and the Trump administration discourages allowing the poor or those who do not speak English fluently to enter the U.S. and apply for citizenship or refugee status.

Luckily for both Wolf-Leib Glosser and 16-year-old Friedrich Trump—who in 1885 also spoke no English and arrived with the clothes on his back—their descendents—President Donald Trump and Stephen Miller—did not determine their fates.

"Trump and my nephew both know their immigrant and refugee roots. Yet, they repeat the insults and false accusation… https://t.co/L0IuJlcHG2
— POLITICO Magazine (@POLITICO Magazine) 1534174720.0

Friedrich Trump also easily re-entered the United States in 1905. In 1904, the President's grandfather returned to Germany to make his home there. But Friedrich and his pregnant wife were unwelcome in Germany since Friedrich's emigration in 1885 helped him avoid mandatory German military service.

Another target of the Trump administration's Miller devised immigration policies is what they refer to as chain migration—a process allowing U.S. citizens or permanent residents to sponsor family members and giving them a method to become citizens. But, again, both the Glosser and Trump families benefited from just that form of entry to the United States.

"An elder son [of Wolf-Lieb Glosser], Nathan, soon followed," Dr. Glosser states pointing out one part of his family's chain migration which the Trump administration and his nephew now condemn. Unless, of course, it is related to First Lady Melania Trump's family.

The FLOTUS's unemployed parents, Viktor and Amalija Knavs left their native Slovenia with green cards sponsored by their daughter. And Stephen Miller's great-grandfather did as well.

By street corner peddling and sweat-shop toil Wolf-Leib and Nathan sent enough money home to pay off debts and buy the immediate family’s passage to America in 1906. That group included young Sam Glosser."

Sam Glosser, another direct beneficiary of chain migration, had a son named Izzy who had a daughter named Miriam who had a son she named Stephen. Over the ensuing decades, the Glosser family prospered, as did the Trump family. And both, apparently forgot their roots.

As Dr. Glosser tries to remind his nephew Stephen:

I have watched with dismay and increasing horror as my nephew, who is an educated man and well aware of his heritage, has become the architect of immigration policies that repudiate the very foundation of our family’s life in this country."

"I shudder at the thought of what would have become of the Glossers had the same policies Stephen so coolly espouses— the travel ban, the radical decrease in refugees, the separation of children from their parents, and even talk of limiting citizenship for legal immigrants— been in effect when Wolf-Leib made his desperate bid for freedom."

World events made the Glosser patriarchs bid for freedom in the United States in 1903 especially important and poignant for Miller's uncle, if not for his nephew.

Stephen Miller’s uncle: If my nephew’s ideas on immigration had been in force a century ago, our family would have… https://t.co/qAjV5OB0ez
— POLITICO (@POLITICO) 1534181412.0

"The Glossers came to the U.S. just a few years before the fear and prejudice of the “America First” nativists of the day closed U.S. borders to Jewish refugees. Had Wolf-Leib waited, his family would likely have been murdered by the Nazis along with all but seven of the 2,000 Jews who remained in Antopol."

I would encourage Stephen to ask himself if the chanting, torch-bearing Nazis of Charlottesville, whose support his boss seems to court so cavalierly, do not envision a similar fate for him."

Acting for so long in the theater of right wing politics, Stephen and Trump may have become numb to the resultant human tragedy and blind to the hypocrisy of their policy decisions."

Dr. Glosser concludes his piece with a harsh indictment of bigotry against his nephew and the Trump administration and a call for people to vote.

"Most damning is the administration's evident intent to make policy that specifically disadvantages people based on their ethnicity, country of origin, and religion. No matter what opinion is held about immigration, any government that specifically enacts law or policy on that basis must be recognized as a threat to all of us."

"Laws bereft of justice are the gateway to tyranny. Immigration reform is a complex issue that will require compassion and wisdom to bring the nation to a just solution, but the politicians who have based their political and professional identity on ethnic demonization and exclusion cannot be trusted to do so."

As free Americans, and the descendants of immigrants and refugees, we have the obligation to exercise our conscience by voting for candidates who will stand up for our highest national values and not succumb to our lowest fears."