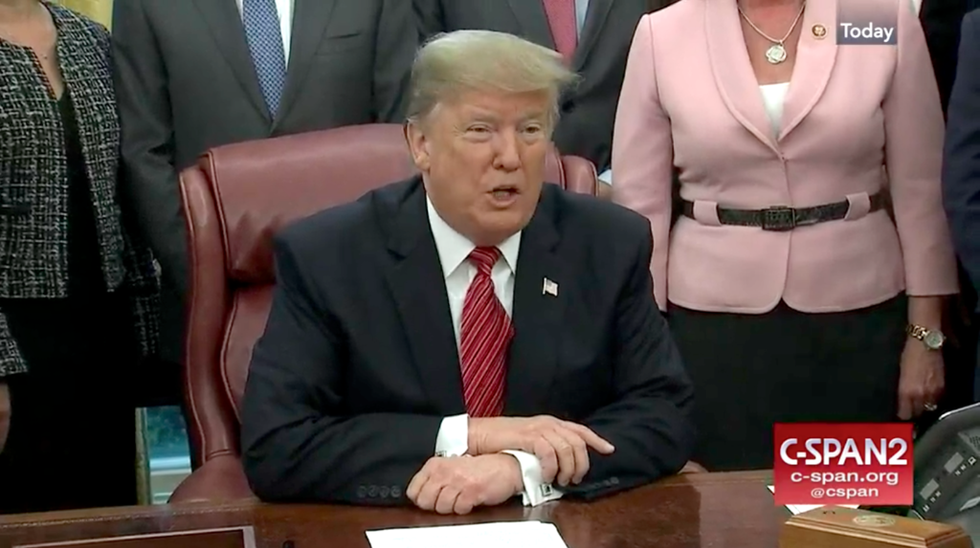 President Donald Trump speaks to reporters in the Oval Office during a bill signing January 9, 2018. (C-SPAN)

On Wednesday President Donald Trump told reporters he views a national emergency as a way to bypass an "unreasonable" Congress that refuses to acquiesce to his demands.

This misinterpretation of the proper use of a national emergency coincides with the President's ideas about using a government shutdown to force Congress to give in to his demands as well. Trump famously declared he would be proud to shut down the government if he did not get what he wanted from Congress.

Although he later decided to blame Democrats for his choice.

But authoritarian governments also use a national emergency to bypass the rights and protections of their citizens and override checks and balances. In the United States, worried that a corrupt President could exploit a national emergency, in 1976 Congress passed the National Emergencies Act.

The law passed to stop open-ended states of national emergency. It also formalized Congress' ability to provide certain checks and balances on the emergency powers of the President.

It imposes certain procedural requirements on the President when declaring a national emergency.

"I have the absolute right to do national emergency if I want."

In response, a reporter asked, "What’s your threshold for when you might make that decision?"

"My threshold will be if I can’t make a deal with people that are unreasonable."

In other words: there really is no national emergency at all.

Watch the President's remarks below:

If there were an actual national emergency, there would be no qualifier or negotiation, a fact which did not go unnoticed. Especially after the second time Trump spoke of a national emergency later the same day.

Instead of mentioning actual real world emergencies, events or situations, Trump cited only political machinations in both cases.

After a lunch with Republican congressional leaders, the President again spoke off the cuff with the press. That rarely goes will for Trump.

"If Chuck [Schumer] & Nancy [Pelosi]... if they don't agree to the fact that our country really has problems w/crime, with drugs, with a lot of other things...it's a bad issue for the Democrats."

People were quick to pick up on and call out the President's potential abuse of power.

@atrupar @realDonaldTrump Go ahead you lardass gasbag. You'll find out how many people oppose you in short order. https://t.co/UQG4RJNtu3
— Basqueing Snark (@Basqueing Snark) 1547062770.0

@RiegerReport Is that an official threshold for declaring a national emergency - that @POTUS isn't getting his way?
— Janet (@Janet) 1547057400.0

And people urged Democrats not to give in to the threats from the Oval Office.

The President did not specify a deadline for Congress giving in to his demands before he declared a national emergency.